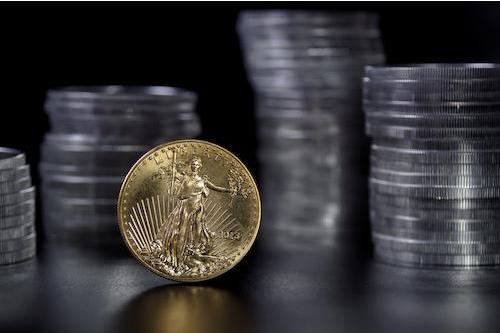 With the recent celebration of the 225th anniversary of the United States Mint, we will also be celebrating the 225th birthday of the ever-present Lady Liberty. Throughout the past few centuries, we’ve seen her on our coinage as a constantly evolving emblem. Lady Liberty has been depicted sitting or standing, with an ax or sword, her hair flowing behind her or pinned back, and more. Despite her many forms, we always recognize her as the symbol from which she began.

Before the establishment of the United States Mint in 1792 with the Coinage Act or Mint Act, American currency was comprised of a variety of foreign coins and tokens or coins created by individual states. A few years prior, the United States Constitution had been enacted, leading Treasury Secretary Alexander Hamilton to present a report to Congress with his recommendations for the beginnings of an official American currency.

The eventual Senate committee, chaired by Robert Morris, would follow these recommendations, and call for President George Washington to be depicted on one side of each coin leaving the mint. After some debate between the Senate and House, it was settled that, instead of our first president, each coin would have a depiction of something that we now know as Lady Liberty. The newly enacted law stated that “Upon one side of each of the said coins there shall be an impression emblematic of liberty, with an inscription of the word Liberty, and the year of the coinage...”.


In the beginning, the most noteworthy examples of Lady Liberty could be found on the silver dollar, though the idea of liberty was to be present on all of the half cents, cents, half dismes [sic], dismes, quarter dollars, half dollars, dollars, quarter eagles, half eagles and eagles Americans would now be able to spend.


Her first silver dollar is now commonly known as the "Flowing Hair" dollar. A few of the “Flowing Hair” dollars made it into circulation towards the end of 1794, and though the design was well liked, the press used in the minting process was found to be too weak for the proper striking of coins. A more powerful press was soon ordered to remedy the situation. 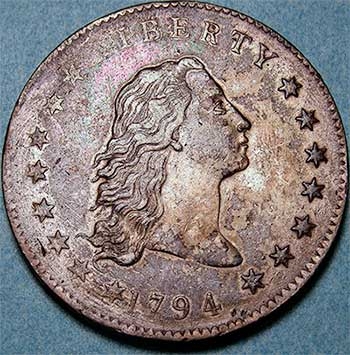 1795: The Next Coin With Lady Liberty


Despite the success of her design, the first depiction of Lady Liberty on these silver dollars lasted only a year or so before being replaced by the “Draped Bust” dollar in October of 1795. The “Draped Bust” iteration was produced until 1803, when a need for smaller denominations shifted the focus of the United States Mint. 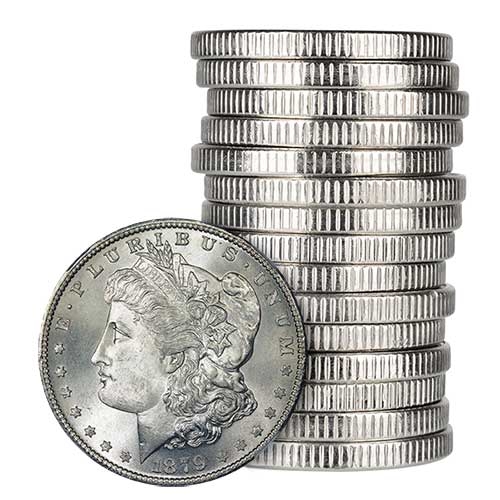 
The design for these coins and the silver dollars (which were reproduced until the 1850s) remained mostly unchanged until the “Gobrecht” dollar of 1836. The “Gobrecht” dollar and the "Seated Liberty" dollar that followed departed from the profiles and busts of past coinage. Here we find our evolving Lady Liberty seated, holding a shield in one hand and a flag in the other.


In 1878, Lady Liberty reverted back to a bust in profile view with the "Morgan" dollar.

The designer of the 1878 silver dollar, George Morgan, came to the United States Mint with the idea that Lady Liberty should be modeled after an American woman, rather than utilizing the traditional Greek features found on many currencies across the globe.

Shortly thereafter, Anna Willess Williams became the new face of Lady Liberty. Anna was a resident of Philadelphia and had what Morgan deemed to be a “perfect” profile.


During the Art Nouveau craze, Hermon A. McNeil showed us Lady Liberty at her most risqué. With an olive branch in hand, this depiction was meant to represent peace, but the 1916 quarter showed her standing between two pillars with one breast exposed. 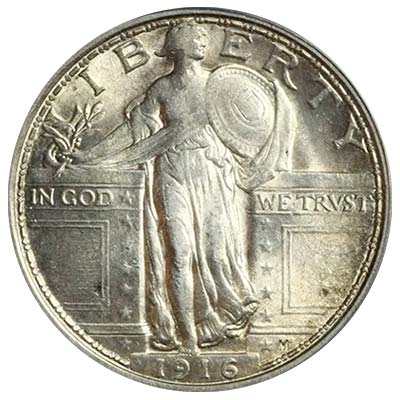 The release of the "Standing Liberty" quarter was met with immediate censure from the public, and the design was soon adjusted to present Lady Liberty in a full suit of armor. Rumor has it that McNeil was not pleased about this change and that the armor was an act of spite.


The year 1921 brings us another shot at a peaceful incarnation of Lady Liberty. We see her return to profile, but with a few new twists.

Earlier that year, a competition was held to find designs that represented peace. On the silver dollar that would later be known as the "Peace" dollar, Lady Liberty finds her representation in the multi-cultural depiction of her as a goddess. Artist, Anthony de Francisci, shows her brilliantly crowned and seemingly windswept, while the customary eagle on the other side of the coin holds an olive branch and perches above the word “PEACE”. De Francisci’s wife, Teresa, was the model for this profile of Lady Liberty, while the crown is meant to be reminiscent of the Statue of Liberty.


As Lady Liberty evolved, so did the coins commonly in circulation amongst the public. Lady Liberty has continued to be featured on many of our higher value coins, while the faces of President Abraham Lincoln, President Thomas Jefferson, President Franklin D. Roosevelt, and President George Washington have replaced her for everyday use. Eventually, she was joined by the likes of President Dwight D. Eisenhower, Susan B. Anthony and Sacagawea.

We’ve seen Liberty’s journey from being represented by one man to something of an ideal. Then Morgan took her from a classical Grecian appearance to a representation of American women. Liberty’s depiction was used to evoke peace when it was sorely needed in our country.


Today, Lady Liberty is evolving again – this time to even better represent the diversity of the American people.

Last year, the United States Mint announced that a commemorative hundred-dollar coin would be released to celebrate its upcoming 225th anniversary. One side will again feature Lady Liberty’s proud profile, but this time she’s African-American.

A press release from the Mint states:

"The 2017 American Liberty 225th Anniversary Gold Coin is the first in a series of 24-karat gold coins that will feature designs which depict an allegorical Liberty in a variety of contemporary forms-including designs representing Asian-Americans, Hispanic-Americans, and Indian-Americans among others-to reflect the cultural and ethnic diversity of the United States.”