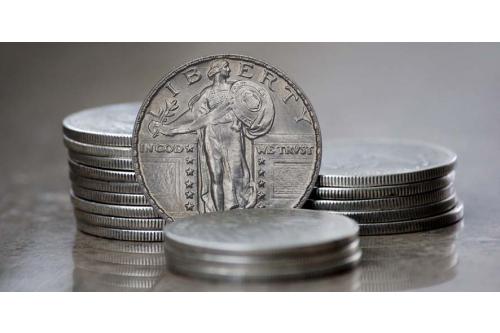 When it comes to rare silver coins, the Standing Liberty quarter is certainly one that has garnered a lot of attention from collectors and historians through the years. This rare coin was produced right after the Barber Quarter, between 1916 and 1930.

Its design was not needed at the time, though Robert W. Woolley mistakenly believed that the law required the creation of a new design. In a way, these silver coins have a tragic story attached to them due to the fact that they replaced the previous Barber coin designs.


Charles E. Barber was the Mint Chief Engraver who gave the world many noteworthy coin designs that were not received well by the public. His coin designs were for dimes, quarters and half dollars, which first went into circulation in 1892; not long after the nation's Civil War.

Those who know rare silver coins may know that these coins were so unpopular that several presidential administrations tried unsuccessfully to have new coins designed which would feature a more modern look. Not only would Barber's designs be replaced, but he would be required to help with the process of undoing the work he had spent so much time on.

One would think that Barber's story would be what those who seek out silver coins and their history would focus on, but it turns out that it is not always the case.


Instead, what fascinates so many collectors is the initial design by sculptor Herman MacNeil which featured Lady Liberty standing before a gate with a shield in one hand and an olive branch in the other. This design is believed to have been at least partially in response to the fact that when this coin was designed in 1916, the United States was embroiled in World War I.

However, it is not the shield, olive branch nor gate that interests many, but rather that fact that this particular Lady Liberty coin shows her with one breast fully on display.


Symbolism or Salacious? No One Knows.


The symbolism of the bare breast was not fully explained by the Mint nor the sculptor behind the design, but this first design would be discontinued in 1917.

There remains speculation among some historians that perhaps the partial nudity was considered to be obscene or the Treasury Department did not approve of the partially clad Liberty, but the verdict is still out on this and arguments among historians continue. The model for Liberty herself was a silent film star known as Doris Doree. There is a suggestion that the scandal surrounds her posing for the figure of Liberty.


Eventually, the obverse of the Standing Liberty Quarter would be redesigned, making the first design a far more rare coin in the process. The new design would not feature the infamous bare breast.

Instead, Lady Liberty would be clad in a suit of chain mail armor which would remain on these silver coins until their circulation was ended in 1930. Some believe that the armor is intended merely to reflect that the situation in Europe, associated with the first World War. The armor is believed to symbolize the fact that the United States would do whatever was needed to protect herself and the liberties for her citizens that she represents.

Among coin collectors, histories are often fascinating, but few are quite so intricate and laden with scandals as the history associated with the Standing Liberty Quarter.