The Curious History of the Morgan Silver Dollar 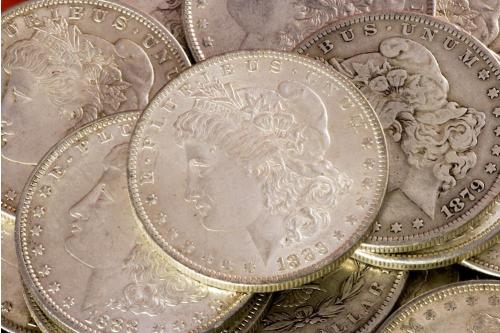 The Curious History of the Morgan Silver Dollar

The Morgan silver dollar was first minted from 1878-1904, and again in 1921. Following the passage of the Bland-Allison Act in 1878, which required the U.S. Treasury to purchase a specified amount of silver to be circulated as silver dollars, Morgan dollars quickly stockpiled in the Treasury and bank reserves.

The act was passed during the height of the bimetallism movement in America, or the use of both silver and gold standards. With tens of millions of coins minted in a particular year alone, Morgan dollars continue to be one of the most widely circulated silver bullion today.


How Much Silver is in a Morgan Dollar?

They contain 90 percent silver and 10 percent copper, which makes them easy to buy and sell at lower prices. Though Morgan dollars are often close to the spot price of silver, rarely minted, high-grade coins can sell for thousands of dollars.


The Demand for Silver Dollars

While Congress deliberated over the silver question in 1877, demand for a new silver dollar came from the Comstock Lode in Nevada, which was excavating massive quantities of silver. Mint Director Henry P. Linderman directed his chief engraver, William Barber, and his assistant, George T. Morgan, to create designs for a new silver dollar. The best design would prevail. The mint director, supposedly dissatisfied with Barber’s work, rigged the contest in Morgan’s favor, and Morgan’s design won.


The Design of the Morgan Silver Dollar

Morgan enlisted Philadelphia teacher, Anna Willess Williams, to model for his depiction of Miss Liberty. A left-facing portrait head of Liberty is featured on the coin’s obverse, with a somewhat gaunt eagle depicted on the back, giving the Morgan its nickname: “buzzard dollar.”

In an unprecedented move, Morgan initialed each side of the design with an “M.” Shortly after its first mint, critics noted the Morgan eagle mistakenly had eight tail feathers instead of seven, and therefore some 1878 coins may depict either, with seven being the rarer.

It’s reported that over half a billion Morgan coins were struck between 1878 and 1921. Most of the output came from the original mint facility in Philadelphia, while Carson City, New Orleans, and San Francisco sites also made them. Carson City ended production when it closed doors in 1893, later making them a valuable commodity among numismatists.

Even after minting ended in Carson City, the vault there stored millions of Morgans, which were transferred to Washington in 1900 and kept sealed. Later, in 1921, the Denver mint also produced Morgan dollars.

After passage of the Pittman Act in 1918, the Morgan dollar was reintroduced in 1921. The act mandated earlier Morgans — almost 270 million coins — be melted and replaced by the Peace design by the end of 1921.

The Pittman Act & the Growing Demand for Silver

The Pittman Act was largely a response to the growing demand for silver during WWI, as the world’s currency - gold - was no longer available. Britain faced another crisis in India, and used silver certificates to pay for the ongoing war efforts and to suppress rebellion in the colony.

Britain turned to America to purchase silver to back their certificates, and, combined with mounting pressure from Western miners to purchase their silver, the U.S. turned again to the Morgan dollar. Congress agreed to purchase bullion at above-market prices from mining companies after the war, and replace each melted Morgan coin with a new mint.

After the war, and as the price of silver rose again during the Great Depression, pressure from the mining industry again gave way to new silver policy, even while public demand for silver coins was low. Following the Silver Act of 1942, 53 million more silver dollars - both Morgan and Peace designs - were sent to the melting pot.

Notwithstanding massive melts, the Treasury, as well as banks and mints, amassed stockpiles of morgans in their vaults, as buyers in the 1930s typically sought out lower face-value coins.

However, during this time, the hobby of numismatics started to gain popularity, and Carson City Morgans and other rarer mints became popular among some collectors through the 1940s and '50s.


The Decline of Silver Certificates

In the early 1960s, Federal Reserve Notes began replacing silver certificates, and silver certificates were exchanged for silver bullion and granules, rather than in coins. This was a result of the rising price of silver, which gave investors an opportunity to redeem certificates at a high profit.

The treasury could no longer sustain the price of silver, and again liquidated hundreds of bags of Morgan dollar coins (each bag held 1,000 coins) between the years 1962-64.

The remaining Morgans held in the treasury’s vault were primarily rarer Carson City mints. From 1972-80, the government released these Morgans in mail-bid sales, generating a nice profit for the Federal Reserve.

During this time, interest in collecting Morgans gained steam again, especially after a 400 bag hoard (about 400,000 coins) was discovered in the home of the deceased collector, LaVere Redfield in 1977, selling for $7.3 million dollars. In the early 80s, the Continental Bank released a hoard of 1.5 million Morgans, further distributing them among eager numismatists.

The rarest of the Morgan dollars is the 1895 mint, often referred to as the “king of the Morgans.” Of 12,880 mints struck that year, only 880 survived the melting pot, making the 1895 Morgan extremely rare at the time. It’s estimated that 500 or less survive today.

In the early 1900s, a few investors and dealers collected them in hoards. Meanwhile, other Morgan strikes, such as the 1904-O, are very common, making regular appearances at auctions today.


How Many Morgan Dollars Exist Today?

In all, over 657 million Morgan silver dollars were produced over the years, with 96 date and mint varieties circulating the market. They were widely bought in the West, while they failed to gain momentum in the East.

Hoards remained untouched until the mid 20th century, which helps explain why many coins are in such good condition today. While Morgan silver dollars took decades to gain popularity, they retain a notable pedigree among collectors today.