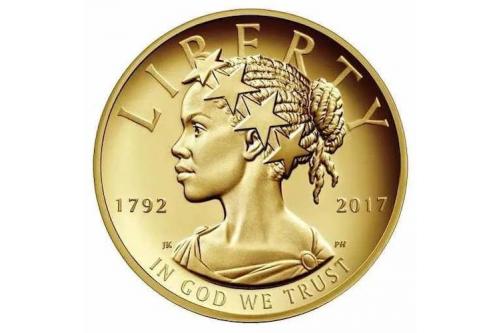 The Changing Face of Lady Liberty

For the first time in history, Lady Liberty is portrayed as a black woman on an officially minted coin from the United States Mint. The newly-released gold coin is designed in part to help commemorate the 225th anniversary of the Mint but also is a celebration of the diversity of the United States.

The coin is the first in a series of designs depicting Lady Liberty in a variety of forms, including Asian-Americans, Hispanic-Americans, and Indian-Americans and is part of a larger initiative to include more people of color on American coins.


A Move Towards Diversity in American Coinage


Leading the charge to “add an element of diversity in suggesting how America is remembered, as well as how those overlooked people of color who helped build America are remembered,” is the legendary basketball player, Kareem Abdul-Jabbar.

The CCAC was established by Congress in 2003 to provide guidance to the Secretary of Treasury on the themes and designs of all US coins and medals. Abdul-Jabbar’s interest in coin collecting and the intricacies of our economy led him to submit a formal application for the vacant position.

The author of several books dealing with race relations and the preservation of African-American stories within American history, Abdul-Jabbar believes Lady Liberty being depicted as an African-American woman is “a bold and refreshing course for the Mint. The coin is a fitting symbol for the 225th anniversary of the U.S. Mint. I love how they replaced the wreath across her head with large stars to represent a hopeful future as we strive to fulfill the promise of the U.S. Constitution.”

Abdul-Jabbar is not the only former African-American athlete changing the face of coin collecting and investing in precious metals. The U.S. Gold Bureau has two veteran precious metals specialists that are also former professional athletes.

Kerry Cash played college football at the University of Texas and was selected by the Indianapolis Colts in the 5th round of the 1991 NFL Draft. He went on to play six seasons in the NFL, including stints with the Raiders and Bears. After his playing career concluded, Cash returned to his college hometown of Austin where he looked to pursue another of his passions, precious metals.

After a decade as a financial advisor and helping clients with traditional investments, Cash began to understand the shortcomings of these types of investments when it came to protecting wealth in difficult times. Since 2012, Kerry Cash has worked as a precious metals specialist with the U.S. Gold Bureau, believing, “Whether in football, investing or life in general, if you want to have different results you can’t keep doing the same old things. Investors need to look at different options when securing and preserving their wealth.”

Cash believes the U.S. Mint has taken a historic step in the right direction by diversifying the depiction of Lady Liberty.

"Many people look to our coins and money as a representation of our country. By putting an African-American as Lady Liberty on an officially minted coin, it says to African-Americans and other minorities that we are valued and hold a place in the history of our great country. It also says to the rest of the world that diversity is a value that America holds dear and we may need that now more than ever.”

Kerry Cash is not the only former Texas Longhorn sports star to now have a starring role with the U.S. Gold Bureau as a precious metals specialist. Ron Baxter gained prominence as a member of the Texas men’s basketball team from 1977 to 1980. Baxter finished his career as the Southwest Conference Player of the Year, is still the fourth leading scorer and rebounder in school history and inducted into the Longhorn Hall of Honor in 2001. The Los Angeles Lakers drafted Baxter in the 1980 NBA Draft.

Baxter transitioned to the world of precious metals in 2011, and has been helping clients with investments in gold and silver ever since.

“Throughout the history of not just the United States but of civilization, there has been a monetary system based on gold and other precious metals. Gold coins have told the story of great civilizations like the Romans. Now that the U.S. Mint has decided to be more inclusive by using an African-American as Lady Liberty, I think all ethnicities feel like they have played a positive and prominent role in the history of our great country.”

Both Cash and Baxter also view the appointment of Abdul-Jabbar to such a prominent role in the design of American coinage as a historic step in the right direction. “He is seen as a prominent member of the African-American community and his example is something we should all strive to emulate,” said Baxter of Abdul-Jabbar. Cash added, “The life of Abdul-Jabbar, from humble beginnings, to stardom with the UCLA Bruins and in the NBA, and using his life as a platform to inform and educate others about the prominent role minorities have played in this country is inspiring.”

Lady Liberty is Only the Beginning

The historic release of the 2017 American Liberty 225th Anniversary Gold Coin, the appointment of Kareem Abdul-Jabbar to the CCAC, and the roles played by Kerry Cash and Ron Baxter at the U.S. Gold Bureau show the face of American coinage and precious metals is changing. As our country continues to evolve, so will American coinage. And the release of the 2017 Lady Liberty coin is just one step towards the inclusion and representation of all Americans in our monetary system.