Ahead to the Past: A Return to 1970s-Style Stagflation 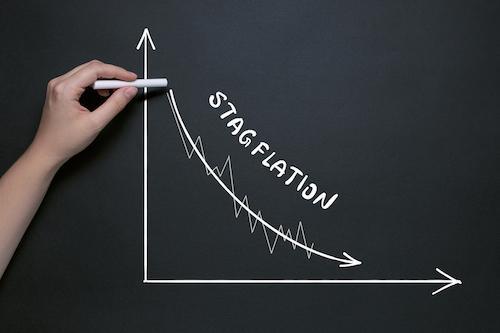 Ahead to the Past: A Return to 1970s-Style Stagflation

In the 1980s blockbuster Back to the Future, the characters teleport to a previous time by means of an experiment with a time machine that goes awry, after which, they have to try to engineer circumstances in the past to create the results in the future that existed before they left. If looking for the title of a movie describing the current financial scenario that is developing, we could call it Ahead to the Past, as we try to return to some sense of normalcy that seems to be escaping us. It appears that we are entering a situation similar to the worst conditions of the 1970s, while adding in new and unique economic challenges rarely seen before. In times like these, it is comforting to own an asset that has survived and thrived throughout history, no matter what the economic conditions happened to be.

Interest Rates Cannot Save Us Now

When we try to compare the situation developing today with some reference point in the past, it is important to note that no previous time matches perfectly. While interest rate policy is largely credited with ending the 1970s period of inflation, current and recent interest rate policies will be largely credited with sparking the current bout of inflation. Today, it will be much harder to blunt the impact of inflation using interest rates alone, due to the unprecedented debt levels we currently see. Interest rate levels in most of the developed world have been suppressed to the lowest levels we have seen in 5,000 years. Simultaneously, debt levels have risen to nearly unsustainable levels. A significant increase in interest rates today, in relation to the level of increase used to defeat inflation in 1980, would bankrupt much of the world.

Stagflation is the result of the unique combination of slow or negative economic growth and high or increasing inflation. While a period of stagflation was experienced around the world for over a decade in the 1970s and 1980s, it technically only lasted for a couple of years here in the United States. As the attached historical graphic indicates, there were several periods of recession in the U.S. between 1969 and 1982. There were also several periods of increasing inflation. But the unique combination of a slowing economy accompanied by rising inflation at the same time was mostly observed between 1972 and 1973. Even so, the pain of that stagflation extended beyond the dates of official recognition – both before and afterwards. Rationing became a reality in the United States for the first time since WWII. Anecdotally, I remember my parents in 1973 being eligible to purchase gasoline only on certain days, depending on if their license plate ended in an odd or even number.

Another difference between current conditions and those of the 1970s and 1980s is that instead of nations taking turns having inflation and/or stagflation, many current economic policies presumably leading to such economic troubles have been implemented simultaneously worldwide. Low interest rates and high debt levels are seen in most Western and developed economies around the world right now. It is those high debt levels that prevent most from being able to increase interest rates above the rate of inflation. A notable exception is found in Russia, which we highlighted a few weeks ago. It is somewhat ironic that the policies of sanctioning that have been intended to harm the Russian economy have helped make it more resilient in the face of international stagflationary conditions. With low debt levels and a significant portion of its reserves (20%) held in gold, Russia is positioned relatively well to weather the coming storm and thrive in the difficult period ahead.

What Can We Do About Stagflation?

We can blather on and on about how conditions are similar to those in the 1970s and 1980s and how they are different. But what matters most of all is finding solutions that will work for the average person living under these conditions. As individuals, we are sometimes limited in our ability to get world leaders to change policies in ways that make life better or easier for us. Sometimes, those with the ability to make decisions that affect us all have the best of intentions but implement harmful policies. It behooves us, as individuals, to learn to look out for ourselves and take steps in our personal lives that will help us become more resilient in the face of rising difficulties. Often, the same strategies that prove helpful for nation-states are helpful for individuals, and vice-versa.

If we look at the Russian model, that country has reduced its debt while increasing its gold holdings. We have long advocated similar steps for the average American. As business owners, my family and I were offered the opportunity to borrow money directly from the government during the COVID-19 outbreak at a fixed rate of 3.75% for 30 years. The government offered a hefty sum to help us “survive the pandemic.” As a financial analyst, I knew plenty of ways to invest that money to exceed 3.75% returns – including purchasing gold and silver. What I didn’t know was how much the government would later try to raise taxes to help pay for all the extra spending. I decided the peace of mind that accompanied remaining debt-free exceeded the marginal value extracted from earning a higher return on those funds. At the same time, my family and I have exchanged existing paper assets to increase our allocation of vaulted physical precious metals.

So far, our personal and business strategies of limiting debt while increasing precious metals is working pretty well. The government has already announced new plans to increase taxes on many types of gains, including capital gains. This means, if the proposals were to be approved by Congress and signed by President Biden, I would have been paying the government a steady 3.75% to use their money, plus an additional 30% to 40% of any earnings received from investing those funds. It would have been a win-win for the U.S. Treasury, but not a guaranteed win for us. Had the government offered us the 0.25% they offer the banks, it would have been a different story. The point to remember in all of this is that governments tend to love inflationary environments, as opposed to deflationary ones. The main reason is because they can tax the results of inflation as “gain,” while they have, thus far, found it difficult to increase taxes on gains that don’t exist.

As mentioned in last week’s Metals Minute, the latest idea being promoted was to tax “billionaires’ unrealized capital gains.” That means, if the proposal were to be approved, the government would impose a tax on the increased value of an asset before it was sold. So far, there has not been away thought of to increase taxes when there is a loss. This means it is in the government’s interest for wages to rise, asset values to rise, and property values to rise. Whether those values rise on their own due to organic growth or rise superficially due to the inflation caused by excessive currency creation, the government could generally tax the gains received either way. This is an excellent reason to own precious metals in physical form. Gold, silver, and the other precious metals have traditionally performed well in stagflationary environments and are not currently subject to taxation or reporting requirements for as long as you own them.