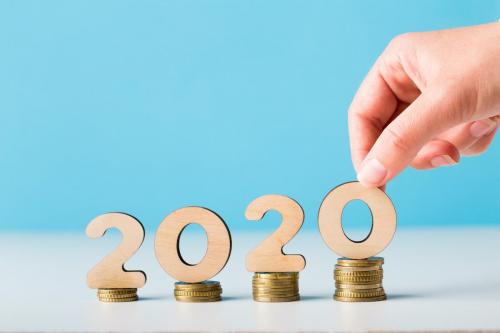 While we have not yet turned the corner on 2019, all eyes are looking ahead to 2020.  Looking over the horizon, we see both opportunities and warnings for the precious metals investor.

They say that to know how to get somewhere, it helps to first know where you are starting from.  In similar fashion, to understand the financial future, it helps if we can first understand the financial present.  Recession is not normally announced or known for sure, until several months after it has begun.  But from where we sit in late October 2019, it appears we may be headed for a slight recession.  We expect this will be announced formally sometime in 2020.  The question then becomes, what does this mean for the economy, and for precious metals?  If recent history is any guide, then recession will likely be kind to those holding Gold and Silver in 2020, and thereafter.  For holders of Platinum or Palladium, please keep reading.

There is a “recession test” involving interest rates, and something called a “yield curve inversion”.  The yield curve is normally a line gently sloping upwards, that represents the yield (interest rate) for US Treasury securities of various terms.  When the curve inverts, it means that interest rates are higher for 2-yr Treasuries than for 10-yr Treasuries.  It turns out that since WWII, every time the yield curve inverts for 3 months or more, it signals an approaching recession.  The yield curve inverted in May 2019, and remained so until October 11, 2019, thereby exceeding the 3-month threshold for an impending recession.  While some economists are saying “...it is different this time...”, we’ve all heard that before.  While there are sparks of life in many sectors of the US economy, we are still floating in a sea of nations facing significant challenges.  It will be nearly impossible for the United States to avoid the effects of the global slowdown that is upon us.

In the 2 most recent recessions (2001, 2007-2009), Gold performed relatively well.  While stocks careened southward during both recessions, Gold advanced at an annual rate of nearly 8% during the 2001 recession, and 11% during the 07-09 recession.  Incidentally, the 07-09 recession has been called the “Great Recession”.  To be sure, there were certainly days and weeks when Gold went up, and sometimes went down.  But from the beginning to the end of each recession period, Gold climbed at an annual rate of 8% and 11% respectively. Down periods during a recession offer good purchasing opportunities to add to a precious metals portfolio.  Following a recession, Gold has tended to continue it’s upward trend.

Recessions offer different opportunities for Silver, Platinum, and Palladium.  Normally, Platinum and Palladium have tended to move downward during recessions.  This would indicate that it might be worthwhile to look at your existing holdings of these 2 metals, and consider selling some of them between now and the end of 2019.  You can either reposition into Gold, investment-grade coins, or wait for a correction to re-enter the same positions.  Holders of Palladium should especially consider harvesting some phenomenal gains, before the slowdown in auto manufacturing takes effect in the Palladium market.  Platinum also tends to move lower during recession, but it has not reached the lofty heights that Palladium has.

With the Federal Reserve already moving into an “easing” stance, it looks like they are trying to head off the next recession before it starts, or at least minimize it.  My best guess is that they will not prevent a recession, but will have us climbing back out of recession in a short time.  We discussed here the likelihood that lower interest rates were probably in our future.  2020 is an election year, and politicians that want to be re-elected will do everything within their power to turn a recession around before Fall.  A short recession ending by late summer would place Gold squarely in the $1600-$1800 range by December 2020.  Silver should be $18-20 by year’s end, Platinum will fall to around $700, and Palladium would end the year between $900-$1200.

While we cannot know with certainty when the recession will begin or how long it will last, all indications suggest we will see one sometime in 2020.  While we may not know the exact price the metals will be in December of 2020, we are fairly confident of the general direction they will go.  Those who followed our projections for 2019 have benefitted handsomely, with Gold, Silver, and Platinum currently priced higher than projected.  Other investments are especially vulnerable right now, compared to the relative security of Gold and Silver.  The question then becomes, how do we respond to information/projections like this?

While no investment column or article can be construed as personal investment advice, there are some general principles that might prove beneficial to those in a position to take advantage.  Given the stated outlook for the economy, it may be advantageous to be a holder of Gold through the end of 2020 and beyond.  2020 may also offer occasions to purchase Gold at similar prices of today.  Between now (late October) and the end of 2019 may be a good time to evaluate gains in Palladium and/or Platinum, and consider locking profits in by selling.  The coming recession should offer opportunity to repurchase Palladium and Platinum at a price discounted from today.  2020 should also offer some opportunities to purchase Silver, but I would not be a seller of Silver at this time.  While the gains in Silver will not rival those of Gold initially, they do tend to follow shortly thereafter.

We do recommend that you discuss your personal financial situation with a qualified financial or precious metals advisor, before committing funds to any investment.

Posted in: Investing, Retirement, Silver, Gold, Platinum
By Bill Stack
More from this author
Did you like this post?
0
0
Related Posts
Search The Blog
Categories
Recent Posts