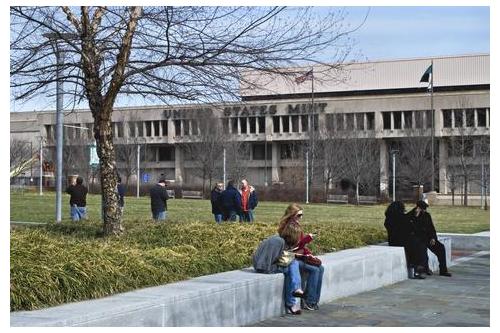 Gold
There has been much speculation about who the new Chairman of the Federal Reserve would be. We had hoped that by now, we might have some definitive information to share. But the indecision about this issue on behalf of the President, perhaps speaks to the complexities involved, and the lack of clear direction expressed by his economic advisors. The New York Times makes the case that this has been the most drawn out, dramatic choosing of the Fed Chair in our nation's history. The diversity of views held by the candidates, indicates that it is more than merely a choice between personalities. Instead, it is a decision about basic strategy and the desired future direction. Unlike previous Presidents, President Trump has the opportunity to name over half of the Fed Governors, early into his first term. Some are concerned that no matter who is the next Fed Chair, they will not be able to raise interest rates until it is too late. The danger is that deflation will win out over inflation, driving the 30-yr US Treasury yield closer to 2%. Who wants to tie up money for 30 yrs for 2%? Certainly not the investing public. The inflation rate reported by the government as the “Core CPI” has been under 3% for 20-years (see graph). 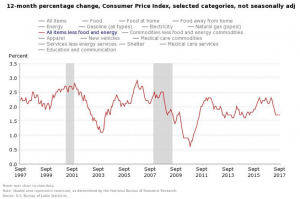 The above commonly used metric of inflation is not realistic, however. When looking at the 500 most commonly purchased items by American consumers, inflation is measured as 7-9% annually. This more realistic measurement of inflation is known as the Chapwood Index. As such, it makes no sense to keep money in a deposit product at 2-3%, when all that does is guarantee a saver to lose purchasing power over time. Even if President Trump becomes an inflation hawk, and appoints John Taylor as the new Fed Chairman, it is uncertain how high he would be able to increase interest rates. Due to the massive debts that currently exist on government balance sheets, even a slight increase in interest rates would spell trouble for a federal budget trying to digest a tax cut. This means that low interest rates could be in our future for a long time to come. When calculating the interest rates being earned by consumers today, compared to the rate of fees banks charge to maintain the accounts, many Americans are already living in a negative-interest-rate environment. As a recent article explained about one of the largest banks in the United States, $236 million of interest was paid to depositors, while $4.1 billion in fees were collected from the same depositors. This gives the average saver an average negative return of -0.64%, on funds they have on deposit at their bank. While the article only discusses one bank, there are certain to be others. If you compound the negative return of -0.64%, with the core average CPI of around 2.1%, that creates an overall negative (-) 2.74% interest rate realized by the typical bank depositor in America today. In other words, $100,000 deposited a year ago, would be worth $97,260 today. Not a very good return for funds held in an “insured” account. If we look at what happens when using a more realistic measure of inflation, such as 7%, that same $100,000 would be worth $92,360 in today’s money. The overall likelihood that the Fed will be able to hike interest rates to overcome the effects of the core CPI are marginal, at best. The ability of the most hawkish of Fed nominees to raise interest rates to counter the Chapman Index measure of inflation of 7%, would be nearly impossible. Should interest rates remain low for the foreseeable future, many have argued that it would be a boon for stocks. It might be. But as we have shown before, often the growth of stocks does not offset the weakness exhibited by a devalued fiat currency, such as the US Dollar. This environment seems to favor gold. Low (or negative) interest rates make holding gold or precious metals a safe and viable alternative, to a bank account that loses purchasing power, or to an elevated stock market that risks your principal. When we consider the alternative – that interest rates might rise significantly, this too would favor gold. At least in the current environment. This is because stocks are currently at record high levels. When interest rates rise, the value of existing stocks and bonds tends to go down. That is because interest rates are indicators of “risk-free return”. The higher the level of risk-free return is available in the market place, the less willing people are to take on risk. This puts pressure on investments such as stocks and bonds. When funds come out of stocks and bonds, it has to go somewhere. One of the few sectors that is not in bubble territory right now is precious metals. Those already positioned in metals before the bubbles begin to pop, will have a nice reward. If and when policy makers choose to raise interest rates considerably, it will likely be for one of two reasons. Either something drastic has happened in the economy, or on the world stage, and capital is fleeing the US, prompting a significant rate increase. In that scenario, many bubbles would have likely been popped, and assets left standing (precious metals) would benefit. The other scenario, could be that the Fed raises rates precipitously as a matter of course, which then causes the bubbles to pop as above. In either case, we see gold and silver as the beneficiaries. Under the more likely scenario of continuing down a path of sub-inflation-rate interest rate environment available for consumers, we believe that metals will benefit as well. In either case, we advocate owning gold and silver. Not so much as a speculative play to grow assets more than stocks, though that is possible. Nor do we expect the price of metals to be more stable than a bank deposit. But what we do expect, and what history has proven, is that precious metals is more effective at protecting your purchasing power in the future, than either stocks, or a bank account. That is something you can take to the bank, no matter who is appointed to be the Fed Chairman.