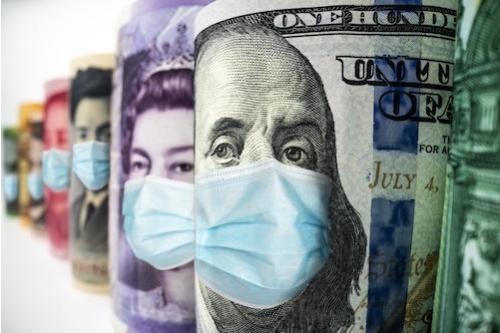 The last thing we wanted to talk about over the holidays was a new Covid variant, but it has arrived. It is best to face it head-on and prepare as best we can. As of Friday, the new variant, dubbed “Omicron,” had caused the worst Black Friday stock market performance in 70 years, wiping nearly 1000 points off the board. Energy and other commodity prices were also reduced, as the world tried to digest what another round of lockdowns might mean to the overall economy. Meanwhile, spot gold has risen $13 since the news of Omicron was released, and as of this writing, continues to rise.

So far, the symptoms of Omicron appear to be “unusual, but mild,” according to Dr. Angelique Coetzee, the physician who identified and treated the first known patients infected with the Omicron variant in South Africa. Symptoms observed so far include extreme fatigue, a high rate of pulse and headaches. Thus far, none of those identified and treated have required hospitalization. While this is good news, it is also the case that many of the nations where Omicron has been identified already had travel restrictions in place that allowed only vaccinated people to travel. So far, most of those identified with Omicron have been considered “fully vaccinated,” and the effects on the unvaccinated with or without natural immunity are unknown. One certain thing, is that the international movement of people and goods will become more restrictive as governments worldwide attempt to learn more about the effects of Omicron.

The initial drubbing of Omicron in world markets has been partially muted, as markets and energy prices have begun to move higher before the opening bell Monday morning in the US. While there have been two other variants identified (lambda and mu) that caused little reaction in world markets, neither of them were considered a “Variant of Concern” (VOC) by the World Health Organization (WHO). Omicron has already reached VOC status, due to high transmissibility and the possible ineffectiveness of public health measures to contain it. Current vaccines might affect the severity of symptoms associated with Omicron, but do not seem to prevent or slow the transmission of the disease. Manufacturers believe it will be at least a few months before modified vaccines become available that target the Omicron variant. In the meantime, it is prudent to consider what courses of action we can take to counter the likely effects, both physically and economically.

How the United States is Preparing

With the first cases already appearing in North America (Canada), officials throughout the United States are preparing for the inevitable arrival on our shores. President Biden has announced travel restrictions for those traveling from some nations to the United States and continues to recommend vaccines and booster shots for those interested in defeating the new strains of the virus. He does not foresee the need for lockdowns yet in the United States but left the door open for that possibility, based upon how things look in the future. As we are all aware, this situation is fluid and sometimes calls for changing actions on government. For now, the response is to encourage vaccines, masks, and shorter visits for those meeting with others in person.

We have to ask ourselves what all this might mean economically and what we can do to protect ourselves financially. While the authorities are still assessing the situation, it is impossible to know everything with the Omicron variant. But it is safe to assume that the tendency will be to make doing business more restrictive, not less restrictive. It is also likely that the international movement of goods will become more complex and expensive, not more accessible and cheaper. For these reasons, I expect the response to the Omicron variant will contribute to the stagflationary conditions we see building today for the following reasons.

Policies that make doing business more difficult tend to slow down economic activity. An economic slowdown describes a recession, which is half of the ingredients needed to create stagflation. When we slow the movement of people around the globe, it has a direct impact on the airline, hotel, and restaurant industries. Fewer people traveling also affects small businesses of every type and the income of the millions of Americans employed by them. Any adjustments made to accommodate the Omicron variant will require more, not less, such economic disruptions.

It is not only the movement of people that will likely be restricted but also the movement of goods worldwide that will slow. As we have already seen with the delivery delays of container ships stuck offshore near California, prices rise when demand stays constant and fewer items are available. As we predicted several months ago, even Dollar Tree stores are affected by shipping costs and the availability of products. They are raising prices 25% across the board to deal with inflation. The Omicron variant is likely to make shipping goods more time consuming and expensive, rather than quicker and less expensive. This feeds into the inflationary aspect of stagflation.

On top of a slowing economy and rising inflation, we also have the possibility of more government intervention in currency creation and injection into the economy. Whether in direct aid to consumers via stimulus checks, or direct aid to corporations or the banking industry, more currency chasing fewer goods also contributes to stagflation in two ways. It helps increase price inflation, as consumers flush with cash compete with one another for scarce items available on store shelves. It also slows down economic activity as labor shortages persist. While various stimulus programs exist, they sometimes disincentivize labor, which leads to more shortages, higher prices, and recession.

Taken together, Omicron may tend to push gold and silver further and faster in the direction they were already moving. While none of us want to see more sickness, more slowdowns, and higher prices, it often doesn’t matter what we want or don’t want. When dealing with the seemingly endless knock-on effects of this family of Coronaviruses, sometimes the best we can do is prepare to protect ourselves financially by committing some of our savings to that category of assets that has thrived in previous periods of stagflation. It is hard to do better in that regard than owning gold and silver.