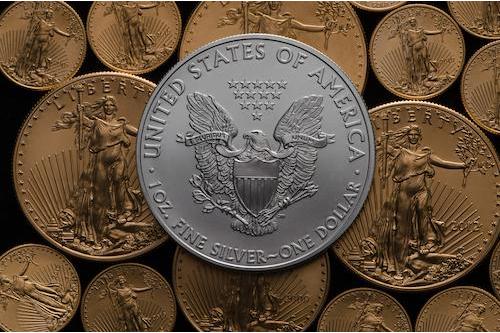 It might seem counterintuitive that slower growth in the economy could drive the price of anything higher, but with precious metals, this is often the case.  Today, we will discuss how and why we know economic growth is slowing and why that is a bullish indicator for gold and silver.

For the last few months, we have been discussing the idea of “stagflation.” As a brief review, stagflation describes a rare condition in economics in which prices are rising (inflation), while the economy is slowing (stagnation). Another term used to describe a slowing economy is “recessionary.” The most glaring recent example of a recession happened from 2007 to 2009 and was referred to as “The Great Recession” here in the United States. During this period, Americans lost 20% of their net worth, on average, as the value of holdings in real estate and the stock market imploded. Meanwhile, between April 2007 (Great Recession began) and June 2009 (Great Recession officially ended), the spot price of silver increased by 26%, while gold rallied 48%.

The most obvious ingredient in the recipe for stagflation right now is inflation.  Higher prices are evident to anyone who shops, purchases fuel, or pays a utility bill.  But slowing growth is more difficult to identify outside the realm of charts and graphs.  Thankfully, there are ample amounts of charts and graphs available to help forecast the direction in which we are headed and to provide us the opportunity to limit the effects of the next recession.  An important chart we highlighted on last week’s Metals Minute market update is from the National Federation of Independent Business (NFIB).  This survey of small business labor costs has accurately predicted future recessions since it was first published in 1973.  Every time the labor cost index reaches the level of “8” or above, a recession has followed within 19 months.  Readings are currently the highest on record, exceeding the levels seen before both the Great Recession and the last major period of stagflation (1970s).

By looking at a chart that tracks wages and inflation, we can see that wage growth for most Americans is up 12% since the low point earlier this year. Unfortunately, the gap between wages and inflation is even wider now than during the depths of the Great Recession. This means that costs have risen faster than wage increases for 80% of Americans. At the same time, the gap between input cost inflation (Producer Price Index, or PPI) and retail cost inflation (Consumer Price Index, or CPI) is the widest seen in at least 65 years. PPI often affects CPI, as manufacturers pass higher expenses on to consumers in the form of higher prices for finished products. But when wages rise more slowly than CPI, it means companies will produce less, since consumers cannot afford to pay more for their products. This is also an implicit indicator of a future recession.

Where Money is Treated Best

If the indicators are correct about a recession starting between now and the spring of 2023, why would that be a positive for gold and silver prices? There is an old adage about investing that says, “Capital moves to where it is treated best.” When a recession hits, stocks and other investments can often tank. Currently, the U.S. is experiencing a price-to-earnings (PE) ratio of 39, with stocks being more expensive than they were before the 1929 market crash (when the PE ratio was 33), the 1973 to 1974 period of stagflation (PE ratio of 18), and the Great Recession (PE ratio of 28). In fact, stock prices are currently at their highest points since before the DotCom crash in 1999 (when the PE ratio was 44). Reducing losses during a recession can often mean moving money out of stocks before those stock prices go down. But move the money where? Sometimes, money from stocks is moved into bonds or cash. But bonds and cash are also money-losing propositions in the current environment, due to inflation and low interest rates.

Currently, high inflation and low interest rates combine to create negative real interest rates on most bonds and banking products. This means that your purchasing power is eroded over time, and you end up with an asset – like a bond or CD – that is less valuable when it matures than it was when you purchased it initially. While this approach may slow the loss of capital when compared to greater loss potentials in the stock market, it still produces a loss, nonetheless. Even if the Federal Reserve wanted to raise interest rates, high national debt prevents them from doing so to the levels necessary to fight inflation. Since capital moves to where it is treated best, gold and silver are often the main beneficiaries during times of recession and/or stagflation. This is also true of the years immediately following previous scenarios that had circumstances like those we’re seeing now.

While stocks and real estate suffered losses during the Great Recession, silver climbed 26% and gold rose 48%. Over the next two years, gold continued to climb a total of 189%, reaching $1,928 in September of 2011. Silver climbed 262% from April 2007 to April 2011, reaching $48.91. But keep in mind, these price hikes were happening during a recession-only scenario, when many prices were dropping, meaning there wasn’t inflation being simultaneously experienced. There is ample evidence now that we are currently experiencing inflation, while also preparing to enter a recession. This combination, as mentioned earlier, is called stagflation.

The effects of stagflation on the stock market in 1973 and 1974 were as devastating as the effects of the 2007-2009 Great Recession.  But the follow-on impacts to gold and silver prices were much greater after stagflation than they were after recession.  As we have mentioned previously, gold climbed during stagflation and continued to climb afterwards, reaching prices eight times higher than where they started by 1980.  Today, gold and silver make up just a fraction of the $485 trillion of global assets in existence.  As people begin to realize we are moving into a period of recession and stagflation, many will begin moving assets somewhere they are treated better.  When it comes to stagflation, there are few places that treat money better than gold and silver.

Often, gold and silver mining companies are viewed as places to be, investment wise, when prices for the shiny metals are rising. While this is sometimes part of a winning strategy, it is important to remember the challenges that stagflation can bring to any business. One of the main causes of the 1970s stagflation was higher energy costs. Once again, we see energy costs rising. As you can imagine, mining is an energy-intensive endeavor. Higher energy costs affect the profitability of the mining sector in a negative way. At the same time, those higher costs also increase the floor prices for gold and silver to the levels necessary to pull those metals out of the ground and refine them. This is another reason I believe physical gold and silver should become a core investment position for those seeking to weather the period of stagflation we see building today.