Epic Battle of Paper vs Gold and Silver 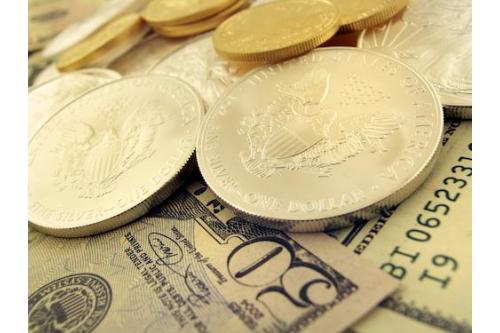 Epic Battle of Paper vs Gold and Silver

There is an ongoing battle between those who desire to control gold and silver and those who desire to own it.  At first, it may sound like the same thing, but it is not.  Those seeking control desire to manipulate the price, usually in a downward direction.  Those seeking to own usually desire protection from a paper money printing press gone wild.  Today, we continue to see great efforts expended in the futures markets to try and force down the spot price of precious metals.  At the same time, we see unprecedented demand for physical metal, against a backdrop of limited supplies and looming shortages.  This juxtaposition is causing a divided pricing mechanism to develop in the world of precious metals, where the paper spot price – i.e. the value of the U.S. dollar – has become disconnected from the price of the physical metal. Meanwhile, the stock market is currently at greater risk than precious metals, as the evidence outlined below suggests.

The way the world of precious metals investing used to work is that you would pay a small premium over the spot prices to purchase metals, and would receive a small discount from the spot prices when you sold the metals. In this way, the “spot price” was a close approximation for the physical metals’ prices. In today’s investing climate, you will pay $150 to $200 over spot for a one-ounce Gold Eagle coin, and $8 to $10 over spot for a one-ounce Silver Eagle coin. You will also likely receive a few dollars over spot to sell back either metal piece. What this means is that while efforts to limit the paper spot price – again, the value of the U.S. dollar – have been fairly successful, the ability to limit the underlying physical metal price has begun to diminish.

There is a repeatable pattern of activity by those seeking to control or manipulate the metals and push prices lower.  This pattern often involves a negative announcement by a major investment bank, such as Goldman Sachs or JP Morgan, which indicates it expects gold (or silver) to decline sharply, sometimes to a price level 50% lower than it is at the time.  This creates a negative feedback loop that helps to magnify the effectiveness of other efforts to reduce the price of the metals.  Additional efforts involve the selling of futures contracts connected to the metals, and/or the leasing of paper contracts connected to the metals. Selling “naked short” involves making a bet that the price will go down, while not having the metal to honor the bet, should the price rise.  It is like gambling with no cost except to the other players at the table, who are usually those who own physical gold and silver.

Another way to describe selling “naked short” would be like listing homes for sale that you didn’t own, in hopes of driving down the overall housing prices in a neighborhood in which you are interested in purchasing.  The idea is that when people see other homes listed for lower prices, they drop their asking prices, allowing you to purchase the homes before the ruse is discovered.  Often, massive amounts of paper claims for gold are sold on the Comex exchange, in order to hammer down the price of physical gold.  A large investor would normally try to conceal a large sale by spreading the transaction out throughout the trading day or week to keep from driving down the price received.  But when the goal is to scare the price lower, such trades are made in large batches, without regard for trading profits.  Here is an example of this happening last week, in the chart below.  As of Monday, February 8th, gold had already recovered from these losses.

We have discussed this type of fraud and manipulation before, highlighting how JP Morgan was recently fined nearly $1 billion for manipulating precious metals prices and treasury bonds. Ironically, the fines levied for manipulating markets are often paid by further manipulating markets, where $20 to $30 is gained for each $1 of fines paid.  Silver is likely the most manipulated asset on the planet, but the public is beginning to realize what is at stake and how to break free from the manipulation.  On February 4th, the bullion banks sold massive amounts of silver contracts seven different times throughout the day, each time knocking the spot price of silver down 1.5-2.0% in a matter of minutes.  But, each time, there was sufficient demand from those purchasing or demanding delivery of physical silver to force the price back up.  After being knocked down 11-14% by the professionals, silver owners rallied back to finish the day down just a few cents.

No Substitute for Physical Metals

Because demand for gold and silver is greater than the amount of gold and silver available for purchase, other substitutes have been created to soak up the demand.  One such substitute comes in the form of an Exchange Traded Fund, or ETF.  ETFs have been created to represent several sectors and subsectors in the marketplace, including within the precious metals sphere.  Instead of purchasing physical gold or silver, people sometimes purchase ETFs that are supposedly backed by gold and silver.  Two popular metal ETFs are GLD and SLV, representing gold and silver respectively.  Sometimes, there can be two to 300 paper ounces of gold or silver in the ETF for each ounce of physical gold or silver owned by the fund.  The graphic by Wall Street Silver below illustrates how elusive physical silver can sometimes be, when trying to locate it in an ETF.

When a few large fund owners begin to demand delivery of physical metal, or physical buyers outside the fund soak up available metal supplies, the Ponzi scheme of some ETFs becomes exposed.  When there is not enough metal to deliver as promised (such as right now), the terms of the contract allow further claims to be settled for cash instead of metal.  At that point, it becomes clear there was never enough gold or silver to back the ETF to begin with.  The entire strategy of buying GLD or SLV is thwarted when you can only get back the same paper currency with which you purchased the shares.  According to the terms listed in the respective prospectuses, owners of silver-related ETFs can redeem their shares in physical silver only in order sizes ranging from 10,000 to 100,000 ounces, depending on the ETF.  This means most investors have to redeem shares for cash, even when there is deliverable silver available.

Last year, the price of oil became so disconnected from its paper price (negative-$38 per barrel) that some oil-related ETFs disintegrated and ceased to trade.  Investors were left holding the bag, in some cases losing 90% of their capital.  The same thing is possible with precious metals ETFs, for the opposite reason. The best way to avoid the same sad result is to purchase physical gold and silver and hold those metals pieces in a vaulting system outside of the banking sector. In that way, not even a banking holiday can separate you from the financial protection purchased.

Posted in: Investing, Silver, Gold
By Bill Stack
More from this author
Did you like this post?
0
0
Search The Blog
Categories
Recent Posts