What You Probably Didn't Know About the Gold & Inflation Relationship 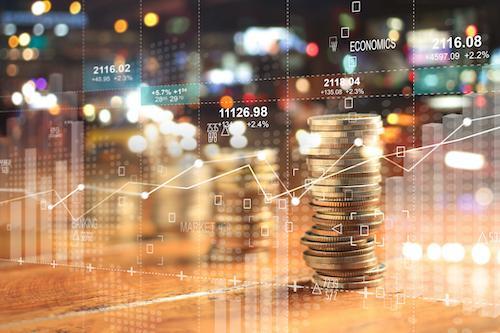 What You Probably Didn't Know About the Gold & Inflation Relationship

After years of hearing that inflation is low or negligible, it is clearly no longer the case. Not that it ever was the case, in recent history, but certainly not today. A trip to your local grocery store, car dealer, hospital, or post office will reveal that inflation has come. Granted, there was a time, for hundreds of years, when inflation was negligible (thanks to precious metals), but more on that later. What we really need to know today, is how do we deal with the inflation that is upon us now. As it turns out, there are two types of inflation we have to deal with. We will call one “official inflation”, that is, the inflation level often reported by government officials and financial pundits. The other we will call “actual inflation”, which is the inflation experienced by the average American living every day here in America. 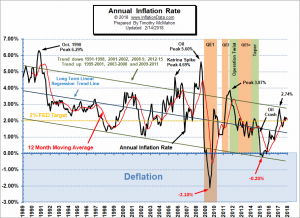 “Official inflation” is that rate of inflation reported in the Consumer Price Index, or CPI. This measurement, the CPI, is used by governments and corporations to adjust things such as interest rates, employee pension increases, social security payment increases, employee wage increases, among many others. For several years now, we have heard that the US Federal Reserve had set a target of reaching 2% inflation, at which point they would begin to raise interest rates. The problem is, CPI is discovered by looking backwards, at what has happened in the past. While the Fed Chairman in 2012 (Ben Bernanke) was saying they hoped to get inflation up to 2%, in July 2012, it was already over 3% (see chart). Last year (2017), the annual inflation rate topped out at 2.74%, and continues to be above 2% now. After many years of trying to increase official inflation, they have more than met their stated goal. 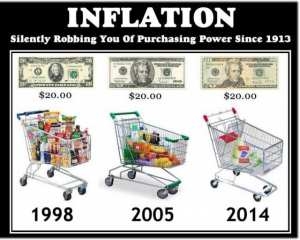 
“Actual inflation” is that rate of inflation experienced by the average American, living life here in America. This rate is generally much higher than the official CPI would indicate. As we wrote about previously here, there is a better measurement called the Chapwood Index, which measures the rate of price increases on things that most people purchase frequently. It is also tallied by region, which highlights the rates of inflation experienced in different parts of the country. The Chapwood Index survey of the 50 largest American cities indicates that actual inflation has averaged between 7.12% (Raleigh NC) to 13.08% (Oakland CA) every year, for the last 5 years. Think about that for a moment. Prices rising from 7-13% per year across America, while the “Official” CPI target was 2%. 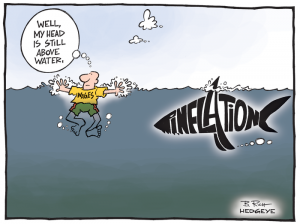 What this all means, is that the cost of nearly everything we use on a daily basis has been going up by at least 7% per year, depending on where you live. If you are on a fixed income (social security, etc), or have wages that are increased based on the official CPI, then your purchasing power is diminished 3-times more than the raises you receive. Therefore, unless you are able to make other adjustments, your standard of living begins to go down over time. Thankfully, we can make other adjustments to overcome this. There was a time in history when individual adjustments were unnecessary, when the currency used in circulation was gold and silver. Back then, prices remained relatively stable for hundreds of years. Unfortunately, no one alive then is still living. Today, we have to take responsibility for ourselves.


Barring some official changes to our currency, there is much we can do as individuals to defeat inflation. As it turns out, we can put some of our savings into gold and silver. As explained in “The 7.0% Solution”, the value of gold, throughout history has averaged a 7% increase measured in paper money terms. In other words, while doing nothing but sitting in a vault, gold can help keep your future purchasing power growing at or near the actual rate of inflation, over time. That is simple bullion, or melt value growth. The protection offered by numismatic coins, can sometimes be much greater. Some of the gold passed down from my great-grandfather has increased in value 130 times the paper money used to purchase it, in melt value. But the same gold has increased 210 times, in collector value. Either way, we are better off today, because of the steps he took back then. You and I can still take those same steps today. 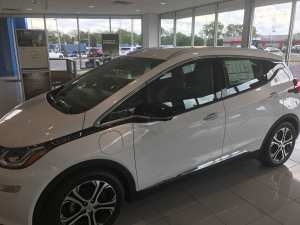 Inflation hit me in the face last week, when I took a car to the local dealership to be serviced. While there, I walked through the showroom, just to look. $43,000, for a cracker box of a car. Perhaps no one pays list price any more, but it was hard to fathom $43,000 even being the starting point for what I saw. Lumber prices are another example, recently reaching an all-time high. You could easily fill in the blanks, with a trip to the grocery store. Either what you have always bought now costs more, or the package size has gotten smaller, or both. “Shrinkflation” is when the cost of something is the same, but the size is smaller, such as when they substitute a 14.5 ounce can for the old 16 ounce can. It is everywhere.


Inflation Around the World


To be sure, there are places with much higher inflation. Places like Venezuela, or Argentina, where the “official inflation” is in the hundreds; and “actual inflation” is in the thousands. They would benefit by implementing the advice in this article even more than we would. The problem for them, would be having enough paper currency to exchange for real protection. We, on the other hand, have an opportunity to take advantage of the relative strength of the $US Dollar, to purchase some protection while it is temporarily on sale, in Dollar terms. The $US Dollar is the cleanest dirty shirt in the laundry, so to speak, when compared to many currencies worldwide.

As long as bankers and politicians are able to manipulate the quantity and value of our currency, there will be inflation. They want inflation, because they can call it growth, and tax it. Not only tax it, but tax it more. More sales taxes are collected from an item costing $12.56, than from one costing $10.00. More income taxes are collected from a salary of $58,000, than from $52,000. But when the dollars you are promised in retirement are only increasing at the “Official Inflation” rate, but life accelerates at the “Actual Inflation” rate, Gold can help you and your family close that gap, for a more comfortable future.

Posted in: Investing, Retirement, Gold
By Bill Stack
Did you like this post?
0
0
Search The Blog
Categories
Recent Posts