Venezuelan Gold to the Rescue 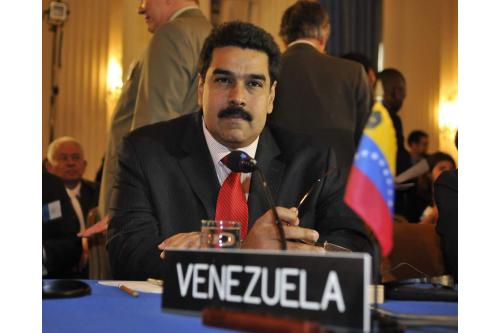 Venezuelan Gold to the Rescue

Gold
Whether there should be or not,  an intense international focus on Venezuela has arisen recently.  Part of this focus involves gold, and is a testament to how important precious metals have become on the world scene today.  While many governments don’t officially like to acknowledge the importance of gold as an important bedrock of the financial system, their actions often speak louder than words. While many consider the Dollar to be the center of the financial universe, some don’t have the luxury of living in that world.  Whether by sanction-induced poverty, or sanctions for sanctions sake, more than a few nations are prevented from using Dollar-based assets.  This requires them to look elsewhere to find the means to buy and sell in world markets.  Many of the nations under the most stringent sanctions by the US are oil producing nations, such as Iran, Russia, and Venezuela.  These nations have begun to trade oil directly for other goods and services available worldwide.  While Russia is able to sell energy directly to China for Chinese currency, Iran and Venezuela often trade oil for gold and other goods and services.  It is much harder to track who is using their sanctioned oil, when there are no electronic financial transactions involved with the sale.

Gold also came into view recently, when the government of Venezuela requested some of their gold that was being stored in London vaults be returned to them.  At stake is $1.2 Billion in gold bullion, stored at the Bank of England.  This makes up 15% of Venezuela’s reserve assets.  The US has pressured the UK to not release gold to the Maduro regime.  This speaks to the danger of storing your gold with a bank.  While some use the proverbial “bank box” to store precious metals here in America, you lose access when the bank is closed, or closed to you.  There are times of declared bank holidays, when no funds can be deposited or withdrawn, and bank boxes are locked down.  Like Venezuela, you could find yourself unable to benefit from the gold you own.  For this reason it is wise to consider non-bank storage, such as at the Texas Bullion Depository.

Currently, Venezuela has over $500,000,000.00 worth of oil sitting idly in tankers off shore, unable to be sold due to American sanctions.  Some oil is being transferred to vessels of unsanctioned countries at sea, to be sold on the black market.  Upwards of 8% of oil is sold this way, as we discussed earlier.  But that still leaves a lot of oil sitting idle, unable to have a positive economic impact on the lives of ordinary Venezuelans.  This is where gold has come to the rescue for Venezuela, and other nations in need of sanction-proof capital.  Gold is easier to store and transport than oil, and is easier to liquidate undetected on world markets.  President Maduro sold 3 tons of gold last month, and has removed 8 tons this month to sell or trade soon, to partners unknown.  The embattled regime is using gold as a lifeline, to purchase food and other goods needed by the citizens of Venezuela. Venezuela is believed to have an additional 140 tons of gold in storage there, as well as the 31 tons being held at the Bank of England.  They used 23 tons last year, to trade for various goods and services necessary for life in Venezuela.  It is interesting to note that when Dollars became unusable for international trade, gold helped keep them afloat.  Gold is a universal currency, known and accepted the world over for all types of goods and services.  An unknown amount of gold is also recovered each year by small, independent mining operations in southern Venezuela.  Many of these miners sell their gold directly to the government.  It is difficult and dangerous work, but it pays relatively well compared to the other opportunities available. It is hard to guess how long Venezuela might be able to hold off the US-inspired coup of the Maduro regime.  If we use last year’s 23 tons of gold as a guide, it would suggest 6-7 more years.  But with additional sanctions added each month by the Americans, it could be 3-4 years, viewing economic considerations alone.  Hopefully, the conflict will not morph into the military confrontation that some are implying could occur.  Right now there is not the appetite for US military intervention from the surrounding Caribbean nations, and an uncertain tolerance from the American public for such a conflict.  But American public opinion is no panacea.  Even though most Americans are in favor of ending the conflict in Afghanistan, a majority of US Senators (68%) recently voted to continue the 18-yr conflict there.  It remains to be seen whether the bellicose language on the part of a bipartisan coalition of American policy makers  translates into military intervention in Venezuela.

But how does this correlate to the lives of ordinary Americans?  Perhaps the US Government will not impose sanctions on us as ordinary citizens.  But there are various circumstances that can make assets and capital unusable or unavailable when we need them most.     Some experienced voices are warning that the financial markets have become unusually unstable and unpredictable.  Combined with unbearable debt loads carried by governments, corporations, and individuals, there seems to be little capacity available to soften or dampen any market mayhem that might arise.  Who wants to sell stocks or other equity-based investments when they are down 50%?  Unfortunately, many retirees find themselves in just such a position when markets are down, with living expenses that require ongoing income. While there are other products and strategies available (such as insured annuity contracts) to assist retirees with preserving assets and income production, sometimes long-term purchasing power is also a concern.  With retirees living longer today than most people used to, it is important to have a portion of our assets in some sort of strategic reserve.  Something that will be there no matter what economic mayhem may transpire, that maintains purchasing power in any currency, and something liquid that is acceptable for exchange worldwide.  Nations around the world recognize that something as...gold.  Earlier we wrote about a “Golden IRA Opportunity” available to American retirees, for just the same purpose. Hopefully, someday soon, Venezuela will be welcomed back into the community of nations and be able to use all its assets to provide for their people.  There are conflicting views about how that should happen.  It seems that the US, China, and Russia have all staked a claim and have different ideas, as do the Venezuelan populace.  But one thing is certain.  While mayhem and maelstrom surround Venezuela with their oil and Dollars largely unusable, they have been able to continue to eat and survive because they have a strategic reserve of gold.  Nations around the world have been stocking up on gold, for various reasons but to similar effect.

What is Your Gold Reserve?

What is your reserve?  We all need one.  Why not consider storing a portion of your assets in something that’s been tried and true for thousands of years, that many still use effectively today.  All it takes is a brief call to get started.
Posted in: Investing Gold
by Bill Stack
Did you like this post?
0