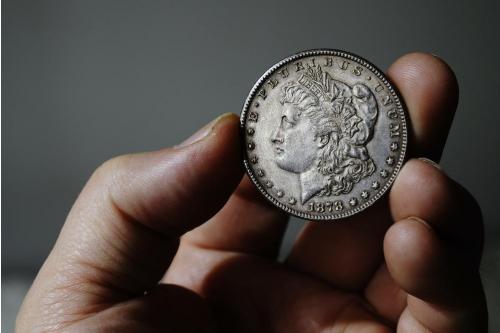 Silver is for second place. Everywhere from the Olympics to a children’s spelling bee we see the silver medal awarded to the second best and the gold reserved for the winner. We’ve been sold this order of things for centuries, but the world’s top five silver coins each come with their own significance and mystery AND a price tag that shows that silver hasn’t given up yet. In fact, it is a silver coin that holds the title of the most expensive coin ever sold.

The most expensive coin in the world is the silver “Flowing Hair” dollar. In fact, in January of 2013, one of these coins set an all-time record when it sold at auction for $10,016,875. In 1794, the Flowing Hair silver dollar was the first dollar coin ever issued by the newly formed United States Federal Mint. Less than 1,800 of these coins were found to be acceptable for circulation. The following year, this coin was produced at much higher numbers, estimated at over 160,000 in total. The coin debuted the depiction of “Liberty” (a concept required to be present on all United States coinage) as the familiar “Lady Liberty” we still see today. In addition to the historical significance of the Flowing Hair coin, it is estimated that there are only approximately 120 – 130 of these silver dollars are still in existence today.

Following the “Flowing Hair” dollar on our list of silver coins is the 1804 silver “Draped Bust” dollar. This coin is divided into three separate classes. Each class has its own price tag, but the “Draped Bust” dollar has sold at auction for amounts ranging from $2 - $4.1 million. In August 1999, it was sold for its highest price of $4,140,000. Much of the “Draped Bust” dollar’s value also comes from its historical significance, but the story of this coin is a little more complicated. Though these dollars feature a ceremonial date of 1804 on the front, they were actually minted between 1834 and 1860. They were first issued as gifts for a variety of Asian diplomats visiting the United States. The first “class” (Class I) of the coin is comprised of those intended for these diplomats and struck from the first mintage in 1834. Class II and Class III were mostly minted in unauthorized productions in the 1950s. These two sets of the coin are almost identical, but the newer coins, with slightly less historical significance, can usually be found for a lower price.

From 1878 through 1904, and again in 1921, the United States Mint went through a number of changes involving silver. Named after its designer, George Morgan, these coins are all difficult to find due to the passage and repeal of multiple laws regarding the Mint’s acquisitions and usage of silver. Due to the passing of the Bland-Allison Act in 1878, the United States Treasury was now obligated to purchase silver which then leads to the stockpiling of Morgan dollars in the Treasury and bank reserves. This makes just about any “Morgan” silver dollar the final coin on our list. These coins were struck somewhat sporadically at many of the new mint locations popping up all around the country, with “Morgan” dollars being struck at all locations. They were eventually replaced by the "Peace" silver dollar towards the end of 1921.

In 1885, another coin was minted with only five copies. This coin is known as the 1885 “Trade” silver dollar. These “Trade” dollars were minted specifically to be used for trade in East Asia, and when they were originally produced in 1873 most of them were sent to China. Mintage of the dollar continued at a normal rate until 1883 when a final minting that year was thought to be the last. However, in 1908 it was discovered that there were ten proofs dated (and theoretically produced) in 1884 and five in 1885. In addition to their limited number, these coins are interesting, because they were not intended for circulation in the United States. Regardless of intentions, in 1874 “Trade” dollars began to be reimported into the country due to changes in the value of silver and the value of the coins themselves. In an attempt to limit this, the United States government demonetized the dollars domestically and directed the mint to produce only as many as were required for trade. “Trade” dollars became legal tender again in 1965, but as a specimen was last sold in January 2006 to an anonymous collector for $3,300,000 one should think twice about using one at the grocery store.

Another coin shrouded in mystery, the 1894-S “Barber” dime is also extremely hard to find. Only 24 of the “Barber” dimes were minted at the San Francisco Mint, and we only know of nine in existence today. The most expensive of these was sold for $1,997,500 in January of 2016. This coin is part of a series known as the “Barber Coinage”. The series was designed by the United States Bureau of the Mint’s Chief Engraver, Charles E. Barber, and was produced between 1892 and 1916. Though most coins from the “Barber Coinage” series are relatively easy to find, the 1894-S dime is sought after due to its strange and limited mintage. It is unclear why the San Francisco Mint struck only 24 of these dimes. Theories run from the dimes being minted as gifts to their mintage being a quick way to fix a discrepancy in the mint’s annual audit. It does seem to be a lot of work for $2.40, but stranger things have happened, right? Rather than being like a second-place medal, the top five most valuable silver coins represent an ever-changing harbinger of mystery, better than any Sherlock Holmes novel. At the U.S. Gold Bureau, we’re looking forward to having you on the case. Any Sherlock, Watson, or Average Joe looking to learn more should contact a Precious Metals Specialist at (800) 775-3504.

Posted in: Investing, Silver
By U.S. Gold Bureau
More from this author
Did you like this post?
0
0
Search The Blog
Categories
Recent Posts