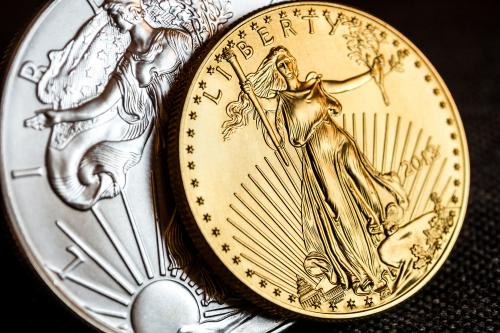 106 views
Gold Silver
We are now through the year’s halfway point and after a promising start the gold price has taken something of a knock as dollar strength and Fed interest rate policy has eaten into the spot and futures prices. The gold price in U.S. dollars tends to be inversely related to the dollar index (DXY). From the beginning of the year, the dollar index was relatively weak up until the middle of April and the gold price saw some strength over that period, peaking several times at around the $1,350 level where it ran into serious resistance. At that time end-year forecasts of plus $1,400 gold were looking conservative, but since mid-April, the dollar index began to rise – and the gold price to be marked down to a current level in the $1,220s as I write which makes some of the year-end predictions instead look very optimistic. But are they? Judging by the gold price performance to date this year, whether the price advances back to $1,350 and above is largely dependent on the performance of the U.S. dollar against other currencies. President Trump’s imposition and proposed escalation, of trade tariffs, appear to have strengthened the greenback, although when the tariffs were just threats analysts had largely seen them as negative for the dollar. There thus has to be the chance, as the tariffs bite, and tit-for-tat measures are put in place by the countries affected, that the dollar could turn round again and drop sharply, and gold rise as a result. But we may not see this until after the U.S. Labor Day holiday – on September 3rd this year – when the summer holiday period is seen as ending.

Thus, by Labor Day, the picture may be becoming a little clearer. Whether the U.S economy is likely to grow or decline as a result of the start of the tariff wars should be becoming more apparent. Whether the over-bought equities markets are beginning to turn down sharply may also be beginning to come clearer – and perhaps gold may be beginning to flow back into GLD again after consistent outflows since the end of April totaling around 77 tons. This latter has been one of the contributors to gold’s recent price decline helping mitigate any supply shortfalls as well as having an impact on pricing sentiment. But, there is the Trump factor out there which could swing things either way. Perhaps the most divisive U.S. President ever seems prepared to jump in all guns blazing – figuratively so far – and is thus making enemies across both the domestic and international political spectrum. Even so, perhaps this shake-up is what the global political scene needs from time to time. Many of President Trump’s utterances have needed to be said out loud for some time but the thoughts he has expressed have always previously been clouded by diplomatic niceties and fudging. That is not Trump’s way! What does have to be worrying is his unpredictability and that some of his obviously strongly-held beliefs may be counter-productive and his business type judgment that what appears to be the stronger economic hand will always win the day may not always work. In global politics, this may not prove to be the case with other charismatic leaders taking their followers down a conflicting path, regardless of the likely economic – or even military – consequences.

Long term though one remains a gold believer.  Peak gold – in that global production is unlikely to rise to any significant extent over the next several years – indeed is more likely to start to fall – coupled with the ever-continuing growth in purchasing power of gold-oriented consumers, notably in countries with expanding economies like China, will likely squeeze the supply/demand balance for the yellow metal.  Central banks seem to be upping gold accumulation too, with Russia, in particular, maintaining steady purchases currently at over 200 tons annually. There is also the strongly held belief that China too is increasing its gold holdings, but not reporting these increases to the IMF.  China’s gold holdings are a state secret and it only tends to announce any increases at multi-year intervals when it deems it opportune to do so, and even then there is no guarantee that any announced figure is an accurate representation of the Asian Dragon’s true gold reserve position.  China and Russia both seem to believe that gold still has an important role to play in the global financial system.  That most major central banks are reluctant to dispose of their gold holdings seems supportive of this viewpoint. But what is long term?  It’s an indefinable measure which could mean months or years.  We still think there’s a chance of something of a gold reset in the current year and the precious metal will end up at a higher level than it is now.  If equities start to crash, as they well might be given how nervous they are looking at the moment and given the myriad of doom and gloom predictions by respected analysts and commentators, a gold price reset could occur quicker than many think. A word of warning here though.  Should equities crash they could bring the gold price down with them – at least temporarily.  We saw this happen in 2008 as investors and funds struggled for liquidity and had to sell good assets, like gold and silver, in order to stay afloat.  But gold, in particular, made a spectacularly rapid recovery moving up sharply when equities were still falling and then going on to hit new highs until that particular bubble burst three years later.

So where does that leave us in the current year?  Unless equities crash and assuming they hold their value until the year-end then we would still forecast the December gold price north of $1,350, but perhaps short of the $1,400 level.

However there’s also much geopolitical uncertainty out there and an increase in rhetoric, or action, from the seemingly unpredictable Trump camp on say Chinese trade, the South China Sea, North Korea or Iran, to name but a few potential flashpoints, could give gold a further boost.

International diplomacy under President Trump’s purlieu has entered a new contentious era.  His bull-in-a-China-shop global negotiating tactics could well usher in a new era for safe havens like gold, while his domestic star is also not shining too brightly following his summit with President Putin, which has even been branded treasonous by anti-Trump elements.  Writing as a third party observer one feels the summit was a positive move in terms of a potential easing of global tensions, but anti-Russian paranoia runs deep in the USA so who knows what will happen domestically? One suspects that some of the sillier anti-Trump statements may drive even more people into the President’s camp. He may be divisive but still has a hugely strong following in the electorate as a whole.

Posted in: Investing, Silver, Gold
By Lawrie Williams
Did you like this post?
0
0
Search The Blog
Categories
Recent Posts