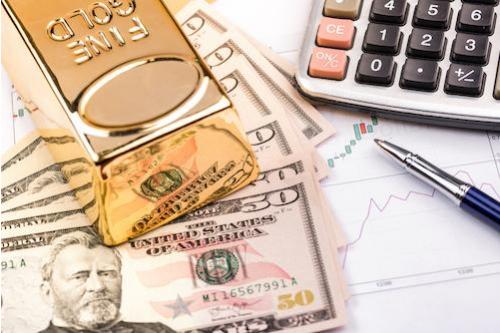 What if every time you went to purchase something in the future, you always had more funds available than the cost of the items purchased? How much of a problem would that be? That would be a great kind of problem to have. On the other hand, how difficult would life be if every time you went to make a purchase in the future, the cost was greater than the funds available? This is what life can be like for those that choose not to protect themselves against the ravages of inflation with Gold and Silver. Meanwhile, Gold seems poised to continue a significant move higher, from a pattern similar to that of 2004 (see chart below).

Some view Gold and Silver as a form of financial insurance against a crash in the stock market, a crash in the value of the Dollar, or some other financial calamity. Even if the Dollar does not crash as some believe it might, the value of the Dollar has been eroded steadily over time. Gold and Silver are considered insurance against that as well. But what happens if none of this occurs? What if the stock market doesn’t crash, and the Dollar stays strong? What if there is no more inflation, only deflation? That is like asking what happens if you have fire insurance on your building, but there is never a fire. Most people would consider it a blessing to not have a fire, and chalk up the cost of the insurance to peace of mind.

Sometimes insurance comes with a “return of premium” feature, whereby funds used to pay premiums are returned if the insurance coverage is never activated. That is what it is like owning Gold and Silver. They have been proven effective at protecting purchasing power through inflationary environments, and during seasons of market chaos. But even without those conditions, your investment in precious metals never goes away. If 20 years from now a gallon of milk costs the same as it does today, and price inflation never appears, you do not lose the value of precious metals you may own. Just like a policy with a “return of premium” feature, the Dollars used to purchase Gold and Silver do not go away. They are still there, stored within the metal itself, and able to be converted back into Dollars at any time.

Something that not all economists agree on is a simple definition of inflation. Some define inflation as an increase in the money supply. Others point out that it is the velocity of money, not the quantity of money that matters. Others believe any discussion of inflation is irrelevant unless a corresponding increase in prices develops. Others would interject that the phenomenon of rising prices is a subsequent effect of inflation, and not the inflation itself. But however we define inflation, it is better to be prepared to deal with inflation than to ignore it. When was the last time you heard about the dangers of deflation, or of the suffering that resulted from people paying lower prices at the store for the same items they purchased a month earlier? Likely never. While some believe deflation is possible before inflation takes hold, it is inflation that requires preparation.

Inflation is somewhat paradoxical. It is the stated goal of the Federal Reserve to create inflation, but the definition of inflation has been changed frequently to keep the number low. Since 1980, adjustments have been made to the CPI (Consumer Price Index). While this has helped to keep the CPI lower than it otherwise would have been, it has also changed what it measures in the real economy. The CPI is an important component used to determine COLA (Cost of Living Allowance) increases for salaries, Social Security, and other government benefits. But today’s official CPI does not fully account for the true inflation rate experienced by present day consumers and tax payers. To capture the rate of cost increases from purchasing common, every day items over time requires us to consider the “Chapwood Index”, which we informed our readers about here in 2018.

To overcome the effects of inflation over time requires us to store our savings in something tangible that accumulates value at a rate higher than inflation. Even if we use the Federal Reserve stated goal of 2% average inflation, it is difficult for many savers to accomplish this without making changes in how they save. This week I received a call from someone complaining about their savings account. Their statement indicates they received $11 interest for the month, on an account exceeding $100,000. This works out to about 0.132%. Using the inflation goal of 2%, this means their savings is losing purchasing power at the rate of 2.0 - 0.132 = 1.868% per year. At this rate for 10 years, their $100,000 would be worth $82,948.89 in today’s Dollars. As terrible as that sounds, it is not the half of it.

If we look at how the CPI used to be calculated in 1980 and before, we would see a rate today that is similar to the Chapwood Index. Thankfully for us, these rates are still calculated by economist John Williams at shadowstats.com. As the chart indicates, CPI is currently near 8%, when using the old method of calculation. Using the prior example of earning 0.132% in a savings account, would be like losing 7.868% of purchasing power each year. After 10 years of “saving” $100,000 this way, the account would be worth $45,412.14 in today’s Dollars. This is not the result most people expect. The important question is, what can be done, and how much does it cost?

How about free? What if the cost was zero, to protect yourself from inflation. If we look at Gold and Silver not as an investment but as an alternate form of currency, then the answer becomes more clear. By exchanging Dollars into Gold, for example, we have a “currency” that has performed well over time vs a devalued Dollar. Granted, there are small fees to exchange one form of currency into another, but compared to the inflation protection received, the fees can be negligible. And what if this metal currency can be inherited by family members, and used by them in the future as an ongoing form of financial insurance? Whoever heard of an insurance policy that remains in effect after death, with no additional premiums? Precious metals have been protecting families from the effects of inflation for generations.

Posted in: Investing, Silver, Gold
By Bill Stack
More from this author
Did you like this post?
0
0
Search The Blog
Categories
Recent Posts