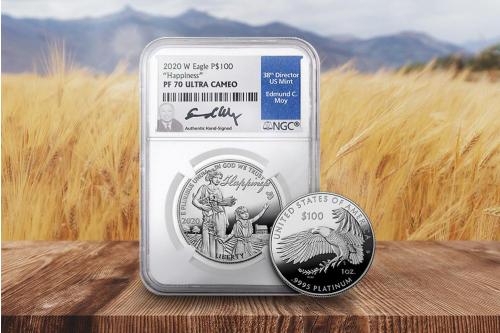 Rounding out the month is our second American Eagle Launch of 2020! The 2020 Platinum American Eagle Proof coins are currently available here. Adding to the fanfare surrounding the launch is the fact that this year’s issue is the third and final installment of the special “Preamble to the Declaration of Independence” series.

In 2018, the U.S. Mint kicked off a three-year run of special-edition Platinum American Eagle Proofs to celebrate the dawn of the coin’s third decade in production. Each of the three Platinum Eagles in the series features a unique obverse image representing one of the “unalienable Rights” guaranteed by the Declaration of Independence: Life, Liberty and Happiness. The series started with “Life” in 2018, followed up with “Liberty” in 2019 and now draws to a close with “Happiness” in 2020.

Clients of the United States Gold Bureau will have the opportunity to add one of these Platinum beauties to their portfolios shortly after the Mint’s launch. All 2020 Platinum American Eagles purchased through the U.S. Gold Bureau will bear a perfect PF70 grade, as deemed by the Numismatic Guaranty Corporation, and will be accompanied by a certification label hand-signed by former U.S. Mint Director, Ed C. Moy. Read more about these unique value-adds below and sign up here to be the first to know when your 2020 Platinum American Eagle Proof is available for purchase!

What does the 2020 Platinum American Eagle Proof look like?

As part of the Proof Platinum Eagle special-edition “Preamble” run, the 2020 issue understandably shares many common traits with its predecessors. For one, each of the three coins has featured the same reverse design in 2018, 2019 and now again in 2020.

The reverse image depicts a glorious American eagle descending in flight, wings wafting softly as it nears the ground. The eagle clasps an olive branch in its talons and is surrounded by the words, “UNITED STATES OF AMERICA” to the top and the coin’s precious metal contents, “.9995 PLATINUM” to the bottom. The coin’s $100 face value, “1OZ.” weight and the designer’s initials, “PLM,” are also inscribed on the reverse.

The reverse imagery was created by Artistic Infusion Program (AIP) Designer, Patricia Lucas-Morris, especially for the limited-edition run and appears on all three coins in the series.

As in years past, the 2020 Platinum Eagle Proof is struck at the West Point Mint and as such, bears the “W” mintmark indicating its origins.

But what sets this current-year issue apart from the others is its unique obverse design that epitomizes the third right guaranteed by the Preamble to the Declaration of Independence: the right of all people to the pursuit of happiness.

While all three coins in the “Preamble” series depict the concepts of American life and values, this final issue adds its own unique chapter to the story.

A young Lady Liberty is pictured standing in a tilled field while she cradles an overflowing cornucopia in her right arm, which is packed with fruits presumably harvested from the land on which she stands. According to the U.S. Mint, the bounty of the cornucopia represents the nurturing only Liberty can provide to “nourish the body, enliven the mind, and satisfy the soul.” She looks on at a girl playing in the field who grasps an olive branch in her right hand and beckons a butterfly with her left. One could imagine the two side-by-side characters epitomizing the vitality that flourishes under Liberty’s caring watch.

The 2020 obverse image bookends the story of American life told over the course of the three-year run; a life marked by hard work, insatiable curiosity, unwavering ingenuity, and the opportunity to enjoy the fruits of one’s labor.

The Mint points out that the humble farmhouse, silo, and orchard represented in the background of the image aim to symbolize “American hopes, values and aspirations,” which one could take to mean the hope of prosperity, the value of home and the aspirations of being able to provide for one’s family.

A particularly intriguing aspect of the obverse design is the inscription of the word “Happiness” in the top right corner. Representing an exact replica of the handwritten word in the Declaration of Independence, the lettering on the coin includes the outstretched “s," which, according to the Mint’s description, is a letterform typical of the time during which the Declaration was drafted. Such style, the Mint points out, is no longer common in present-day American penmanship.

Why should I invest in the 2020 Platinum American Eagle Proof?

The 2020 Platinum “Happiness” Proof Eagle may be particularly alluring to investors given that the coin is the last in the three-part “Preamble” series. Additionally, with lower mintage and product limits than in years past – 13,000 this year versus last year’s 15,000 and 2018’s 20,000 – the coins will be the rarest of the bunch, potentially adding to their draw.

While cumulative sales figures from the U.S. Mint show that neither the 2018 nor the 2019 Proof Platinum Eagles have sold through their respective mintage limits, it’s worth noting that the spot price of platinum has increased more than $150 per ounce over the last year (from January 1, 2019 to January 1, 2020), which may entice more investors to buy in to the Proof Platinum Eagles in 2020.

As mentioned at the top of the article, investing with the U.S. Gold Bureau allows our clients to add a perfect-score PF70 2020 Platinum Eagle Proof to their portfolios. Our inventory of Proof coins is made up almost exclusively of PF70 pieces, the highest grade available from the Numismatic Guaranty Corporation. NGC has long been a trusted partner of the U.S. Gold Bureau and is one of the leading third-party coin grading outfits in the world. The company has been issuing reliable and guarantee-backed coin certifications since 1987.

Additionally, each 2020 Platinum American Eagle Proof coin purchased from the U.S. Gold Bureau will come with a certification label hand-signed by former U.S. Mint Director, Ed C. Moy. In addition to honorably serving as the 38th Director of the United States Mint from 2006-2011, Moy has earned an impressive reputation as a revered economist, author and public servant. Read more about Moy’s legacy here.