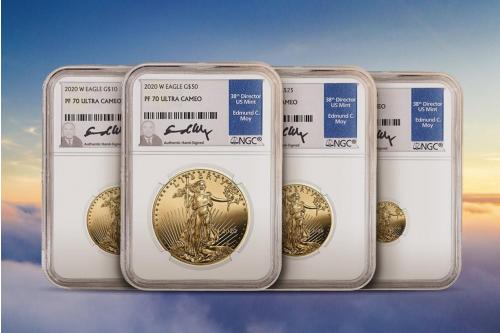 In case you’ve been living under a rock, these past few weeks have been a wild ride across the globe. The novel Coronavirus disease (COVID-19) has officially taken hold in the United States as other countries continue to struggle with the impacts of the outbreak on daily life.

It’s difficult to do anything these days without being slapped in the face with exponential amounts of ever-evolving Coronavirus news. And with good reason. Not only is the spread of the virus crippling healthcare systems around the globe, but its impact on local, state, and national economies has also been severe and pervasive. While it remains to be seen what the actual short and long-term effects will be, one thing for sure is that now, perhaps more than ever before in modern times, consumers are desperately seeking safe and reliable ways to protect their wealth.

With news that feels ever more dire with each breaking headline, it’s understandable that investors are spooked, and markets are teetering, if not altogether tanking. While it’s important to recognize that yes, the recent losses across stock, bond, and other markets are real and significant, it’s in times like these that it is crucial to stay the course and continue keeping an eye toward long-term financial health, wherever and whenever possible.

If the recent turbulence in spot prices of gold and other precious metals have you jittery, but you’re still seeking a way to safeguard your hard-earned wealth into the future, there are other hard asset options to help diversify your portfolio and weather this current economic storm.

A great example of such a vehicle is investment-grade pieces like the 2020 Gold American Eagle Proof series.

As in years past, the Mint is slated this year to produce full-ounce, half-ounce, quarter-ounce and one-tenth-ounce versions of the Proof coin, all of which will contain 91.67% gold, 3% silver and the balance copper.

To fulfill our mission of providing the highest quality service to our clients and be the premier supplier of precious metals in the industry, the United States Gold Bureau is happy to announce that we, too, will be offering all sizes of the 2020 Gold American Eagle Proof coin for individual sale, or as a four-piece set.

Shortly after the Mint’s release, the U.S. Gold Bureau began to offer the perfect-score PF70 2020 Gold Eagle Proofs, all of which will be accompanied by an exclusive certification label hand-signed by former U.S. Mint Director, Ed C. Moy, a unique value-add available only to U.S. Gold Bureau clients.

Edmund C. Moy served as the 38th Director of the U.S. Mint under George W. Bush, and during his tenure, oversaw the launch of the 50 State Quarter program, the Presidential $1 Coin and the National Parks Quarter program. Additionally, Moy steered the Mint through the financial crisis of 2008 and the ensuing recession, which triggered unprecedented levels of demand for gold and silver bullion. Investment pieces accompanied by the Ed Moy signature label have gained widespread appeal, leading to high demand, low volumes, and often impressive returns. Read more about the Gold American Eagle Proof series and our Moy labels here, and sign up here to receive the latest updates and announcements on the 2020 Gold American Eagle Proof launch.

How are investment-grade pieces any different than bullion, especially in today’s economic climate?

While gold and other precious metal bullion are traditionally revered as stable alternatives to often more volatile stocks, bonds, and even fiat money, spot prices of commodity metals do still ebb and flow like any other market.

Investment-grade, or “Proof,” pieces, on the other hand, are less tied to markets and their related spot price fluctuations than other hard assets. Instead, Proof coins derive most of their value from qualitative factors like rarity and strike quality. Thanks to increasing demand and a fixed supply, Proof coins have maintained a more stable value trajectory over the past several years than many of their commodity metal counterparts, even outpacing bullion performance in many cases. Read more about why the U.S. Gold Bureau recommends investment-grade Gold American Eagles to our clients for long-term financial protection and potential growth here.

Additionally, evidence shows that unique value-adds like the United States Gold Bureau’s exclusive Ed C. Moy hand-signed certification label mentioned above generate additional appeal and generally drive higher returns for these investment grade items. NGC’s handy Price Guide shows that Gold American Eagle Proofs with Ed Moy labels have maintained higher values than those without. For example, 2019 Ed Moy Gold Eagle Proofs enjoyed values of $3,750 as of late October 2019, whereas "First Day of Issue" Eagle Proofs of the same year rung in at $2,030, and “First Releases” and “Early Releases” were both valued at $2,025 as of late August 2019.

Two thousand eighteen figures show a similar story, with “Moy Signature” Proofs valued at $4,500 as of October 2019 and the others ringing in approximately $2,500 less.

Bullion precious metals will likely remain a secure way to safeguard wealth in the long run, thanks to their inherent physical values. But if a less market-based option is what you're seeking right now (or in the future), investment-grade pieces could be a good option for you to diversify your portfolio in these unsettling times.

What else should I know about the 2020 Gold American Eagle Proof Coins?

The Gold American Eagle was authorized by the Gold Bullion Coin Act of 1985 and first released in 1986. The coin was created as a way for the United States to stake a claim in the world’s gold bullion market, which was reaching a fever pitch in the late 20th century thanks to the exceptional performances of coins like the South African Krugerrand and the Canadian Maple Leaf.

The Gold Eagle is offered in four sizes – one full ounce, half-ounce, quarter-ounce and one-tenth-ounce, each containing their respective troy-ounce weights in 22-karat gold, guaranteed by the United States government. The coins carry legal-tender face values of $50, $25, $10 and $5, respectively.

Proof versions of the coin have also been struck since the mid-1980s. In the first year of the series’ run, the Mint issued only a one-ounce version of the Gold Eagle Proof coin, followed by both one-ounce and half-ounce issues in 1987. In 1988, the Mint began releasing all four denomination options in Proof form on an annual basis. The only gap was in 2009 when no Proof Gold Eagles were issued at all. Due to drastic increases in demand for bullion resulting from the global financial crisis, the Mint's focus remained on producing those products to meet consumer requests and uphold their legal duty of supplying the U.S. financial system with Gold Eagle bullion coins per the 1985 Gold Bullion Coin Act.

Each Gold American Eagle, regardless of size or classification (i.e., bullion or Proof), contains 91.67%, 3% silver, and copper to balance – or 22-karat gold. This alloy composition is also an English standard traditionally known as “crown gold” that results in durable products typically more resilient and resistant to wear and tear than pure gold pieces. The “crown gold” alloy had not been used in the United States since 1834, making the Gold American Eagle’s 1986 initial run the first time in 150 years the composition was produced.

All sizes of the coin come in both Proof and Bullion versions, with each bearing the same rendition of the legendary Augustus Saint-Gaudens Double Eagle design on their obverses. The imagery has been struck on the coins’ “heads” sides since their initial release in 1986. The design, which features Lady Liberty striding forward with what can only be presumed to be the dawn of a new day radiating behind her, was originally struck on the pre-1933 $20 Saint-Gaudens Double Eagle.

All versions of the Gold American Eagle have also had the same reverse design since the series’ inception: sculptor Miley Busiek’s “Family of Eagles,” which depicts a father eagle delivering an olive branch to his mate as she cradles their young eaglet in a nest.

As in years past, all denominations of the 2020 Gold American Eagle Proof coin are minted in New York state at the West Point Mint.

As we reported in January, a reverse-side design overhaul has been announced for both the 2021 Gold and Silver American Eagle bullion coin issues. According to Coin World, Treasury Secretary Steven Mnuchin has given the go-ahead for the U.S. Mint to replace reverse designs of both bullion coins to, as the report puts it, “accommodate the use of anti-counterfeiting technology at the production stage.”

Although the same report also states that redesigns of the Gold Eagle Proof versions “will be introduced later,” we wouldn't be surprised if 2020 is one of the last years we will see the “Family of Eagles” imagery on the backs of the Gold American Eagle Proofs.

While time will tell what impact such a change may have on the performance of the 2020 Gold American Eagle Proofs, long-term values could be driven higher by increased appeal, demand, and scarcity of the original Busiek design.

The recent economic fallout from the global Coronavirus outbreak indicates that now is the time to think seriously about and take measured actions toward bolstering your long-term financial health. Storing your hard-earned wealth in investment-grade precious metals like the 2020 Gold American Eagle Proof coin could be a prudent way of safeguarding your assets and weathering the current financial storm.

Purchase the 2020 Gold American Eagle Set here. We also encourage you to give our team of Precious Metals Experts a call today to learn more (800-775-3504).