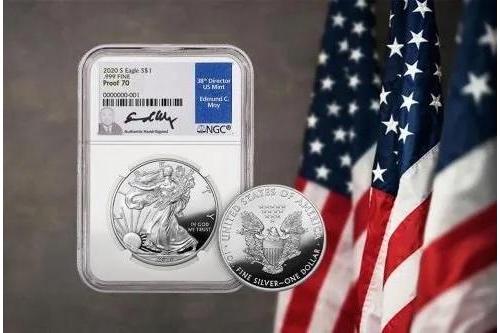 January is upon us, and that means a new year has begun. And not only is it a new year but the dawn of a new decade. Kicking off this decade in style is the U.S. Mint’s first American Eagle launch of the year!

The U.S. Gold Bureau offers an investment-grade coin inventory made up almost exclusively of perfect-grade PF70 pieces, as deemed by the Numismatic Guaranty Corporation.

As with all of our PF70 coins, U.S. Gold Bureau 2020 Silver American Eagle Proofs will be accompanied by an exclusive certification label hand-signed by former Director of the U.S. Mint, Ed C. Moy when it releases in early February.

While the investing world looks forward to this release each January, the coin has been primarily struck in the same fashion and with the same design for its entire 35-year tenure. Making the 2020 version unique, however, is the fact that it could mark the end of what may come to be known as the Mercanti Heraldic Eagle subtype. Since its initial release in 1986, the reverse of the Silver American Eagle has featured John Mercanti’s image of a heraldic eagle bearing a shield on its chest and clasping an olive branch in its right talon and a bundle of arrows in its left.

This image has come to be virtually synonymous with the Silver American Eagles, and to see it go is undoubtedly a significant turning point in the numismatics world. While the 2021 redesign is announced officially for Silver Eagle Bullion coins, CoinWorld is reporting that the Proof iteration’s overhaul “will be introduced later.” However, we wouldn’t be surprised if 2020 is indeed the last year Mercanti’s heraldic eagle will grace the backs of these silver investment-grade pieces. Regardless, being one of, if not the last in the Mercanti-designed run, the 2020 Proofs will almost certainly be met with increased anticipation and heightened levels of fanfare. CoinWeek is already likening it to the 1958 Lincoln cent, the 2008 Lincoln Memorial cent, and the 1998 Washington Heraldic Eagle quarter, which are all "modern-era coins whose ongoing obverse design types remained essentially the same even after the reverse motifs saw a permanent, more drastic change.”

Following the Mint’s launch this week, U.S. Gold Bureau clients will have the opportunity to snag one of these last Mercanti Proofs for their investment portfolios.

The U.S. Gold Bureau offers an investment-grade coin inventory made up almost exclusively of perfect-grade PF70 pieces, as deemed by the Numismatic Guaranty Corporation. As with all of our PF70 coins, U.S. Gold Bureau 2020 Silver American Eagle Proofs will be accompanied by an exclusive certification label hand-signed by former Director of the U.S. Mint, Ed C. Moy. These one-of-a-kind labels have made headlines thanks to the heightened popularity and potential for increased premiums brought to the investment coins they accompany. Additionally, because the labels are offered exclusively through the U.S. Gold Bureau, populations of Ed Moy coins are relatively low as compared to the general supply, further adding to the prestige and rarity of the coins.

Why is the Silver Eagle reverse design changing?


If the Mercanti-created Silver American Eagle reverse design has proven so successful and enjoyed such fondness over the years, why go to the trouble of changing it?

In an age of increasingly sophisticated counterfeiting operations and campaigns to inject fake coins into global markets, the precious metals industry has instituted an initiative to fight back and protect the integrity of the nation’s circulating and investment-grade currency.

In 2016, the Industry Council for Tangible Assets (ICTA), a trade association and industry watchdog serving the “coins, currency, and precious-metals bullion communities for over 35 years,” formally launched the Anti-Counterfeiting Task Force (ACTF). As stated on its website, the ACTF’s primary missions are “to educate law enforcement authorities and policy makers and to make them aware of the rising threat of counterfeiting, to mobilize law enforcement to attack counterfeiters where they are most vulnerable, and to provide expertise and other resources in the investigation and prosecution of counterfeiters and those involved at all levels of their distribution networks.”

Presumably stemming from such education and awareness efforts by industry and subject matter experts, Treasury Secretary Steven Mnuchin recently gave the go-ahead to the U.S. Mint to replace reverse designs for both the gold and silver 2021 American Eagles. The overhauls will accommodate enhanced anti-counterfeiting technology to stave off the circulation of fake precious metals pieces.

While specifics surrounding new design features and security enhancements have understandably been kept tightly under wraps, there are a few points investors can most likely count on in the modern era of gold and silver American Eagles.

For one, the so-called Liberty Coin Act that authorized the production of Silver American Eagles beginning in 1986 requires the image of an actual eagle to appear on the backside of the coins. As such, investors and numismatists can rest easy that while the reverse design will indeed look different from Mercanti’s artistry of years past, it will carry forth the same eagle-centric theme inherent in the coins’ existence.

Secondly, CoinWeek predicts that the forthcoming 2021 anti-counterfeiting features will likely resemble those already implemented by other nations. For example, Canada has worked with Arjo Solutions and their Signoptic authentication and identification technology to add a Bullion DNA visual authentication feature to their Maple Leaf bullion coins. The Bullion DNA allows dealers and investors “to quickly verify the authenticity of each protected Canadian Maple Leaf,” according to the CoinWeek article.

While we don't yet know what the new U.S. Mint enhanced security features will exactly look like, it stands to reason that some things, like those points noted above, will likely help shape the implementation of the new production methods.

The Design for the 2020 Silver American Eagle

For 2020, the Silver American Eagle Proof will maintain the same obverse design it has all along – Adolph A. Weinman’s famed “Walking Liberty” design, which was initially struck on the Walking Liberty Half Dollar from 1916 to 1947. The image shows a dynamic Lady Liberty striding forward, right arm outstretched toward the sun cresting over a mountain range. In her left arm, she cradles a bundle of laurel and oak branches – signifying triumph and peace, respectively – while the American flag flows around her shoulders. The words “IN GOD WE TRUST” is imprinted on two lines to the right of Lady Liberty, along with “L I B E R T Y” struck along the top rim of the coin and the mintage year along the bottom.

The 2020 Silver American Eagle Proof also maintains the same specifications as in years past. The coin will contain one troy ounce of .999 fine silver and will measure approximately 1.6 inches in diameter. The edges are reeded, and the coin carries a $1 legal tender face value. The coins will again be struck at the West Point Mint in West Point, New York, and will bear the "W" mintmark on the reverse alongside the weight, face value, and precious metal fineness.

Additionally, there are no mintage, product or household purchasing limits set for the 2020 Silver American Eagle Proof, just as there were none in 2019.

The Silver American Eagle Proof will almost certainly continue to be a valuable addition to investment portfolios of all shapes and sizes. With the impending end of the Mercanti-designed reverse, the 2020 issue could prove to be even more lauded than its predecessors, a fact that continues to add to the coin’s appeal as its release draws near.

Ready to learn more about adding a 2020 Silver American Eagle Proof coin to your own precious metals holding? Give our call of Precious Metals Experts a call today (800-775-3504)!