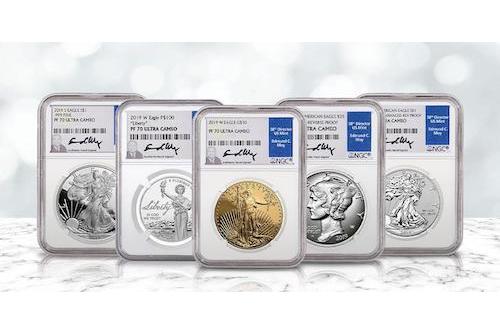 December is here, and we're officially in the home stretch of 2019. As the end-of-year festivities get well underway, we wanted to take a step back from the churn of the holiday season and reflect on some of our favorite coin launches of 2019.

Every year, the U.S. Mint keeps the investments world on its toes with its reliably jam-packed lineup of gold, silver, platinum, and palladium coin releases. While 2019 was certainly no exception, we were thrilled to see a few new works of art and fresh takes on old favorites released alongside industry mainstays.

Pro tip: If you’re looking to treat someone special this holiday season, or perhaps on the hunt for the perfect addition to your own investment portfolio, the United States Gold Bureau offers all of these top-five coins in perfect-score PF70 condition, as graded by the Numismatic Guaranty Corporation. Give our team of Precious Metals Experts a call (800-775-3504) or visit the below individual product pages to learn more!

So, without further ado, we bring you: The United States Gold Bureau’s Top-5 Favorite Coin Releases of 2019!

While this precious gold coin is struck every year in the same design and to the same specifications, we couldn’t help but include it in our top-five list. It’s one of our favorite pieces on the market and is a tried-and-true addition to any investment portfolio.

Not much was different from last year’s Gold American Eagle to this year’s, save for the Mint not imposing a product limit in 2019 (the product limit was 25,000 in 2018). The piece was struck in the same 22-karat gold it always is and also bears the same legendary image it has in years past – the pre-1933 Saint-Gaudens Double Eagle design initially struck on the $20 U.S. double eagle coin from 1907 to 1933.

Also as in years past, and as mandated by the Gold Bullion Coin Act of 1985, the U.S. Mint released full one-ounce $50, half-ounce $25, quarter-ounce $10 and one-tenth-ounce $5 iterations in 2019, providing a variety of ways to invest in this cherished line of gold pieces.

Although this coin does not see many changes year over year, it’s undoubtedly one of the darlings of the investments sphere, earning it a spot on our list of favorite releases from 2019.

Every year since 2017, the U.S. Mint has issued a current-year iteration of its Palladium American Eagle coin. This year, we got a real treat with the announcement of a new take on this three-year-old piece: for 2019, the already eye-catching Palladium Eagle was minted in the striking and intriguingly unique Reverse Proof finish. This year, Adolph A. Weinman’s famed “Winged Liberty” design was cast with frosted fields and smooth, mirror-like devices, whereas the opposite was true in years past when the coin was struck in the traditional Proof finish style.

Additionally, the U.S. Mint doubled its production numbers for this year's issue from 15,000 coins in both 2017 and 2018 to 30,000 pieces in 2019. Despite all the excitement surrounding the coin's new finish, demand didn't match sales expectations. Whereas the 2018 issue of the Palladium Eagle sold out within five minutes of its release, the 2019 issue struggled to sell even one-third of its 30,000 mintage limit on its debut day in mid-September. In fact, as of the publication of this blog post, the coin is still available for purchase directly through the U.S. Mint.

Despite all these woes, the 2019 Palladium American Eagle was still one of the most exciting coin releases of the year. A Reverse Proof coin is always an exciting addition to the market, offering a refreshing and unique take on otherwise traditional and expected aesthetics.

While the Platinum American Eagle was released for the first time more than 20 years ago, the Mint began an exciting three-year design series in 2018 that keeps the release of the coin fresh and anticipation high.

The unique series, dubbed “Preamble to the Declaration of Independence,” featured a new coin design in 2018 and 2019, and will release its final design of the trilogy in 2020. Each new design release aims to embody the essence of the Declaration of Independence and represents one of the “unalienable Rights” outlined in the foundational document: Life, Liberty, and Happiness.

The 2018 Proof Platinum Eagle epitomized the first of the three – Life – with its depiction of a young Lady Liberty teaching a child to sow seeds in a sprawling American field. This year, with its pictorial nods to freedom, exploration, and the American rule of law, the 2019 “Preamble” Eagle exemplified the second unalienable Right: Liberty. 2020 Eagles will embody the third: Happiness.

Even though the Platinum American Eagle has been issued every year since 1997, this new design campaign is a refreshing approach to a long-term standard-issue coin. That’s why it is one of our favorite releases of the year.

Back again as a stand-alone item, we were in for a real treat with the Mint’s second-year-in-a-row release of the much-lauded Silver American Eagle S-Mint coin in 2019.

While the East Coast strikes are highly revered today, the allure of the coin's West Coast roots never wore off. The desirability of the "S" mintmark on Silver American Eagles has remained so high that in 2012, the U.S. Mint reintroduced the San Francisco Mint iterations in a limited-run reboot. This 2012 issue was offered exclusively as part of a commemorative coin set that befittingly celebrated the 75th anniversary of the San Francisco Mint being housed in its current location. Five years later, in 2017, the Mint released two more limited-run series – the first as part of its annual "Congratulations Set" and the second as part of its 2017 Limited Edition Silver Proof Set. Finally, in 2018, the beloved S-Mint Silver Eagle was available to investors as a stand-alone item, marking the first time since 1992 such an offering was made.

While the specifications, composition, design, and other characteristics of the coin largely remain the same year after year, the exciting continuation of the "S" mintmark has earned this mainstay a spot on our 2019 top releases list.

Continuing the theme of innovative takes on standard coin finishes, we were consumed with anticipation upon the announcement of the Mint’s 2019 Enhanced Reverse Proof iteration of the beloved Silver American Eagle.

The 2019 Enhanced Reverse Proof is the newest incarnation of the Silver American Eagle, and the first time the finish is being offered on a stand-alone Silver Eagle piece. The Enhanced Reverse Proof Silver American Eagle was sold earlier this year alongside the Canadian One Ounce Silver Maple Leaf as part of the Pride of Two Nations set. Still, coins bearing this finish have not been available on their own until now.

Sales of this beautiful new Silver Eagle iteration did not disappoint. The number of orders reached the Mint’s limit of 30,000 within 20 minutes of the coin’s release, proving to be one of the most successful coin releases of the year in terms of speed of sales. The impressive fanfare and market demand surrounding this coin have catapulted it to the status as one of the most covetable, in-demand, and rare Silver Eagles on the market today – the first being the 1995-W Silver Eagle. That’s why this piece enjoys the number-one spot on our list of 2019 top releases.

As another year and another decade draw to a close, we hope you'll take a moment with us to step back from the grind of the holiday season and reflect upon the momentous year that 2019 has been for the U.S. Mint and precious metals coin investing.

Posted in: Investing, Silver, Gold, Platinum, Palladium
By United States Gold Bureau
Did you like this post?
0
0
Search The Blog
Categories
Recent Posts