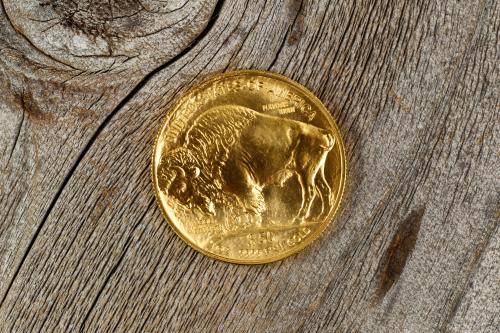 gold coins American Gold Buffalo Proof 70 Coins
Each year, the U.S. Mint publishes a full calendar of coin releases that mark everything from milestones in our nation's history to celebrations of notable American leaders. Up next in this year’s lineup is the 2019 Gold American Buffalo Proof coin, set to be released by the U.S. Mint at noon eastern time, Friday, April 12. The United States Gold Bureau clients will have the opportunity to purchase the 2019-dated coins from our inventory shortly after the Mint's release date. We are proud to offer an inventory of proof coins certified in perfect “Proof 70” grade,  accompanied by a certification label hand-signed by former Mint Director, Ed C. Moy. This unique value-add is an exclusive feature available only to U.S. Gold Bureau clients. The Mint began issuing the Gold American Buffalo in 2006, and 2019 will mark the 14th installment of this much-loved American coin. The Gold American Buffalo Proof is the “collector version” of the United States’ official Gold American Buffalo Bullion Coin. The Gold American Buffalo was initially conceived as a vehicle by which the United States could compete in the immensely popular global 24-karat gold coin market. Before the Buffalo's existence, many American investors turned to foreign coins to meet their 24-karat, 99.99% pure gold needs, simply because there wasn’t a domestic option available. As a result, international pieces like Canada’s Gold Maple Leaf were catapulted to the top of global markets, leaving the U.S. behind on the 24-karat gold front. The United States saw an opportunity to capitalize on this highly in-demand sector, and in 2005, authorized the so-called “Presidential $1 Coin Act.” In addition to commemorating nearly all of our country’s past presidents via $1 coins, as its name implies, the new law also required the Mint to begin producing a one-ounce, 24-karat gold coin. The new coin would be legal tender and carry a $50 face value, although the dollar amount is largely nominal since the coin’s market value, based on metal content, has always far surpassed the face value and is more than $1,300 today. The Gold American Buffalo remains to this day one of the purest gold coins in the world. The coin’s initiation marked the first time that the United States offered a 99.99% pure gold coin for public investment and quickly allowed the country to gain solid footing in the global 24-karat gold coin market. While much has been written about the origins, history and general fanfare of the Gold American Buffalo, it’s worth revisiting why this piece of American numismatics is a worthwhile investment.

Why should I invest in the Gold American Buffalo coin?

From seasoned numismatists to those just starting in precious metals investing, the Gold American Buffalo has often served as an excellent addition to investment portfolios of all shapes and sizes. Aside from being the first-ever 24-karat, 99.99% fine gold piece produced by the U.S. Mint for public consumption, the Gold American Buffalo stands out as a key piece for many reasons. For one, the Gold Buffalo celebrates one of the now most iconic coin designs in American history: James Earle Fraser’s 1913 Type I Buffalo nickel. This striking design speaks to the roots of American history and the natural and cultural heritage upon which the United States was built. The 21st-century Gold American Buffalo bullion and proof coins display a modified version of Fraser’s early-20th-century design, which boasts a Native American portrait on its obverse and an image of the American bison on its reverse. Fraser’s new Buffalo Nickel design - or Indian Head as it's sometimes called - was part of an ongoing effort spearheaded by American leadership of the day to “beautify” American coinage. Once adopted, the design appeared on U.S. 5¢ coins from 1913 to 1938. The run included a few tweaks along the way, shifting the design from what was dubbed Buffalo Nickel “Type I” to Buffalo Nickel “Type II.” Read more about the differences in the two designs here. The stories of Fraser’s Buffalo Nickel obverse and reverse are shrouded in mystery. When discussing the portrait that appears on the face of the coin, Fraser himself would often credit different Native American figures as his muses, causing confusion and creating an air of tension around the coin. Over time, some individuals stepped forward to personally claim credit for the design inspiration, although none were ever widely accepted as Fraser’s true models. While the facts remain unclear to this day, two well-known Native American figures – Iron Tail and Two Moons – seem to be most commonly noted over time. Similarly, the inspiration for Fraser’s reverse has also been a source of confusion over the years. The designer himself stated that he modeled his reverse bison after the living Black Diamond buffalo, although these claims were called into question when the designer further noted that he sketched the animal at the Bronx Zoo. Records indicate that Black Diamond was never housed at the Bronx Zoo, but instead, lived at the Central Park Zoo until 1915, the year he was sold. Further skepticism surrounding Fraser's bison developed when experts pointed out that the design depicted the bison's horns in a different spot on the animal's head than they appeared in actuality. Nevertheless, Fraser’s design legacy was revitalized and lives on to this day by way of the Gold American Buffalo coin. Additionally, the Gold American Buffalo of the 21st century has enjoyed immense popularity since its initial release, thanks in part to periodically enforced limited mintage figures and its title as the U.S. Mint’s first 24-karat gold coin produced for the public. This high-demand coupled with the impressive growth in gold prices since the coin’s release has so far allowed the Gold Buffalo to enjoy substantial value since it was originally minted. In addition to this year’s Proof coin release, there are a variety of opportunities to invest in Buffalo coins. Not only does the Mint produce an annual bullion version of the coin in addition to its proofs, but there have also been several special issues of the Gold Buffalo over the years. In 2008, the Mint released fractional denominations of the Buffalo, while in 2013, a special Reverse Proof version was issued to celebrate the design’s 100th anniversary. Investors can even expand their Buffalo portfolios beyond gold with a one-ounce copper round bearing the famed design. The United States Gold Bureau is also proud to offer a variety of Gold Buffalo sets and date runs to fit our clients’ unique investment needs! Ready to get your hands on this American treasure? Give our team of Precious Metals Experts a call today at (800) 775-3504 and stay tuned for more news on the 2019 Gold American Buffalo Proof issues soon!
Posted in: Gold
Did you like this post?
0
0
Search The Blog
Categories
Recent Posts