History of the Gold American Buffalo 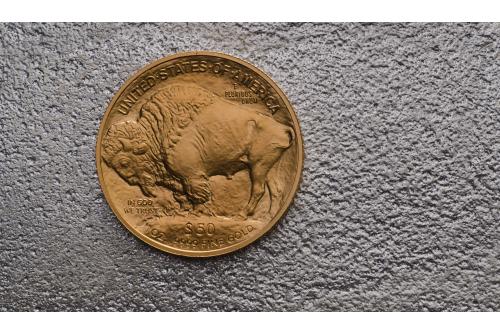 History of the Gold American Buffalo

The Gold American Buffalo has been a highly sought after commodity since 2006. Collectors and investors everywhere are captivated by the Gold American Buffalo’s beauty and value, but some may not know the rich history behind it. Its history spans over a century and it has shaped the appeal of the coin many seek to have today.

In 2005, the Presidential $1 Coin Act was passed, requiring the production of a one-ounce, 24-karat gold bullion coin with a face value of $50. The U.S. Mint decided to produce the Gold American Buffalo, designed after the Buffalo nickel of the 20th century, and it became the first .9999 24-karat gold coin produced by the United States that was available to the public and had a mintage limit of 300,000 coins. The Gold American Buffalo was created to compete with foreign coins available in 99.99% pure gold that was dominating the bullion market. The Gold American Eagle was only 91.67% gold, and people were turning to other, more pure alternatives. As soon as the Gold American Buffalo was issued, the attention of collectors and investors was focused back on the United States. Due to the combination of its instant popularity and how much the price of gold has increased in the past decade, the coin’s value has increased dramatically in a very short amount of time. And with every passing year, the Gold American Buffalo only gets more popular.

The Man Who Started it All

The Gold American Buffalo was modeled after the 20th century Buffalo nickel, originally designed by James Earle Fraser. In 1911, the Taft Administration commissioned the beautification of various coin denominations. The five cent piece was specifically chosen to be redesigned in order to replace the preexisting Liberty Head coin. Fraser, a noted sculptor at that time, was selected as the artist to design the composite. He had always been interested in Native American culture and ritual and that’s where he derived much of his inspiration. The administration was impressed by his Native American and buffalo design and decided to use them for the observe and reserve of the new coin. The Buffalo nickel, also known as the Indian Head nickel, was approved in 1912 and despite several months of delay due to objections over the coin, it was issued in 1913.

The Case of the Unknown Native American

Even though the coin’s obverse shows a face many people recognize, there has been a lot of controversy surrounding the identity of the model of the original 1911 composite. The design is said to be inspired by several different Native American figures and does not draw on any particular characteristics. The specific identity of the figures have never been clear - Fraser himself would name different individuals he allegedly used for the composite when he was asked over the near half-century between its creation and his death. The most commonly mentioned Native Americans were Iron Tail and Two Moons, two well-known Native American figures during the early 20th century. There have been others who claimed to have been used for the composite, including Two Guns White Calf, son of the last Chief of the Blackfoot Native Americans, and John Big Tree, the self-proclaimed “nickel Indian”. The U.S. Mint, however, have disputed the claims of there being any confirmed composite model. So, unfortunately, the true identities of the Native Americans used will most likely never be known.

Was the Bison Real After All?

The reverse of the coin, the famous buffalo that gives the coin its name, comes with its own controversy. It all centers around Fraser’s account of the buffalo model and whether or not it is to be trusted. Unlike the obverse, Fraser claimed to have a direct model for this composite, American bison Black Diamond. According to the artist, however, the bison wasn’t particularly cooperative. Fraser was known to say, “[Black Diamond] refused point blank to permit me to get side views of him, and stubbornly showed his front face most of the time.” The interesting thing about Fraser’s account is that it doesn’t necessarily add up, calling into question if Black Diamond was used as the model for the coin at all. There are some interesting discrepancies. Fraser claimed to have drawn Black Diamond at the Bronx Zoo where the bison was housed, but it’s on record that the bison was never located there. Instead, he was located at the Central Park Zoo until he was sold in 1915. Another difference was the placement of bison’s horns on the coin. They were in a completely different location in the final design than Black Diamond’s actual horns. This leads experts to believe that Black Diamond might not have been the model after all. There is no evidence of there being another animal used for the design, so the mystery of Fraser’s account of Black Diamond may never be solved..

After the Buffalo nickel was discontinued, the design was largely forgotten until the turn of the century when the Gold American Buffalo was minted in 2006. The coins come in both proof and bullion. The 2006 and 2007 Gold American Buffalo coins were the only coins to come in only the one-ounce denomination. From 2008 until the present, the coin comes in values of $50, $25, $10, and $5, which equates to 1 ounce, ½ of an ounce, ¼ of an ounce, and 1/10 of an ounce respectively. Every Gold American Buffalo coin, both proof, and bullion, is minted in the West Point mint in New York. The proof version has a “W” on the obverse side of the coin, right behind the neck of the unknown Native American. The obverse also features the word "LIBERTY" on the top right as well as the year of mintage on the bottom left, along with the letter "F" to commemorate James Earle Fraser. On the reverse side, the motto "E PLURIBUS UNUM" above the buffalo’s lower back and "UNITED STATES OF AMERICA" along the top. It also bears "$50 1 OZ .9999 FINE GOLD" along the bottom below the buffalo. The Gold American Buffalo is regarded as one of the most beautiful coins ever produced by the U.S. Mint. Every year when it is re-minted, it is in high demand across the world. The rich history of the coin itself makes it even more of a treasure for commodities investors and collectors alike. If you like the Gold American Buffalo, don’t hesitate to start your future in precious metals. Check out our extensive inventory on our website today! Sources: http://www.acoincollection.com/history-of-the-buffalo-nickel-indian-head-nickel/ http://www.lukebauserman.com/theweeklyholler/story-buffalo-nickel/
Posted in: Investing , Gold
Did you like this post?
0
0
Search The Blog
Categories
Recent Posts