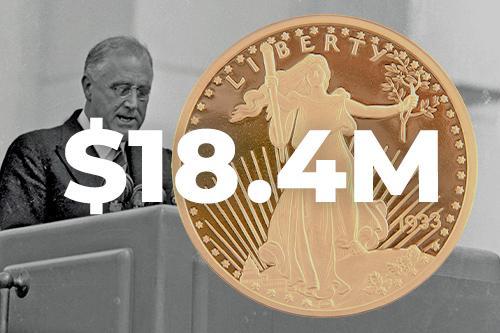 A gold coin from the U.S. Mint just broke the record for the most expensive coin ever sold when it sold at auction for $18.4 million.

The 1933 Double Eagle gold has a face value of $20 and sold at a Sotheby's auction held in New York City.

This same coin had previously sold at a 2002 Sotheby’s auction for $7.6 million. According to our blog of top expensive coins, the only other coin that has valued more was the Flowing Hair Silver/Copper Dollar, which went for $10 million.

What Makes the 1933 Double Eagle so Special?

For starters, this coin was illegal to own after its production. In 1933, the U.S. was in the trenches of the Great Depression. President Franklin D. Roosevelt’s focus during that time period was to boost the economy and lift the country out of its depressed financial status. Days were becoming desperate. So, President Roosevelt signed Executive Order 6102, created to persuade and require all persons to deliver their gold to the Federal Reserve System on or before May 1, 1933. The executive order stated that all gold coins, gold bullion, and gold certificates were to be surrendered to the Federal Reserve in exchange for $20.67 per troy ounce. Only gold coins with numismatic value and gold used in manufacturing, dentistry, and jewelry were exempted from the order. Also, each person in a household could retain up to five troy ounces of gold bullion coins.

According to the BBC, as a result of this confiscation, the 1933 Gold Double Eagle was the last circulated coin that was minted in gold, which was 90% gold and 10% copper alloy. Most of the coins that were confiscated were destroyed and declared illegal to own, with the exception of this U.S. Double Eagle that was sold for $18.4 million.

Ownership History May Have a Role

This specific coin has a unique ownership history. It was once owned by the “King of Bling,” King Farouk of Egypt from 1944 until 2002 when it was sold by a private owner.

There are commonly three value factors that are considered when a coin is valued. They are coin grade, coin history, and coin rarity. In the case of the 1933 Double Eagle coin, all three value factors collided together and increased the value of the coin significantly. So far in history, this is the most valuable coin that has ever been reported.