Top 3 Investment Grade Coins for the End of 2020 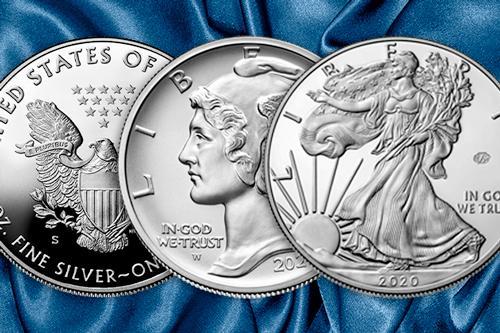 Top 3 Investment Grade Coins for the End of 2020

With autumn officially upon us and the U.S. Mint’s release schedule seemingly back up and running (at least in part), we thought now would be a great time to explore some of the most exciting coin releases coming up in the last few months of 2020.

Released from the U.S. Mint on September 24th, the 2020 installment of the Mint’s Palladium American Eagle series. The coin has a mintage limit of 10,000 coins, a product limit of the same amount, and an order limit of one coin per household. Additionally, the U.S. Gold Bureau offers this unique 2020 issue in perfect MS70 condition to investors.

For the first time, the 2020 Palladium American Eagle One Ounce coin will be produced in a striking Uncirculated finish. Since its launch in 2017, the Palladium Eagle has been issued in Bullion and Proof iterations, so this year’s Uncirculated finish marks an exciting evolution in the coin’s relatively short history.

According to the U.S. Mint, “the term uncirculated refers to the special coining process used to make the coin, which gives it a brilliant finish.” Uncirculated coins are produced via the same general methodology as their circulating counterparts, save for a few additional measures to enhance the finished product's quality. Such additional measures include employing a "slightly higher coining force, early strikes from dies, special cleaning after stamping, and special packaging,” as the Mint points out.

Just like with Proof coins, Uncirculated coins can be graded and, as a result, may enjoy potentially higher long-term values based on the item’s overall quality. Coin grading is a process through which an independent industry authority like the Numismatic Guaranty Corporation (NGC) assesses a coin on a variety of quality metrics such as image clarity, the magnitude of surface blemishes, and strike quality, and issues a score based on the coin’s performance in the specified assessment areas.

NGC employs the industry-standard and internationally accepted Sheldon scale to assess coins and issue grades. The Sheldon scale – a 70-point numeric rubric – was developed by American psychologist and numismatist, William Herbert Sheldon, in 1949 and has been used by NGC since its founding in 1987. Coins receiving a grade of 1 on the Sheldon scale, according to NGC, retain "enough detail to identify the coin's date and type," but its rims are “nearly flat.” On the opposite end of the spectrum are perfect-score 70 coins, which NGC notes have “no post-production imperfections at 5x magnification.”

Like their Proof counterparts, coins that the U.S. Mint calls “Uncirculated” are assessed on the Sheldon grading scale, with 70 being the highest possible grade. Coins of this type that score at least 60 receive the label “Mint State,” with the highest grade being abbreviated as “MS70.”

The United States Gold Bureau is proud to offer our clients an assortment of Proof and Mint State coins made up almost entirely of perfect-score 70-grade coins. Clients will have the opportunity to invest in one of these unique 2020 Palladium Eagle Uncirculated coins through our team of Precious Metals Experts later this fall. Keep an eye on our website for more announcements or sign up to activate notifications to get news and updates delivered directly to your inbox!

Up next in our end-of-year roundup is the fan-favorite American Eagle Silver Proof S-Mint coin. Lauded and loved for its iconic "S" mintmark, the Silver American Eagle Proof's late-year installment is feverishly anticipated year after year by investors and numismatists alike.

While most of the series's annual issues now come from the New York-based West Point Mint, the allure of the beloved "S Mint" Silver Eagles has yet to dissipate. In 2012, the Mint reintroduced the Silver S Mint Eagle in a limited-run reboot to meet seemingly relentless demand for the beloved coin. This 2012 special issue was offered exclusively as part of a commemorative set that befittingly celebrated the 75th anniversary of the San Francisco Mint’s current location.

When it became clear that even this 2012 reboot wouldn’t quench the undying thirst of “S Mint” enthusiasts, the Mint decided to release two more limited-run special issues of the coin in 2017 – one as part of its annual “Congratulations Set” and the other as part of its 2017 Limited Edition Silver Proof Set.

Still not enough for the coin’s loyal fans, the coin was released yet again in 2019, this round as a stand-alone item for the first time since 1992.

Back again for 2020, the Silver American Eagle Proof S-Mint coin is currently set to be released by the U.S. Mint on October 13th at noon Eastern Time. This year, the coin will have no mintage, product, or household order limits.

While the 2020 Silver S Mint Eagle's design and specifications are the same as in years past, given the Mint’s intermittent product releases and general frenetic nature of national and global markets this year, demand for 2020 Silver S Mint Proofs could be even higher than usual.

2020 Silver American Eagle Proofs purchased through the U.S. Gold Bureau will be graded by NGC and be accompanied by a certification label signed by former Director of the U.S. Mint, Ed Moy.

Investing in coins like the 2020 Silver American Eagle Proof through the U.S. Gold Bureau provides clients the opportunity to capitalize on some of the most unique value-adds on the investment coin market today. Features like the Ed Moy-signed labels are offered exclusively to U.S. Gold Bureau clients and have proven to be lucrative features for investment-grade coins over the years. Working with our team to enhance your asset portfolio saves you the time and effort of navigating the vast precious metals information landscape on your own and alleviates the burden of seeking out value-enhancing features like NGC coin grading yourself.

Rounding out our list of the top three coin releases for the end of 2020 is the historically significant special-issue American Eagle Silver Proof coin commemorating the 75th anniversary of the end of World War II.

This beautiful Proof coin is a meaningful way to honor the service and sacrifice made by all men and women of the world during one of the most tumultuous periods in human history. The 2020 End of World War II 75th Anniversary American Eagle Siler Proof Coin features the standard American Eagle obverse and reverse designs, in addition to featuring a unique "privy mark" on its obverse to, according to the Mint, “symbolize the 75th anniversary of the triumph of World War II." The privy mark appears as "V75" encircled by the Rainbow Pool's aerial-view shape in Washington D.C.'s West Potomac Park. The Rainbow Pool has become an integral part of our capital's World War II Memorial and has established a reputation as a site that prompts “somber reflection, appreciation, reverence, and hope for the thousands who visit each year.”

As the Mint notes in this post, a privy mark is generally a symbol used on coins to convey its production details. Throughout history, countries have employed privy marks to identify the mint or moneyer responsible for a given coin’s production, the artist who designed the coin's imagery or to communicate other aspects of the coin's origin.

In recent history, privy marks have become less practical and more commemorative or even celebratory in nature. Mints worldwide have made use of the privy mark in the not-so-distant past to honor significant national, cultural, or historical events or other marketing purposes, which is a trend that holds to today.

One practical aspect that has endured, however, are mintmarks, although with some changes. Today, many Mints are identified by an associated alphabetical mintmark (such as the U.S.-specific "W," "P" or "S" mintmarks). In the past, many Mints were identified by pictorial privy marks.

This year, the U.S. Mint is honoring the end of the incredible human experience that was World War II by including the special “V75” privy mark on select commemorative coins. The 2020 special issue Silver American Eagle Proof End of World War II 75th Anniversary boasting the commemorative mark is a stunning display of reverence, honor, and reflection for one of the most significant and impactful events the world has ever experienced.

While 2020 has been nothing short of unpredictable, our team is enthusiastically looking forward to what the Mint has in store for the rest of the year. If you are interested in adding one of the above investment pieces to your asset portfolio or would like to learn more about ways to invest in precious metals, we encourage you to give our team of Precious Metals Experts a call today (800-775-3504).