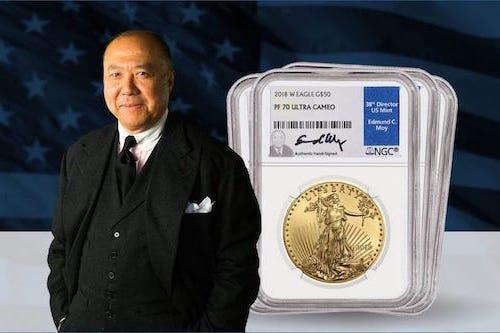 The American Eagle Coin Program is arguably the most notable and revered series of precious metals pieces offered by the United States Mint today. The program kicked off in 1986 with the release of both gold and silver bullion and proof iterations of the newly conceived American Eagle investment coin.

The American Eagle program was expanded in 1997 to include platinum issues, and again, 20 years later in 2017, to include palladium issues. In each of the four metal variants, American Eagles are the official bullion and investment coins of the United States. They are, year after year, highly sought-after precious metals pieces the world over.

With this suite of coins boasting such a legacy of reverence and historical appeal, it's likely not a surprise that gathering a list of the Top 5 American Eagle Proof coins ever struck would be no easy feat. The program has more than 30 years’ worth of releases under its belt, providing an array of options for any investor to choose from in his or her quest to constructing a complete precious metals portfolio.

That being said, the American Eagle Proofs outlined below are particularly exceptional investment pieces that made it onto our Top 5 list for a variety of reasons, from low mintage figures to being the inaugural issue in a new overall series or a new limited design run to other defining features such as production location.

Additionally, each coin in our Top 5 American Eagle Proof list is offered through the United States Gold Bureau with a grade of PF70 – the Ed Moy certification labels, which are available exclusively to the U.S. Gold Bureau clients, have proven to be lucrative and highly sought-after value-adds, providing investors with unique opportunities to add a historical and diverse edge to their asset holdings with proof coins bearing the labels.

Read on for the United States Gold Bureau’s picks for the Top 5 American Eagle Proof coins produced to date.

More than 30 years after the inaugural gold and silver issues of the American Eagle coin program were released, the U.S. Mint further expanded its already world-renowned suite of bullion and investment-grade Eagle coins in 2017 to include the fourth of the primary investment metals: palladium. The bullion version of the newly established Palladium American Eagle was released in 2017, while the investment-grade proof version was launched the following year in 2018.

Being the first in a series is a particularly appealing characteristic of any coin, which is why the first ever 2018 Palladium American Eagle Proof has snagged the number-five spot on our list.

This one-ounce palladium beauty is made of 99.95% fine palladium and carries a legal tender, although essentially nominal, face value of $25. The coin bears the "W" mintmark, which is indicative of its production at the West Point Mint in the state of New York.

As the U.S. Mint notes, the 2018 Palladium American Eagle Proof bears a “high-relief likeness of ‘Winged Liberty’” on its obverse, a design that was originally struck on the U.S. dime from 1916 until 1945. The early 20th-century motif, designed by notable German-born American sculptor Adolph A. Weinman, features a profile bust of a youthful Lady Liberty donning a Phrygian – or “Liberty cap” – with short, feathered wings on either side. Shortly after the dime’s release, the image of Liberty in this winged cap was mistakenly associated with the Roman messenger to the gods known as Mercury, who was often also depicted wearing a head covering that was similarly flanked with wings on either side, although his was more likely a helmet than a cap. This mis-association quickly led to the Weinman-designed 10-cent coin being dubbed the “Mercury Dime,” a misnomer that persists to this day.

The 2018 Palladium Eagle Proof’s reverse shows a striking image of an American eagle perched atop a rock, seemingly working to pluck a twig from a larger olive tree branch. The reverse motif was also designed by Adolph A. Weinman, this time for the 1907 American Institute of Architects (AIA) Gold Medal’s reverse image. As the Mint explains, it was “able to use the original reverse plaster of the AIA gold medal" to strike the 2018 Palladium Eagle Proof, marking the first time this Weinman design has appeared on a U.S. coin.

Next up on our Top 5 list is the 2018 Platinum American Eagle Proof coin. Also a “first” in a series, this 2018 platinum proof marks the initial installment of the platinum coin program’s three-year Preamble to the Declaration of Independence series.

The Preamble series, which ran from 2018 through 2020 and featured a novel obverse design and common reverse design each year of its duration, aimed to honor the three “unalienable Rights” guaranteed by the United States Declaration of Independence: Life, Liberty, and Happiness. Artistic Infusion Program Designer Justin Kunz created all three obverse designs.

To kick off the design series, the 2018 Platinum American Eagle Proof epitomizes the first unalienable right of “Life” by featuring an image of a young Lady Liberty “teaching a small child to sow seeds in a field,” as the Mint describes. Liberty watches proudly as her young pupil, whom she holds on her hip, sprinkles seeds onto the tilled ground beneath them. The two are shown in the foreground of a larger backdrop depicting sprawling American farmland that stretches toward a majestic mountain range in the distance. Also included in the scene is the image of a mighty tree, a popular motif in American symbology, which shades the Earth beneath it, suggesting “the need” for Americans to be “good stewards of an environment that sustains life.”

The reverse of the 2018 Platinum Eagle Proof bears the same design as the two other coins in the Preamble series. The image, created by designer Patricia Lucas-Morris, also of the Artistic Infusion Program, depicts a dynamic American bald eagle seemingly descending toward Earth as it clasps an olive branch in its talons. Surrounding the eagle image are the words "UNITED STATES OF AMERICA" along the coin's top rim, the coin’s $100 face value, “1oz.” weight, and “.9995 PLATINUM” precious metal contents. The artist’s initials, “PLM,” also appear on the coin’s reverse.

In 1995, to commemorate the 10th anniversary of its American Eagle coin program, the U.S. Mint assembled and released a five-coin set that included Gold American Eagle Proof coins in all four of that program’s denominations – one-tenth ounce, one-fourth ounce, one-half ounce, and one full ounce – plus a “complimentary” one-ounce Silver American Eagle Proof. All five coins included in the 10th-anniversary set were struck at the West Point Mint, making the Silver Eagle Proof that was included incredibly unique, since all of that coin's regular production at the time was taking place at the Philadelphia Mint, where it had been struck since 1993.

The U.S. Mint released the American Eagle anniversary set for $999, and customers simply had to indicate on their order whether or not they also would have liked to receive the “bonus” 1995-W Silver Eagle Proof. Either way, the price of the set remained the same.

This gold beauty is truly in a league of its own. Not only is it the coin that "started it all" by being the first gold proof ever issued under the now-robust Gold American Eagle Proof program, but it also harkens to the proverbial “glory days” of American coin design by boasting a replica of what many deem the most beautiful coin image in U.S. history – Augustus Saint-Gaudens’s Double Eagle motif.

The design, which was struck on pre-1933 U.S. “double eagle” coins, features a striking image of Lady Liberty seemingly lighting the way to freedom as she strides forward, hoisting a flaming torch in her right hand and an olive branch in her left. Saint-Gaudens’s double eagle depiction of Liberty is particularly dynamic, as evidenced by her long, flowing hair – a break in style from a history of Liberty shown with her hair pinned back and off her neck – and billowing frock as she marches ahead. Liberty is set against the backdrop of a radiant sun rising above the U.S. Capitol building, purportedly signifying the dawn of a new day shining upon the pillars of freedom and democracy this great nation promises.

Pursuant to the Gold Bullion Act that authorized the gold proof piece, the Gold American Eagle Proof’s reverse boasts a scene showing a family of eagles, one floating down toward the family’s nest, clasping a branch in its talons, while a mother eagle cradles a hatchling with her wing. The image, created by Miley Tucker-Frost, then working as Miley Busiek, was, , inspired by Ronal Reagan’s 1980 Republican National Convention acceptance speech that was themed around the notions of “togetherness” and “a new beginning.” This idea of collaboration to begin anew sparked Tucker-Frost’s idea to depict a nurturing family of eagles versus the lone eagle typically shown on U.S. coinage. With her design, the artist aimed to demonstrate the value of family and the importance of working together to support the well-being of current and future generations.

Adding even more intrigue to this inaugural Gold American Eagle Proof coin is that the now-familiar designs, which have been featured on the coin each year of the program’s history to date, will be changing soon. Knowing that the era of Saint-Gaudens's obverse and Tucker-Frost's (Busiek's) reverse will quickly be coming to a close heightens the appeal of the coin’s inaugural issue that featured the now 35-year-old combination of designs for the first time.

Each year, the U.S. Mint produces a population of standard “Mint State” Gold American Eagle issues, which are intended for general bullion market speculation and circulation, and a smaller number of investment-grade proof strikes that are geared toward precious metals investing. In 1986, the Gold American Eagle Proof’s first year of issue, the Mint released only a one-ounce version of the coin. The next year, one-ounce and half-ounce versions were struck, followed by one-ounce, half-ounce, quarter-ounce, and one-tenth-ounce issues produced in subsequent years.

When sold as a set and with all coins graded at the top PF70 level, this 1993 bundle boasts the lowest population figure of all the four-coin Gold American Eagle PF70 sets from other years, due precisely to the $25, half-ounce PF70's shockingly low count of only 642 coins, per NGC census February 2021.

Additionally, 1993 was the last year the three smaller denominations – half-ounce, quarter-ounce, and one-tenth-ounce – were struck at the Philadelphia Mint and, thus, bore the “P” mint mark. Since 1994, these coins have been struck at the West Point Mint, along with the largest one-ounce denomination.

The United States Mint’s American Eagle Proof program has no shortage of striking pieces that have typically been regarded as lucrative and steadfast additions to any investment portfolio. However, the coins on our Top 5 American Eagle Proof coins stand out in unique ways. They are excellent places to start for any investor beginning his or her precious metals investment journey, adding to an already established portfolio, or merely diversifying his or her long-term asset holdings.

Posted in: Investing, History, Silver, Gold, Platinum, Palladium
By United States Gold Bureau
More from this author
Did you like this post?
0
0
Search The Blog
Categories
Recent Posts