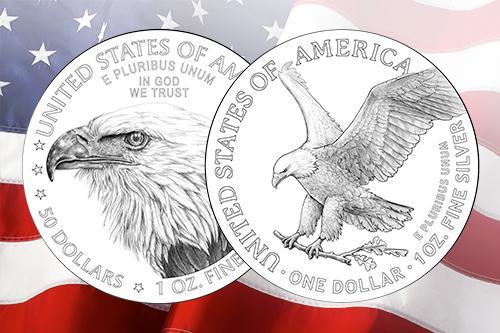 The United States Gold Bureau will offer Silver Eagle and Gold Eagle coins with updated designs starting in 2021. The current Silver Eagle design is based on Adolph A. Weinman’s famous “Walking Liberty” and the Gold Eagle is based on a traditional design created by Augustus Saint-Gaudens. Since 1986, there have been millions of Silver and Gold Eagles struck and the design change is part of the 35th anniversary of the program.

“These beautiful designs build on the United States Mint’s heritage of artistic excellence and fortify the American Eagle Coin Program’s status as an icon in the numismatic and art worlds,”said U.S Mint Director David J. Ryder.

The work of designers and medallic artists to create iconic images that represent America is no small task. The United States Gold Bureau will begin selling the coins direct to the public some time during 2021, as soon as they are released by the U.S. Mint.


The new design for the Silver Eagle captures an eagle coming for a landing with an impressive wingspan on full display. Clutched in its claws is a branch from an oak tree. The phrases "UNITED STATES OF AMERICA," "E PLURIBUS UNUM," "1 OZ. FINE SILVER," and "ONE DOLLAR" are inscribed on the coin.

“My inspiration for this design grew from a desire to show our national bird—with all of the values it embodies—in a unique way that could also convey traits such as diligence, cooperation, care, and protection,” said EmilyDamstra, the coin’s designer.

The previous design was created by John Mercanti, 12th chief engraver at the U.S. Mint, and features a spread-winged eagle, with 13 stars representing the 13 original colonies, along with the wording "UNITED STATES OF AMERICA," "1 OZ FINE SILVER,“ "ONE DOLLAR" and "E PLURIBUS UNUM."

While we normally see designs incorporating a full eagle, new Gold Eagle features a close-up and personal perspective of our nation’s official bird. The intensity of the bald eagle’s stare and the detail in the feathering around the neck is striking.

“The American Eagle is such a noble bird. I was hoping to capture the intensity of his stare through the close cropping. His gaze speaks of pride and wisdom passed down through generations of time,” said Jennie Norris, who designed the coin for the United States Mint

The retiring reverse design of the Gold American Eagle comes from the monumental sculptor Miley Tucker-Frost. It portrays a male eagle clasping an olive branch as it flies above a nest with a female eagle and two hatchlings.


The Obverse of the Gold and Silver American Eagle


Get the American Gold and Silver Eagles While They Last


What about the Ed Moy Proof Versions?


It is expected that the new designs will also eventually be used on the proof versions of each coin. The date for this release has not been determined. When it does happen, the U.S. Gold Bureau will offer coins with the new design, graded in perfect “Proof 70” condition. Like with other Proof 70 coins from the U.S. Mint, coins sold by the U.S. Gold Bureau will feature certification labels that are hand-signed by Ed Moy, former Director of the U.S. Mint.