Tax Reform and You 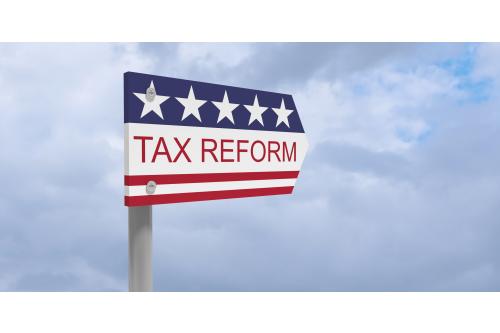 Tax Reform and You

The new tax reform act has been touted as the “largest tax cut in the history of our nation”. Perhaps for some, but for many Americans, the impact might be muted by the overall effects on the financial system. If we use the tax reform efforts of the past as any guide, then a further loss of purchasing power is looming just around the corner. Following the tax reform of 1986, the purchasing power of the American Dollar decreased by 22%. Following the tax reform changes of 2001, the value of the Dollar decreased by 37% over the next 7 years, as the graph below indicates.

Another potential headwind for the middle class, is a looming recession. Presently, GDP is poised to go above a trend line called “Potential GDP”. While that may sound like good news, in every previous case, recession followed shortly thereafter. We appear to be on the crux of that now. 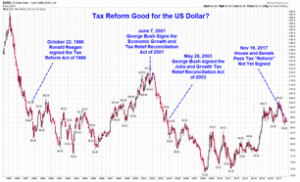 While having a few extra hundred Dollars from a tax cut might offer a short-term boost to the family budget, the longer term impact remains in doubt. The tax cut proposal expands the most generous provisions for those already enjoying the largest benefits from the current financial order of things. Since 2006, 60% of Americans have seen their real wages decline, due to the effects mentioned above. That loss of purchasing power has not been replaced by the modest tax reform efforts in the past, nor is it likely to be replaced in the future. We have discussed earlier the effects of a cheaper Dollar over time, including when the stock market is rising.

And as we mentioned above, historically the Dollar has lost value in the years following tax reform. But what about the new tax reform proposal itself; what direct impact will it likely have on the core of the US population? The answer is, it depends on who you are. Some of the most touted features may only benefit a few. The much-acclaimed capital gains tax rate benefit is skewed heavily towards the wealthy. In fact, 56% of the taxes saved by this provision go to the top 0.1% of taxpayers here in America, and most of the rest to the next 19.9%. That leaves 80% of the country impacted negatively, for 3 reasons. Firstly, the bottom 80% of the population own little if any investment property with gains that qualify for the lower tax rates. Adding insult to injury, the taxes lost due to the capital gains tax cut, will likely be made up (in part) by reducing payments to or increasing payroll taxes on that same 80% of the population.

The wealthy earn only a sliver of their income by wages, and will miss out on future payroll tax hikes. The justification for the lower tax rate on gains, is that it will allow the wealthy to reinvest back in businesses and raises for employees. The lowered corporate tax rate of 20% has also been pitched as a way to benefit the middle class. But the sad reality is that few expect new factories to be built. Most expect the tax savings achieved here to be used to buy back company stock, thereby benefiting the wealthy, but bypassing the middle class again.

The elimination of the Estate Tax has also been promoted as a benefit for all Americans, including small business and farm owners. The truth is, however, that only 0.2% of the population are affected by the Estate Tax, including 80 family farms. Those few who are affected, will realize net gains of $3,000,000 to $20,000,000, because of the elimination of this tax. Again, does not benefit the masses, only the very few. The larger deficits created (1.5 Trillion), will also have to be shouldered by the many, while the benefits accrue to the few.

One of the most unpleasant aspects of the new tax cuts, is that it actually raises taxes on nearly 14,000,000 Americans who earn between $75,000 - $200,000. You can use this calculator, to estimate how you or your family might be impacted, by either the House or Senate version of the tax reform plan. Whether you come out better or worse, for many, this is not a tax-simplifying proposal. What would be simple, is if they had us calculate our tax using existing methods, and multiply by 0.80. That would provide everyone who pays income taxes, a 20% reduction in tax. Instead, they have added 479 pages, to an already confusing tax code, and mandated that all tax cuts expire in 2025.

With the wages of most Americans being lower than they were 11 years ago, the looming inflation and dollar devaluation due to increased government debt is inevitable. To provide yourself some protection from the effects of the tax cuts, we believe it would be prudent to exchange a portion of your paper currency tax savings into something that will hold its' value, and combat inflation. Premiums and spot prices of gold and silver currently allow you to buy now at 2010 price levels. For added protection, consider the performance of some of our certified coin offerings, as shown in the graph below. Certified coins often perform well even when bullion has a pullback. 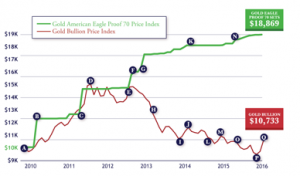 Besides the pending tax reform, there are also other changes going on in Washington, that should influence your decision to consider precious metals. The most recent choice for Fed Governor is Marvin Goodfriend, a man who believes in having a cashless society, and is in favor of negative interest rates. Due to the increasing budget deficits, and looming recession, it would be much easier to confiscate assets via inflation, if we were forced to deposit our cash in the bank, to be charged a negative interest rate. As we warned you about in October, many Americans are already earning negative rates of -2.74% on their bank accounts now, before the official negative rates become acknowledged as a matter of policy. The combination of increased budget deficits and a devalued Dollar, due to tax reform, and a Fed that would like to go cashless to enable negative interest rates, tends to make gold and silver shine like never before. When even the famed Wall Street money manager Jeffrey Gundlach is recommending gold over stocks, perhaps we would be wise to consider having a Golden Christmas.

Posted in: Investing, History, Retirement, Gold
By Bill Stack
Did you like this post?
0
0
Search The Blog
Categories
Recent Posts