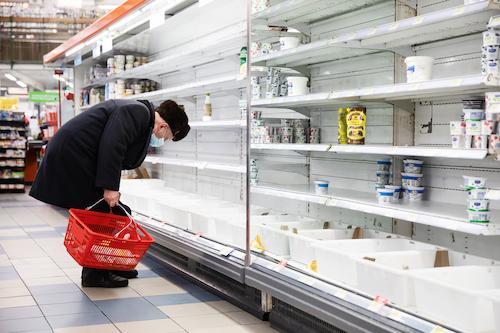 A famous quip about changing times says, “…there are decades when nothing happens, and weeks when decades happen.” We appear to be living in the latter right now, with even historically neutral nations like Switzerland taking a position in the regional conflict between Russia and Ukraine. As with most wars or international conflicts, there is also a propaganda war waged by all sides, making it difficult to ascertain the truth about what is going on. Whether the courageous residents of Snake Island were supposedly killed by the Russians when the attack began or accusations of older photos being used to describe the current conflict, manipulation of public perception is sometimes a goal of both sides. Internationally, it has also become a contest between paper assets and oil or investing in gold.

One of the most talked about financial consequences across the globe involves removing or limiting Russian access to the cross-border funding transfer system called SWIFT. The thought is that cutting off the transfer of dollars to Russia can cripple Russia’s economy and cause them to cancel the Ukraine invasion. But one of the challenges for the world is doing without the natural resources, agricultural products, and energy resources received on the other end of these transactions. Russia typically provides 8% of the world’s copper, 9% of the world’s aluminum, 12% of the world’s oil, 18% of the world’s wheat, and 19% of the world’s natural gas (see graphic). It might become as difficult for the world to do without Russian resources as it is for Russia to do without a connection to the Western SWIFT financial system.

It is yet to be seen if it has any impact on Russia or Ukraine. The impact will likely be minimal. One example is Canada, which has recently announced a “ban on the imports of Russian crude oil.” The only problem is that Canada has not imported any Russian oil for several years and probably wouldn’t anyway as an oil-exporting nation themselves. Meanwhile, many nations that import Russian oil (such as the United States) have avoided making such an announcement. That is like someone saying they are boycotting the NFL and won’t attend a game when they don’t like football and haven’t been to a game in years.

Origins of the Conflict

To understand the effects of the conflict, it is important to consider its origins. While some lay all the blame at the feet of the Russian leader, Vladimir Putin, and accuse him of “naked aggression,” there is another version to be considered. Since the end of WWII, there has been a tenuous peace between European nations and the former Soviet Union. Following the collapse of the Soviet Union, there was an agreement that NATO would not expand east, and Warsaw Pact nations would not seek to move West. As the graphic illustrates, NATO did expand east and is now on Russia’s doorstep in Ukraine. Russia sees the encroachment as a threat and has drawn a line in the sand in Ukraine. NATO used to be 1200 miles west, in West Germany. For 50+ years, there was peace in Europe when this buffer was maintained. Yours indeed was stationed there in the 1990s, in Elvis Presley’s old unit.

While most Western media extols the power of sanctions and promotes the idea of a crippled Russia forced to relent, reality might look quite different. Americans living near the front lines in Ukraine provide an alternative view of the conflict, including “Coach Red Pill,” with nearly 300,000 subscribers on YouTube. Insiders say the gravest danger for residents of Kyiv are the prisoners released and given weapons by the Ukrainian government, creating chaos and committing atrocities that are going largely unreported by Western media. They also say Russia is trying to capture Ukraine intact and is not pursuing the destruction of infrastructure. Some of these anecdotal observations also match the projections of professional geopolitical analysts currently studying both sides of the conflict. Research Fellow Franz-Stefan Gady presents evidence that suggests Russia is setting up a blockade to intercept much of the weaponry recently promised to Ukraine by various governments around the world.

What Can We Do?

The pertinent question for us today is how can we best prepare for the future outcome of this conflict - whatever it turns out to be? Those expecting Russia to fold quickly may not have considered that Russia has already taken steps to protect itself against dollar confiscation by reducing the dollars in its strategic reserves. They have increased allocations to other currencies and gold. They have also acquired new commitments to sell local and regional resources and negotiated substantial trade deals with China for natural gas and other energy production. While these deals may take time to play out, they are also getting around new sanctions by selling oil to new partners, such as India. It turns out that nations need food and energy, and Russia has both on tap.

Whether sanctions eventually work to bring Russia back to the table or not, we can expect higher prices for energy, commodities, food, and precious metals, in dollar terms. There has been an incredible amount of paper selling to bring down gold and silver prices this week and last week (described here), so far to little avail. The demand for physical metal worldwide has been ravenous, and for a good reason. Even if Russia walks away from this conflict quickly by some miracle, it appears that a new multi-polar world financial order has begun. And no matter how we slice it, gold is likely to play a central role.

For those of us here in the United States, unless we have family or friends living near the Russian border, the risks of this conflict are primarily economic. When it was recently reported that Russian nuclear forces were “on high alert,” a significant omission was always on high alert. Any nuclear power, including the United States, stays in a state of high alert when it comes to nuclear weapons. The most likely scenario we will see is an environment of higher prices at the pump, grocery store, car dealer, lumber yard, and many other places. With interest rates at historic lows here in the US, one of the safest ways to protect your future purchasing power is by owning physical precious metals.