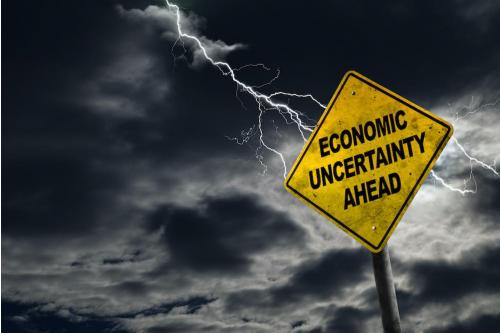 In October of 2019 we alerted our readers to the possibility of entering a recession here in the United States, sometime in 2020.  This concern has begun to be expressed by American CEO’s that have their finger on the pulse of the business climate both here and around the world.  We thought it would be a good time to revisit this discussion, and update our interpretations of the latest data, and what it all means for precious metals.

While many do not expect a recession to manifest until the fall, this concern has moved from the 3rd greatest concern in 2019, to the 1st (and greatest) concern for 2020.  Although the reasons for the concern among CEO’s vary somewhat from the concerns we raised in October, the end results are similar.   The role of CEO’s and CFO’s in predicting recession is less academic and more practical than the role played by mainstream economists.  Often professional economists only see recessions in the rear-view mirror, after the economy has already entered one.  But executives charged with steering America’s largest and most successful companies have a view from the trenches about what is going on in the marketplace.

One of the reasons for concern here in the U.S. is the trade uncertainties and turmoil happening in other regions of the world, such as Hong Kong.  While normally an important financial engine for the economies of Asia, Hong Kong has recently entered into recession itself, as a result of the protests and unrest concerning their relationship with China.  Recession also leads the concerns of executives across Europe, Latin America, and China as well.  It has become global in it’s reach and impact, and has caused many to look to precious metals as a form of insurance against financial upheaval.  Long lines can be seen in Germany, of those lining up to buy precious metals.  Recent research indicates that while the Central Bank of Germany holds 3,400 tons of Gold, German citizens hold nearly 9,000 tons of Gold, mostly in coins, bars, and jewelry.

With recent events in the Middle East causing metals to spike above our mid-range target of $1600.00 per ounce for Gold, there is plenty going on here in the United States to support a higher Gold price as enumerated here.  But what effects could these policies have on recession, and what do those effects imply for Gold in the months ahead?  It seems that we are following an established pattern following a yield-curve inversion.  There is a period when the yield-curve normalizes, followed by a rise in the stock market.  Both of these phenomena have occurred since we mentioned the inversion back in October.  Some are saying there is nothing to worry about, since it appears things are “back to normal”.  But history tells us that this is the usual set up before recession begins, and people are sometimes lulled to sleep with the idea that things are “different this time”.

It is important to note that while stocks and bonds are currently at record highs, Gold and Silver are still 20-60% below record highs in Dollar terms.  This doesn’t mean that they cannot dip below current prices, but it does mean that there is relatively less risk in owning Gold or Silver than in owning stocks currently.  Going back to the 1970’s, in periods when stock markets lost the most, Gold delivered an impressive performance 75% of the time (see graphic).  This would imply that now may be a good time to take steps to protect your financial future, and that of your family, by repositioning or rotating some assets out of the stock market and into Gold.

Even some of the most well-known money managers (such as Jeffrey Gundlach) are talking about how we are at a unique time in history that offers investors a great opportunity to take advantage of growth in metals and other commodity prices in the months ahead.  He believes the set-up has only been this good a handful of times in the last 100 years, and believes it wise to allocate some capital to this sector unfamiliar to the portfolios of many Americans.

Often times we hear from the promoters of mining company shares that owning stock in mining companies provides a way to profit more than owning precious metals directly.  Sometimes this can be true, if you own the right names and conditions are good.  But when dealing with periods of recession or general downturn in stocks, the likelihood of doing better is clearly with those who own the metals directly.  Researchers atForbes discovered this phenomenon while exploring this very issue.  With rare exception, most mining stocks can get pulled down with the vortex of a declining stock market, at the same time that Gold receives support from those seeking a safe haven.

Adding to concerns about a global downturn are recent reports of an impending default in the sovereignbonds of Argentina, which could sow chaos throughout Latin America and among many in the West.  While many Americans might have trouble pointing to Argentina on a map, some may be surprised to find that they own a portion of these bonds indirectly, via their mutual funds or retirement plan at work.  In the same way that trouble across Asia reverberated throughout emerging markets worldwide, issues in Latin America can produce similar effects.  As funds begin to rotate out of the sector looking for a safer place to land, Gold and Silver can provide a welcoming environment.

With renewed concerns about a global pandemic developing in China, the prospects for global trade and profit are battered further.  This is among the concerns shared by executives leading America’s greatest companies, and contributes to the notion that global recession may begin to impact the United States sometime in 2020 or shortly thereafter.  The time to prepare is before the damage occurs.

One of the easiest ways to protect against a market implosion or economic downturn is by owning a proven store of value.  Gold and other precious metals are a representation of the human capital it takes to mine and refine them, and a store of the value of energy/natural resources it takes to make it happen.  With declining rates of new mines coming on line, and lower production numbers coming from existing mines, all signs are pointing to future support for the metals.  The headwinds of economic turmoil being felt by CEO’s today, will likely become a tailwind for the owners of precious metals going forward.

Posted in: Investing, Silver, Gold, Platinum, Palladium
By Bill Stack
Did you like this post?
0
0
Search The Blog