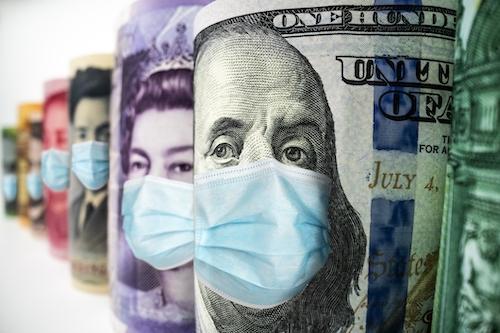 It appears that there are new or reinstated mask mandates cropping up in some cities and regions across the United States, which seem, in many cases, to apply to all people, whether vaccinated or not, and more pushes by various entities to increase vaccination rates against a virus that continues to mutate and find ways to infect people.  As the world faces more troublesome news about the continued spread of COVID-19, and whether lockdowns will happen again in your area or not, it appears they will be happening in enough parts of the world to most likely make further economic impact.  The questions then become, what economic impact is likely, and how can we prepare or respond?  Today, we will do a little sleuthing to determine what actions governments are already taking around the world, what further actions are possible, and how this might affect the owners of gold and silver.

70% Vaccinated, But Still Masked Up

The Centers for Disease Control and Prevention (CDC) announced on Monday this week that 70% of adults in the United States have received at least one vaccine injection.  The vaccines that are currently being administered in the U.S. vary in terms of how many injections are needed to achieve “full” vaccination status. The Johnson & Johnson vaccine, for example, only requires one injection for a full dosage, while the Pfizer-BioNTech and Moderna vaccines call for two separate injections.

Data indicates that even those who are fully vaccinated are still susceptible to the “delta variant” of the virus (and all variants, for that matter), both as a carrier, and as someone who can become ill when exposed.  An analysis from the CDC on a recent outbreak in Massachusetts showed that 74% of the 469 infected with COVID-19 from this outbreak incident were fully vaccinated.  Of the five people from this group requiring hospitalization, four (or 80% of the total five people) were fully vaccinated.  Thankfully, there were no deaths associated with this outbreak.  But it did prompt the CDC to update their guidance to include masks worn indoors for all people, vaccinated or unvaccinated, “in areas where COVID-19 transmission is high or substantial.”   Clearly, much is yet to be understood about the coronavirus variants and vaccine-related immunity.

Meanwhile, the effects of previous lockdowns around the world continue to be felt, with small businesses suffering worldwide.  In some nations like the United States, the government has attempted to reduce the pain of lost revenue and wages by means of various types of financial assistance.  Whether directly to small businesses or to individuals, there has been and continues to be significant amounts of dollars administered across the country.  Unlike previous financially tumultuous times like those during the Great Recession of 2008 and 2009, the assistance this time has been doled out to more than just Wall Street.  While this kind of aid is helpful in some ways, it may have also contributed (and continues to contribute) to increased price inflation.

When industry stops moving, businesses (and restaurants) close, and factories shutter, the quantity of available goods typically output by these operations decreases.  In other words, supplies are reduced.  When the government replaces the cash that individuals were projected to lose from not working, the supply of funds available to purchase the remaining goods stays the same.  Demand rising or staying the same while supplies are falling can cause prices to go up.  Sometimes the price increases are overt, and sometimes they are hidden, but they are there just the same.  An example of an overt price increase has been seen in the price of fuel.  In some places, the cost of a gallon of gasoline has risen 53% (from $1.89 to $2.89 per gallon) since the pandemic began.  In many areas of the country, the price increase for fuel has been much more substantial.

A hidden or stealth price increase is sometimes called “shrinkflation.”  For example, my wife sent me to the store yesterday to pick up some shredded cheese to go with her “famous” taco soup.  As I scanned the price, I was pleasantly surprised to see it was marked the same as it had been for the past few months.  But upon looking closer, I noticed the package was now “7 Oz” of shredded cheese, not “8 Oz.”  A couple years ago, I noticed a smaller bag with the same “8 Oz” size, as the company was merely saving money on packaging material.  But now, they are charging the same amount for 12.5% less cheese, which is a stealthy way to raise prices by 12.5%.  Dollar price for the package is the same, but there is less product in included.  This is happening across the board, in many sectors of the economy.

Most Gains for Gold & Silver Yet to Come

Thankfully for us, there is protection available in the form of precious metals.  As the attached graph indicates, gold and silver currently represent less than 1% of the assets held on balance sheets worldwide.  As bubbles begin to burst in stocks, bonds, and real estate, assets will move towards sectors not currently over-inflated, such as precious metals.  During periods of stagflation, such as the one that began in the 1970s, gold saw gains of 2382% in the aftermath.  While the current gold bull market appears to be mirroring that move, most of the gains (2/3) are still ahead of us.

What about inflation?  We are seeing some similarities to the 1940s period, in terms of debt levels and negative real interest rates.  While many claim that inflation will be “transitory” (or temporary), keep in mind that we are now 50 years into “temporarily” disconnecting the dollar from gold.  The attached graphic also illustrates that “transitory” inflation from the 1940s lasted for several quarters, paused, and then returned.  We may see similar phenomena occur this time around, with brief bouts of deflation mixed in during recessionary periods, followed by higher inflation when growth begins again.  Thankfully, gold and silver offer purchasing power protection during times of both inflation and deflation.