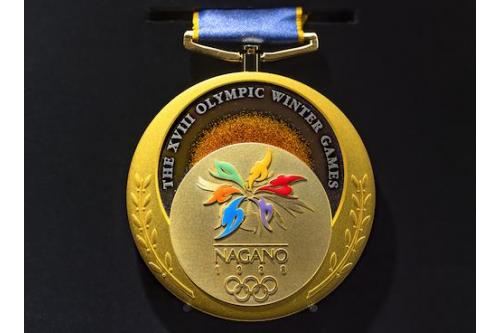 The first Olympics did not feature gold medals or any medals for that matter. Only one winner was crowned, and that was with a wreath made of wild olive leaves from a sacred tree near the temple of Zeus at Olympia. Winners at the 1896 Summer Olympics received a silver medal and the second place finishers took home a bronze medal. Solid gold medals were awarded in the 1904, 1908, and 1912 Olympics. Thanks to a shortage of gold during World War I, the practice of awarding solid gold medals ended after the 1912 Olympic Games in Stockholm, Sweden.


Are Olympic Gold Medals Made of Real Gold?


The modern Olympic Charter requires that “gold medals” must be comprised of at least 92.5 percent silver, 6.16 percent copper, leaving only 1.34 percent for actual gold. The requirement also stipulates that all medals must be at least 60mm in diameter and 3mm thick. Eight tons of gold, silver, and copper were mined for the 2012 Olympics in London. Each medal involved 22 stages of production and 10 hours to make. A gold medal at the 2012 Olympics had a precious metal value of $708. If the medal were made of solid gold, the value would be over $30 million using the current spot price of gold.


How Much are Olympic Gold Medals Worth?


There is an Olympic gold medal that may be worth even more than $1.4 million because there is an unprecedented amount of mystery and intrigue surrounding it. No other gold medal holds more history of the United States than the 1960 gold medal won by Cassius Clay (Muhammad Ali). The story, as told in his autobiography, The Greatest: My Own Story is after returning to his hometown of Louisville, Kentucky he was refused service at a local restaurant. After exiting the restaurant, he was heckled by a group of white kids. The incident angered him so much that he threw his gold medal into the Ohio River. The medal has never been seen again and likely resides at the bottom of the river.

Winners at the Olympics in Rio are not likely to become wealthy overnight from the actual value of the medal either. The approximate worth of the precious metals that constitute the gold medals awarded in Rio is only $508.42. Olympians might have to rely on the fame that sometimes follows winning Olympic gold. If not, hopefully, the wealth of the Olympic experience is enough because the medal itself isn’t worth the price of gold.