The Alarming Case of Market Contagion and its Effect on Gold 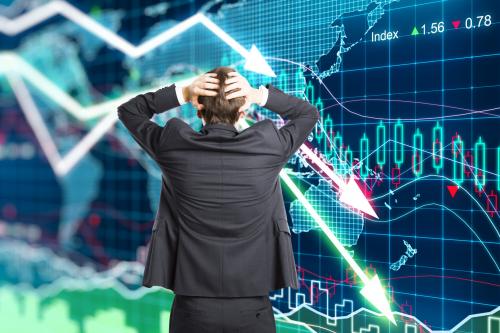 The Alarming Case of Market Contagion and its Effect on Gold

gold market news
The coming contagion is all the rage; at least the discussion of it. “The coming crash will start in the bond market.” “What begins in bonds will spread to stocks”. “Italy may drag down the Eurozone, and then the world.” These are all things you may have read in recent financial headlines, as you perused either the daily paper or the evening news. While it may seem we have heard it all before, the stakes and consequences have seldom been higher. What does all this mean to the man on the street, and what can we do about it? What happens to gold, when/if financial headlines become reality? Thankfully, we have 5,000 years of history, that offers some clues as to what we can do. When the axe is laid to the root of the tree, the leaves begin to wither. There is currently a move afoot to change how money is created in Europe, called the “Sovereign Money Initiative”. Soon, Swiss voters will be voting on whether “fractional reserve lending” will continue to allow banks to create money out of thin air when making loans. If the answer is no, then money will be created only at the rate established by the national bank. While some question how probable the proposal is to pass, others point out that the Swiss have been known to pass unlikely legislation in the past, to worldwide effect. The Swiss have long been thought of as the “bankers to the world”, and for good reason. If they are now questioning the amount of fiat currency floating around the world, perhaps the rest of us should also. Bonds are loans, diced up into small pieces, and sold to investors. Sometimes the “lenders” who purchase the bonds are pension funds, government entities, or hedge funds, but often they are individuals. Ultimately, a default on bonds affects people, no matter who or what entity is the registered owner. The current system of debt creation requires an ever-increasing quantity of fiat currency creation as well, to pay back both the principal and interest obligations of the bonds in question. If the amount of fiat currency is not increased when loans (or bonds) are created, where will the currency come from to pay off the loans? This is one of the problems faced by borrowers worldwide today. There are “developed” nations, commonly referring to such nations as the United States, Canada, Western Europe, Singapore, Australia, New Zealand, and Japan. “Developing” nations, which vary in degree of development, are nearly all other nations. Currency, loans, and investments travel the globe at the speed of the internet, looking for returns, opportunities, and a safe place to park. As we learned in 2008, the inter-connectedness of the financial system worldwide makes it possible for many around the globe to suffer when people in one region have trouble paying their mortgage. When US homeowners had trouble paying the interest on their home loans, it meant bondholders in Europe and elsewhere were going unpaid. When bonds don’t pay their stated interest, they drop in value. With interest rates in the developed world held to artificially low levels for several years after 2008, many sought to borrow money in those currencies. It was cheaper, for example, for many in the developing world to borrow US Dollars while US interest rates were 2-3%, than to borrow money in a local currency, for 9-10% interest. The key word in the last sentence is “was”. It was cheaper. It was, perhaps when the loans were made, and the bonds were sold to investors. But paying back US Dollar loans, and the bondholders behind them, require US Dollars. With interest rates rising in the US, Dollars have recently increased in value relative to the currencies of many developing nations with Dollar loans. This, in turn, makes it more expensive and difficult (in local terms) to pay back the interest and principal on the Dollar loans, and the bonds connected to them. We wrote earlier about the problems associated with many “government-backed bonds” issued in Puerto Rico, and how they are only one of several similar cases we see across the United States. Since that time, some of the bonds have recovered somewhat, temporarily worth $0.40 on the Dollar, but much is still uncertain. We know there will be further losses and pain; the uncertainty is only about who will feel it the most. The issues we are dealing with in the US pale in comparison to many of the struggles we see even throughout Europe, and the rest of the world. Whether it is German banks, Italian bonds, American bond funds, or emerging markets, there seems to be turmoil everywhere. One of the ways that certain emerging economies are protecting themselves is with Gold. Turkey is seeing their gold holdings help to counter the losses they are experiencing on their paper currency, the Lira. While the Lira is getting hammered, the gold in their portfolio helps to minimize the overall trauma. Things are so crazy right now, that some are saying it is safer to be in stocks than bonds. But when bonds are in turmoil, stocks are sure to follow. Where then can we go? Looking over the worst of the market performance of recent history, when stocks were down a cumulative 244%, gold was up more than a cumulative 63% over the same periods (see graph). With rare exception, the same Gold helping to keep Turkey and other nations afloat right now, can also help keep us afloat. If we have some, that is...
Posted in: Investing , Gold
By Bill Stack
More from this author
Did you like this post?
0
0
Search The Blog
Categories
Recent Posts