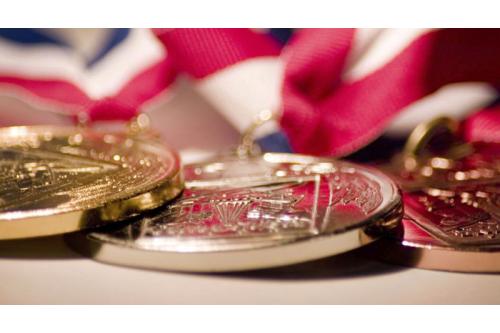 The 2012 Olympic Games in London have turned the world's attention once again to the coveted gold medal. The same holds true for the silver and bronze medals which are still admired around the world for what they symbolize.

But, what are the metals actually made of? It is interesting to note that the medals for the Olympics have not always included precious metals. Let’s first cover the beginnings of the games, and how the medals came to be.

The Olympic games trace their lineage back to Ancient Greece when winners were given not gold, but olive wreaths. It would not be until 1896 that the modern Olympic Games tradition would begin with games held every four years during the summer season. Silver medals were given at the first games in Athens, Greece as well as an olive branch. The runners up received a laurel branch and a bronze medal.


The 1904 Olympic Games in St. Louis, Missouri were the first to use actual precious medals in the popular three kinds we know today. The International Olympic Committee, commonly known as the IOC, is the body that set the standard of gold, silver and bronze medals, even going back and awarding those top three competitors in each of the 1896 and 1900 Games in 1904.

The characteristics of the Olympic medals are decided upon by the IOC and they approve the designs for each Olympics. Only the top three competitors receive the circular medals. The medals can be worn via chain or ribbon around the neck. The diameter of each medal is to be no smaller than 60 mm and must be thicker than 3 mm. Each medal must have inscribed the sport which the winner competed in. The city the games take place in is allowed to determine the design on the reverse side of the medals, but final approval must be granted from the IOC.


What Are Olympic Medals Made Of?

How Much is an Olympic Gold Medal Worth?


Olympic gold medals are worth approximately $500. The overall worth will fluctuate, as precious metals prices vary. As the price of gold goes up or down, the value of an Olympic gold medal will change with time.


How the Winter Olympic Games Differ


It should be noted that Winter Olympic games are a bit different because there is no IOC regulation on the designs that these medals can contain.

This means that more design motifs can be used, although the snowflake is common. Winter Olympic Games medals have been made of non-precious metals including sparagmite, lacquer and glass. The only exception to gold, silver and bronze medals for Summer Olympic Games took place in 2008 when Beijing was hosting the Games. At this time, jade was utilized in the medals because this represents China and its historical contribution of jade to the world markets.

The Olympic medal is sure to be a tradition for many years to come and most experts today believe that gold, silver and bronze will continue to be the commonly used precious metals for these epic awards.