Debt of the United States Government 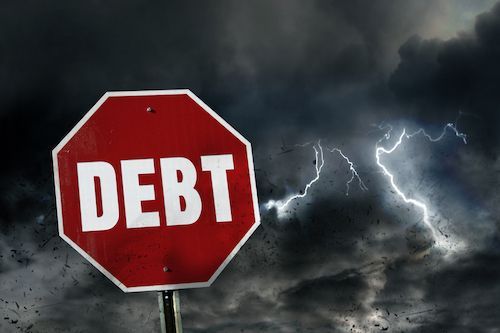 Debt of the United States Government

On Monday, April 18, 2011, in a move that surprised many but not all, S&P put the debt of the United States Government on negative credit watch.

Interestingly, after release of news that would typically be negative for government debt and the currency of the country issuing the debt (witness Greece's 20%+ interest rates), US bonds rose and stock market averages fell, including many gold stocks. To the attentive investor, Monday April 18 left important clues and a small lesson about market dynamics.

How Can the United States Government Have Negative Credit?

First, if a bond issuer is put on a negative credit watch, this is typically bad news for those bonds and typically those bonds will decline in price. Furthermore, if that issuer is a sovereign entity (i.e. a government), it often leads to investors cycling out of that currency (when they sell the bonds) and moving to the bonds of a different sovereign.

Second, in past experiences with sovereign credit issues, as currencies of those countries fell, the stocks of companies in those countries were far better long term bets than the bonds (representing the currency most directly). Two glaring examples pointed out a few months back, by Marc Faber in one of his Monthly Market Commentaries (subscription required) are Wiemar Germany and Mexico in the 1980's. In both of these instances, Faber points out that holders of equities fared far better than holders of bonds in those two time periods.

However, stocks fell on Monday when wise investors might have been considering buying stocks and certainly considering gold stocks. I took the opportunity for client accounts and nibbled on some select positions.

In the short term, the markets can be extremely irrational. Therefore do not let one day's actions drive your long term investment decisions. Gold stocks fell but by afternoon, some well-known gold stocks were up on the down day. Gold investors know that if there is a threat to the currency of a country then gold would typically rise in value in that currency.

And certainly many astute watchers feel that the US dollar has been a currency in decline for quite a while now.

If you hold to the thesis that the US, and perhaps other Western countries will continue to borrow money to try to 'stimulate' the economy, and that the central banks of these countries will continue to pursue easy monetary policy, then you know that gold and other precious metals (including silver, gold's wild cousin) offer a potentially good line of protection from inflationary debasement of your savings.

You also know now that there are many weak hands that have no solid investment thesis guiding them, and they will do things such as sell gold stocks and stocks in general, and buy government bonds when the US currency faces further downside.

In conclusion, it takes fortitude to hold your thesis when some market participants are acting irrationally. If you indeed hold the above-mentioned thesis, then do not be scared from your long term positions in precious metals because of short term indiscriminate selling.

This article was contributed by Christopher Grande, MSIM, Principal of Walnut Hill Advisors, LLC - a boutique, comprehensive financial planning firm based just outside Boston and serving clients across the country.