Bitcoin: Why Gold is Still the Best Non-Currency Currency 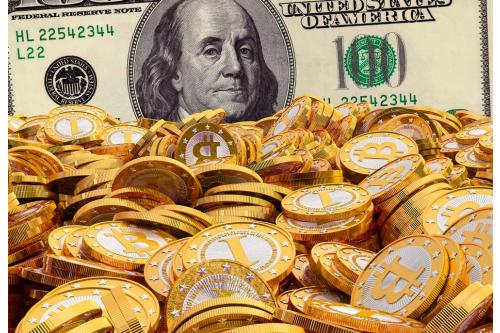 Bitcoin: Why Gold is Still the Best Non-Currency Currency

What if the best performing currency in the world had gained over 150 percent against a healthy U.S. dollar over the last 12 months? Would you be interested? What if this currency was more than a $1,000 and could overtake the price of 1oz of gold soon? Thinking about investing now? The “currency” that can boast such claims is Bitcoin. Before dismissing the notion of investing in a currency without a central authority or bank we need to understand what Bitcoin is and if an investment makes sense compared to a more traditional investment like gold or keeping your cash in the bank.

Bitcoin, according to its website is an “innovative payment network and a new kind of money.” It uses peer-to-peer technology. Instead of being controlled by a central bank, transactions and the issuing of bitcoins is controlled collectively by the network. It is open source so nobody owns or controls bitcoin. A logical question would be if nobody controls Bitcoin then what is the value based on? The simple answer is supply and demand. When demand increases the value increases and vice versa. The number of bitcoins in circulations is limited and new bitcoins are created at a decreasing but predictable rate. To keep the price of bitcoins stable, demand must follow this level of inflation. The bitcoin market is still small so it does not take large amounts of money to move the price up or down. Before you dismiss the value of bitcoin being based purely on supply and demand, remember that since 1971 the U.S. dollar has been backed by the “full faith and credit” of the U.S. Government and not gold or silver. That same government is nearly $20 trillion in debt and runs on a deficit almost every year. Bitcoins can be acquired several different ways. They can be acquired as payment for goods and services. Bitcoins can be purchased at a bitcoin exchange, exchanged with a person near your location, or through what is termed competitive mining. Competitive mining is users solving math problems using special software and receiving bitcoins in return. Computer chips have actually been designed to solve these mathematical equations faster than traditional computers. The more miners the more secure the network becomes because miners are required to approve transactions. Once a user acquires bitcoins they can be used to make mobile payments, including international payments, safely and securely. Transactions are secured by military grade cryptography and because there is no credit card number involved nobody can impersonate another person. Bitcoin owners download the app for their mobile device and can use bitcoins at some retailers by scanning a QR code from their mobile account. For those online retailers that do not accept bitcoin, like Amazon, online companies like eGifter allows consumers to purchase digital gift cards to stores with bitcoin. Users need to purchase with caution because any transaction with bitcoin is irreversible.

The Darkside of Bitcoin

Bitcoin or another cryptocurrency could be the future but is the future now? The price of bitcoin is volatile and could, in theory, become worthless. Bitcoin itself advises that keeping savings in bitcoin is not recommended because it can decrease over short periods of time, suffering from its “young economy, novel nature, and sometimes illiquid markets.”

Imagine you have decided to put a significant amount of money and purchase bitcoins in your virtual wallet. The next day the value of bitcoin goes down to half its current value or even worse goes to zero. In August 2016, a cyber attack stole over $72 million worth of bitcoins and the value of bitcoins plummeted. This was not the first time that bitcoin had experienced a significant fluctuation literally overnight. Mike Hearn, who developed bitcoin software for five years believed in January 2016 that bitcoin was “on the verge of a technical collapse,” and “no longer much reason to think bitcoin can actually be better than the existing financial system.” That would never happen with the U.S. dollar because its backed by the government and the dollar or stock market is the best place to store money and protect wealth.

The French philosopher, Voltaire, believed “Paper money eventually returns to its intrinsic value-zero.” History has proven Voltaire to be correct. A study of 775 fiat currencies that have existed, 599 are no longer in circulation. The median lifespan of the defunct currencies was a mere fifteen years. The average life expectancy of all fiat currency is only 27 years. The British pound has been around for over 300 years but it has lost more than 99% of its value during its life span. Twenty percent of the failed currencies did so as a result of hyper-inflation. Being a dominant economic and/or military power could be the variable that allows a currency to have an extended life span. However, it does not prevent a steady loss of purchasing power of that currency over its lifetime. The loss of purchasing power in essence is just failure in slow motion.

The price of gold may fluctuate but it has never been zero. There are few precious metals, if any that have had the influence on human history as gold. The love affair with gold is as long as recorded history. Gold is almost synonymous with Egyptian mythology beginning in 3,000 B.C. Egyptians were also the first to produce a currency exchange ratio that required the appropriate ratio of gold to silver. Greeks viewed gold as a status symbol and a form of glory of the immortal gods and demigods. Gold is even mentioned in the Bible. In 1792, the United States Congress passed the Mint and Coinage Act that would essentially change the history of gold by fixing the price of gold in terms of U.S. dollars. Gold and silver coins became legal tender in the United States.

There are several advantages that gold has over a fiat currency like the U.S. dollar, and cryptocurrencies like bitcoin. Gold is scarce and difficult to extract. Only about 2,000 tons are mined each year. In contrast the United States produces 10,500 tons of steel every hour. Gold is an excellent conductor of electricity. It is also the most malleable metal on Earth. An ounce of gold can form a wire 50 miles long.  Gold is aesthetically pleasing. The color and luster of gold has captivated humans for centuries. Finally, gold has been viewed since the beginning of time as a good tool for wealth storage. For the reasons above it is difficult to imagine gold ever being worthless. A reality that is not so far-fetched for cryptocurrencies like bitcoin. Although it has not happened in the history of the United States, the dollar is more likely than gold to become worthless. After all, it only took $4.26 in 1915 to buy the same amount of goods that $100 would buy in 2015. An ounce of gold during the same time period went from $20.67 to $1,060.
January 5, 2017
Did you like this post?
0
0
Search The Blog
Categories
Recent Posts