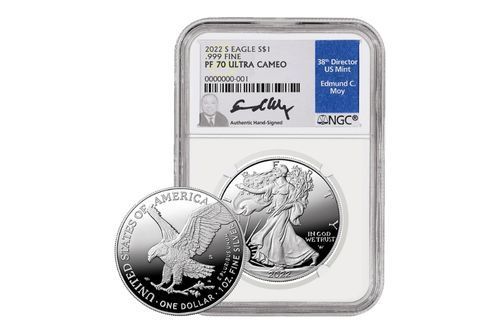 Good News! The opportunity investors have been waiting for all year, the 2022 Silver American Eagle PF70 S-Mint Coin are now available.

The U.S. Gold Bureau is proud and excited to offer our clients the 2022 Silver American Eagle Proof 70 S-Mint Coin. With all the supply chain problems, it was uncertain if the launch would happen. The U.S. Mint canceled two other silver projects earlier in the year due to supply shortages. Investors flock to the treasured “S” Mint mark, and the coins tend to sell out quickly. The “S” stands for San Francisco but symbolizes much more than where the coin was made. It symbolizes the legacy of America’s rich and storied history.

In 1848, gold was discovered in California in a small town of about 800 people. By the end of 1849, more than 100,000 had moved to the Sacramento Valley, hoping to strike it rich. Those people became known as the 49ers. The 49ers would extract over 750,000 pounds of gold out of the California hills. Henry Wells and William Fargo (Wells and Fargo) started a business driving the discovered gold across the country via stagecoach to the U.S. Mint in Philadelphia. Robbers repeatedly attacked their stagecoaches, so Congress authorized a California branch of the U.S. Mint. The San Francisco Mint opened in 1854 and is the oldest mint mark still used.

Each 2022 Silver American Eagle PF70 S-Mint coin has been stringently graded by NGC in the perfect Proof 70. Coins are graded on the Sheldon scale, with one being extremely poor quality and 70 being museum quality perfect with zero flaws or blemishes at five times magnification. After the NGC certifies the perfection of each coin, the 38th Mint Director, Ed Moy, hand-signs each label exclusively for the clients of the U.S. Gold Bureau.

Rarity drives value. The mintage limit on the 2022 Silver American Eagle S-Mint is a limited and a firm 200,000. With the silver shortage, the Mint may not produce 200,000, but 200,000 is the most to be made. Compare that with the nearly 500,000 West Point-produced Silver American Eagles this year, which have already seen a 9% price growth in just a few months.

Investors and collectors move fast when the Mint produces the famous "S" mint mark. Many people like to buy multiples to have some for themselves and something unique to give to kids and grandchildren. The 2022 Silver American Eagle PF70 S-Mint Coin is an excellent opportunity for 2022, the silver lining on the dark clouds of the economy.