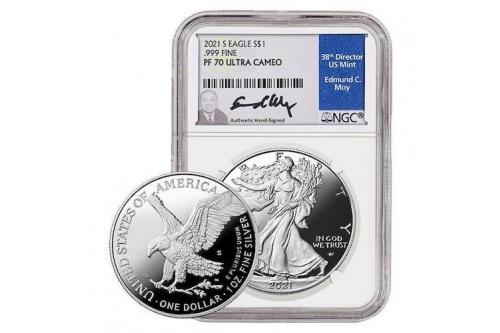 After a relatively slow start to the summer, thanks, on the one hand, to processes and protocols still emerging from full-on pandemic mode, and, on the other hand, grappling with technological obstacles that delayed sales and disrupted its product schedule, the United States Mint has now picked up the pace of its 2021 coin releases. On the heels of closing out the launch of its five-coin slate of modern-day Morgan Dollar coins, in addition to the simultaneous release of its 2021 Peace Dollar, the Mint released 2021 Silver American Eagle Proof S-Mint coin beginning Thursday, August 12, 2021, at noon Eastern Time. Now, the United States Gold Bureau is proud to offer the 2021 S-Mint in perfect Proof 70 condition.

The Silver American Eagle coin program began its tenure in 1986 after Congress authorized the series via the "Liberty Coin Act.” Passed into law in July of 1985, the Liberty Coin Act dictates specifications for the then-newly authorized Silver Eagle strikes, such as weight, metal contents, and design features. According to the law, Silver American Eagles must weigh 31.103 grams and contain .999 fine silver, in addition to featuring a design on its obverse that is “symbolic of Liberty” and an eagle on its reverse.

Earlier this year, the famed and much beloved Silver American Eagle (along with its gold counterpart) was released for the first time with a brand-new reverse design, in addition to an “enhanced” obverse design, as the Mint describes it.

The Silver American Eagle’s new reverse motif was created by United States Mint Artistic Infusion Program Designer Emily Damstra and was sculpted by retired Mint Medallic Artist Michael Gaudioso. Damstra’s reverse features a dynamic American eagle that appears to be coming in for a landing while carrying an oak branch, presumably to add to its family’s nest below. The bird is depicted in strikingly nuanced detail, adding to this new design's impact on the viewer. The image includes the typical reverse-side inscriptions for the Silver Eagle, with “UNITED STATES OF AMERICA” lining the left edge of the coin and the coin’s “ONE DOLLAR” face value and “1 OZ. FINE SILVER” contents lining the right. The motto found of the Great Seal of the United States – “E PLURIBUS UNUM,” which means, “Out of many, one” – lines the inner right edge of the coin, while the “S” mint mark, indicating production at the San Francisco Mint, the designer’s initials, “ESD,” and the sculptor’s initials, “MG,” form triangular points around the bottom half of the eagle.

The obverse side of the coin features an updated iteration of Adolph A. Weinman’s classic early 20th-century Walking Liberty design, which has graced the “heads side” of the Silver American Eagle since its launch in 1986. As the Mint notes, its team leveraged "technological advancements in the design and minting process" that enabled the obverse imagery to now encompass "some of Weinman's original details that were not previously possible.” Additionally, this technology also allowed for the “traditional artist mark,” which appears as an intertwined “AW,” to now be included on the obverse.  Weinman’s Walking Liberty motif sets a glorious scene that exudes elegance, grace, and pride. Lady Liberty is shown striding confidently forward, stretching her right arm out toward a brilliantly beaming sun rising over the horizon. She cradles a bundle of laurel and oak branches in her left arm as a billowing American flag wraps around her shoulders. The standard inscriptions also appear on this front side of the coin: the nation's official motto, “IN GOD WE TRUST,” Weinman’s artist mark, the coin’s strike year, and the word “LIBERTY,” which is spaced out in large, all-caps letters along the top edge of the coin.

If you’d like to learn more about the history of the Silver American Eagle program, we encourage you to visit our online Education resources and our recent July 2021 write-up announcing the launch of the first newly designed Silver Eagle. We also rounded up our team’s top 5 favorite Silver American Eagle releases (chosen from issues that had been released up to that point) earlier this year, which dives into the nuances and history of some of the most esteemed Silver Eagles to have hit the market in the program’s now 35-year run.

Clients of the United States Gold Bureau will have the opportunity to invest in the 2021 Silver American Eagle Proof S-Mint issue later this fall. Investment coins purchased through the U.S. Gold Bureau stand apart from those purchased directly from the U.S. Mint since U.S. Gold Bureau coins are delivered with a quality score, known as a “grade,” already attributed, while those purchased directly from the U.S. Mint are not. Proof and other investment-grade coins accompanied by (and stay true to) a relatively high grade, as deemed by third-party industry authorities like the Numismatic Guaranty Corporation (NGC), have been known to increase in value over the long term. Proof coins are graded on what's known as the Sheldon scale, which uses various metrics to assess the overall quality of the piece. Such metrics include the extent of abrasions or marks on the coin’s surfaces, severity (or lack) of visible wear and tear, clarity of the coin’s design elements, legibility of inscriptions on either side of the coin, and other such points. The Sheldon scale establishes numeric grades ranging from 1 on the low end – indicating a coin of inferior quality – to 70 on the high end – indicating a coin of excellent quality.

In our effort to provide the best service to our clients, the U.S. Gold Bureau handles the grading process of proof and other investment coins with NGC directly before offering them to our clients for investment. Doing so eliminates the burden on individual investors to have their precious metals pieces assessed on their own time and dime.

The Legacy of the San Francisco Mint

The San Francisco Mint is an official branch of the United States Mint that boasts a storied history and an affinity from the general public that has grown to nearly cult-like levels today. As the U.S. Mint notes on its website, its San Francisco outpost "produces some of the United States Mint's most beloved collectors' pieces, including commemorative coins and clad and silver proof coin sets."

The San Francisco Mint opened in 1854 after Congress approved establishing a California branch of the U.S. Mint at large nearly two years earlier. The Secretary of the U.S. Treasury chose San Francisco as home to the newly established West Coast Mint outpost, which would be a prime location to provide service to the hordes of miners operating in the area during the California Gold Rush. Over the course of its first year of operation, the San Francisco Mint produced more than $4 million worth of gold coins!

The San Francisco Mint quickly outgrew its first building, moving to a second location in 1874. This second building was a newly constructed Greek Revival-style facility designed by Alfred B. Mullett that would come to be known affectionately as “The Granite Lady,” as well as “the Old Mint.” In 1906, a devastating earthquake struck San Francisco, leaving the city’s Mint branch the only financial institution that was immediately able to resume operations after the disaster, despite also enduring a fire that broke out on the heels of the earthquake’s tremors. As such, the facility became the treasury for disaster relief funds and performed other emergency banking services in the wake of the devastation.

The “Granite Lady” or “Old Mint” building was designated a National Historic Landmark in 1961 and a California Historical Landmark in 1974.

The San Francisco Mint continued operations in its second home until 1937, when it moved to a third building – where it still operates today. Nearly twenty years later, in 1955, production of circulating coinage was suspended from the San Francisco facility, seven years before Congress would change the facility’s status from a “Mint” branch into an assay office. In 1965, another Coinage Act was passed that allowed the now San Francisco Assay Office to resume coin production. As a result, the facility began striking pennies in September of that year. In 1968, the San Francisco facility, which, at the time, was still designated an assay office, took on all the proof coin production that was then being carried out at the Philadelphia Mint. The West Coast operation continued to produce supplemental quantities of circulating coins through 1974. Since 1975, the facility in San Francisco has almost exclusively minted proof coins, except for the Susan B. Anthony dollar piece, produced from 1979 until 1981, a portion of U.S. pennies in the early 1980s, and the America the Beautiful quarter circulation strikes.

In 1988, the San Francisco facility regained its status as an official branch of the United States Mint, a title it still enjoys today.

The Silver American Eagle Proof S-Mint coin is a fan favorite every year. With the 2021 issue representing the first S-Mint to bear the new Silver Eagle design, we wouldn’t be surprised if this coin goes on to enjoy impressive levels of demand for years to come!