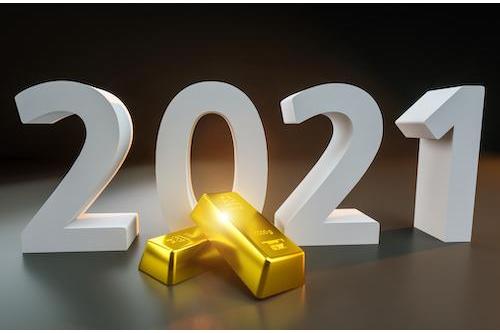 Back in December of 2020, we provided the “Precious Metals Outlook” for 2021, which has been read over 5,000 times in the past five months.  The year is not yet over, but today, we will revisit some of those projections and update them where necessary. We will begin by discussing general trends that were projected to take shape in 2021 and compare those forecasts to patterns seen so far this year.  Then, we will discuss metals price projections in detail and try to identify emerging trends to update performance numbers for the rest of 2021 and beyond.

One of the things we spoke about in the 2021 metals outlook published in December was a likely new bull market for commodities beginning in 2021.  As you can tell from the chart, commodities are up nearly 26% so far in 2021.  This increase is leading to further price inflation, which we also mentioned was likely to continue in 2021.  We are still expecting a drawdown in the stock market this year, which we may be on the verge of right now.  A market downturn sometimes will pull down gold and silver, at least initially, as people sell precious metals to find cash to operate on or repay margin debts called in on an over-leveraged stock market.  Stocks bought on margin are currently at record levels and ripe for a fall.  After the initial downward vortex in such cases, gold and silver typically recover more quickly than other sectors, as investors often turn to hard metal assets for financial safety and opportunities to hedge against inflation.

We also mentioned a likely increase in taxation, if Joe Biden won the presidency.  There have been several instances already affecting average Americans of increased amounts paid in taxes because of, as well as targeted tax increases proposed for the wealthy among us.  So far, it appears that increased capital gains tax rates will put gold and silver on a more level playing field with other asset classes, and in some cases, will favor metals in terms of taxation and tax rates.

Stagflation is another possibility discussed for 2021, in which economic growth slows while the country experiences high unemployment and rising prices.  So far, we appear to be on target for such a scenario, with prices rising such that businesses are precluded from capitalizing on growth, due to labor shortages.  A debate currently rages about why there are labor shortages with so many people unemployed, but it is an issue, nonetheless.

There is some indication beginning to manifest that the rug may soon be pulled out from underneath the real estate sector, as rent and eviction moratoriums are due to expire.  The false bubble of calm might soon erupt into a massive wave of homelessness, as families try to figure out where to go next, in the event their current housing is no longer an option.  The problem of housing no longer being available to these tenants, in some cases, is due to landlords losing the properties in question because of mortgages that haven’t been met due to the prolonged inability of those landlords to collect rent.

The commercial real estate sector has already been hemorrhaging, as companies adapted to new telework options during the pandemic.  Many of those companies have decided they no longer need as much office space, when some jobs are performed just as effectively from home or other remote locations.

With a falling dollar, troubled real estate sector, stock market overdue for a correction, and cryptocurrencies coming into the crosshairs of regulators and taxation, precious metals seem to be one bright spot remaining.  I believe we may even see the commodity sector take a breather soon, as the effects of stimulus funds on the economy begin to slow. There were hopes that the vaccine rollout would open up the world economy, but some countries and states with the highest vaccination rates are struggling with new COVID outbreaks, not to mention the countries that have yet to gain a footing in vaccine administration quests.  Travel continues to be largely restricted, and there is animosity between areas that have opened up and others trying to stay locked down.

In December, we mentioned palladium would likely reach new highs in 2021 - and it has.  It is currently near a record of $2,990, at the time of writing.  I believe it would be wise to take some profit here, if you purchased palladium when we recommended to do so during the recession of 2020.  I expect it to finish the year strong, but perhaps a couple hundred dollars lower than where it is now.  Even that would be a strong gain for the year.

Platinum is near the $1,300 level projected for 2021, currently at $1,259, at the time of writing.  But I would continue to hold on to platinum at these levels.  Within the next few years, we might see platinum return to a price above gold, which used to be the norm. I believe that when that happens, it will be a result of platinum rising, rather than gold falling.  Industry trends continue to support platinum going forward, and I believe we may breach the $1,300 target by year’s end.

Gold and silver are harder to explain, as the markets for both have become more bifurcated between spot and physical price.  We did project higher premiums for gold and silver in 2021, but they have continued to increase beyond what I expected.  While the current spot price of gold ($1,845 at the time of writing) is lower than the start of the year, the premium to purchase a 1 oz Gold American Eagle coin is currently about 15%, or double what it was in December.  This puts a 1 oz Gold Eagle near $2,100, depending on how you pay.  While we may see a small correction before the year’s end, it is still within reason to expect that we could see a $2,100 spot price for gold.  The price for a 1 oz Gold American Eagle, at current premiums, would be around $2,400 by year’s end, which is slightly higher than previously projected.

I thought silver would trade in a $30 range, and we will likely be there soon.  But as with gold, premiums have increased significantly since December.  $30 spot silver back then translated into $38 for a 1 oz Silver Eagle coin.  Today, at $27.43 spot price at the time of writing, a 1 oz Silver Eagle coin is around $40.  As with gold, the spot price is currently lower than projected, but the price to purchase physical is higher.  I guess that makes it somewhat of a wash.  In any event, the demand for gold, silver, and platinum continues to be strong, and these metals look like safe investment options in the months and years ahead.  Palladium will also be a reliable store of wealth, but here, I would recommend harvesting some gains.  There is currently very little slack in the physical precious metals markets.

While no one is in favor of calamity or catastrophe, these two negative scenarios remain distinct possibilities.  A hiccup on the geopolitical or economic front could spell disaster for fiat currencies and stock markets the world over.  But the same events could make the gains in precious metals seem explosive by comparison, and our projections miniscule.