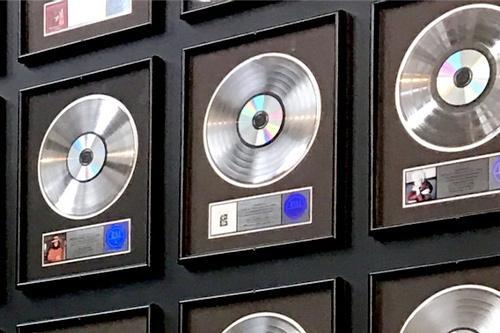 The year was 1976, and the Record Industry Association of America had just created a “Platinum” certification to signify when an artist sold 1,000,000 copies of a song or album. Previously, the highest achievement was the association’s “Gold” certification. But in 1976, the price of platinum, the precious metal, exceeded the price of gold, and mirroring this takeover, the association instituted its new “Platinum” level, which now represented the most prestigious accomplishment in the recording industry. Johnny Taylor was the first to have a song go Platinum, with “Disco Lady.”

Throughout history, we have seen the precious metals platinum and gold jockey for position, in terms of price, each leading the other for different periods of time. Gold has been leading the price game since 2012, but momentum has been building for platinum since we first discussed its relative value in this November edition of “Metals Minute.” Platinum has climbed 47% since then, and 19% so far in 2021.

Today, I’ll present some history about the precious metal known as platinum, and what makes it an attractive investment in 2021.

It would probably be safe to say that today, fewer people are familiar with platinum than they are with silver or gold, but, as history shows us, this is not a recent phenomenon. When the early Spanish conquistadors came to the Americas looking for gold, they sometimes found a strange white metal they called “platina,” which meant “little silver.” Not understanding what it was, they would throw nuggets of the metal into the river, in hopes that the white material would eventually “cure” into gold. At the time, they did not realize that they had found a metal that was 30 times rarer than the gold they sought. Today, all the gold ever mined could be contained in about three Olympic-sized swimming pools. All the platinum ever mined would reach around an “ankle deep” level of only one of those pools.

The earliest evidence of platinum use dates back to seventh-century Egypt, where the metal was used to adorn caskets, presumably since, like gold, platinum does not tarnish or corrode with time. Even farther back in time, there is evidence of platinum being used on the western coast of South America over 2,000 years ago.

In the year 1557, Italian researcher Julius Scaliger wrote about a peculiar metal found in Central America that would not melt (melting point is over 3,200 degrees Fahrenheit, considerably higher than gold or silver).

Platinum was introduced to the European continent in the 1750s. Today, most of the world’s primary platinum mines are located in South Africa, Russia, and Zimbabwe. Platinum is also sometimes produced as a by-product of copper and nickel refining. Of the world’s known platinum supply, 75% or more is in South Africa. The United States has a single primary platinum mine located in Montana, although smaller quantities of the metal are obtained at nickel and copper mines elsewhere in the country.

There are more uses for platinum today than there were when the conquistadors threw the metal nuggets into the river. Besides jewelry, the most familiar use is in the production of catalytic converters for automobiles. A catalytic converter cleans up fumes produced by modern internal combustion engines, before releasing those fumes into the atmosphere. Higher environmental standards have increased the demand for platinum worldwide. China and Europe, for example, introduced new pollution standards that went into effect last month. The United States will most likely soon follow in their footsteps. Platinum also plays an important role in hydrogen fuel cell development, which is ramping up now in South Africa. The conquistadors of old didn’t have cars, pollution, or fuel cells to worry about.

Unlike gold, which is considered a safe-haven asset in times of stock market turmoil, platinum tends to do well when stocks and the economy at large do well. The reason for platinum’s recent rally has to do partly with perceptions about growth potential in the global economy, and increased demand from auto manufacturers as the economy improves. As COVID-19 vaccine programs expand worldwide, the global economy (and demand for platinum) is expected to improve. There has also been increased investment demand for platinum through ETFs and other commodity-linked securities, as well as heightened acquisition levels of coins and bars comprised of the metal. Total increased demand for 2021 was estimated at 123% over 2020, according to the World Platinum Investment Council. The U.S. Mint released the 2021 installment of its annual Platinum American Eagle Proof coin in early February, and the United States Gold Bureau is preparing to begin its launch of PF70 versions of the coin Thursday February 25th.

When we consider the increasing demand for platinum in light of recent supply constrictions, the case for the metal becomes clearer. The President of South Africa has recently extended Category 3 coronavirus restrictions, which may prevent platinum miners in the country from reaching full production levels. While some COVID-19 restrictions impose greater burdens on sectors of the economy that don’t have much, if anything, to do with mining precious metals, the social distancing requirements that are often part of coronavirus precautions impact labor-intensive platinum mining operations throughout the region. A new strain of the virus has shown up in South Africa, and data is so far inconclusive on the efficacy of current vaccines against the variant. When pandemic-related lockdowns were most widespread across the globe in the early and middle months of last year, the slowdown in platinum production was matched by a slowdown in automobile production. Now, there is increased activity in the global auto sector, but platinum constrictions prevail due to local conditions in the world’s largest platinum producing country, which perpetuates already hindered production efforts. There are also supply constraints building for gold and silver for various reasons.

Additionally, there is a general weakening of the U.S. dollar, which has been affecting the prices of most commodities, platinum included. One of the advantages of platinum is that it is not considered to be a monetary metal in the same light as gold or silver. As such, the manipulating mechanisms used by the bullion banks to force down the paper prices of gold and silver are not employed to the same degree for platinum (or palladium, for that matter – palladium’s rapid rise over the last two years illustrates what might also be possible for platinum, in the long run). Some speculate that platinum may overtake gold again, in terms of price, returning to a period that enabled the slogan “going platinum”. While I believe platinum and silver will likely be the best performers in 2021, I believe gold will also do well and stay above the price of platinum this year.

That being said, we are a stone’s throw away from our 2021 price projection for platinum ($1,300 per ounce) being realized, as the metal takes a breather today. I expect platinum prices to soften a little bit, as investors pocket some gains on the metal, before continuing to climb later this year. Platinum is still $1,000 away from its previous high in 2008. For those not yet exposed to platinum, times like now provide a great incentive to diversify your metals portfolio with one of the best performers of the year so far. If I were providing an update for platinum projections this year, I would adjust them higher, for the reasons mentioned above.

Posted in: Investing, Platinum
By Bill Stack
Did you like this post?
0
0
Related Posts
Search The Blog