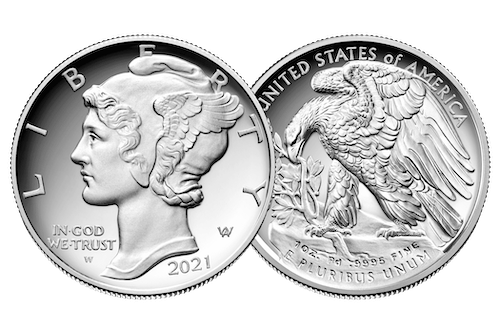 Beginning at noon Eastern Time on Thursday, September 2, 2021, the United States Mint will begin offering the current-year installment of its Palladium American Eagle investment-grade coin. Each year, the Palladium Eagle investment-grade coin is issued in an alternate finish style, ranging from classic proof to uncirculated to reverse proof. This year’s issue will feature the always stunning classic proof finish, just as it did in its inaugural run in 2018.

The 2021 Palladium American Eagle Proof will be subject to mintage and product limits of 12,000 coins and a household order limit of one. This year’s Palladium Eagle Proof coin will be struck to meet the same specifications as its preceding investment-grade counterparts. The coin will be legal tender and will carry a $25 face value (although its face value is essentially nominal, as the coin realizes its value primarily by way of its precious metal contents) and will be comprised of 1.0005 troy ounces of 99.95% fine palladium. As in years past, the coin will have reeded edges and will feature the “W” mint mark, indicating production at the West Point Mint in New York.

Clients of the United States Gold Bureau will have the opportunity to invest in the 2021 Palladium American Eagle Proof coin later this fall. While investment-grade coins can be purchased directly from the U.S. Mint, those items do not come pre-graded with a quality score from one of the leading third-party coin grading outfits, like the Numismatic Guaranty Corporation (NGC). To obtain a grade for a coin purchased directly from the Mint, customers would have to take on the burden of completing the grading process with an organization like NGC on their own dime and time.

In our continued effort to provide the best service and bring the highest-quality investment products to our clients, the U.S. Gold Bureau completes the grading process for our investment-grade coins before any of those pieces are offered for purchase. Our team is proud to offer an investment coin inventory made up almost exclusively of PF70 pieces, which is the highest grade available for proof coins.

Keep an eye on our website to learn more details about the launch of the 2021 Palladium American Eagle Proof coin from the U.S. Gold Bureau later this fall or sign up for notifications.

Just as its specifications will match those of coins from years past, the obverse and reverse designs of the 2021 Palladium American Eagle Proof will also remain the same as previous installments of the coin. The motifs on both sides of the coin are high-relief adaptations of early-20th century designs created by famed, world-renowned designer Adolph A. Weinman.

The reverse of the 2021 Palladium American Eagle Proof features another high-relief replica of an early-20th century Weinman design. In this case, the motif reflects the image Weinman created for the backside of the 1907 American Institute of Architects Gold Medal, which features an eagle standing atop a rock, clasping a branch – presumably an olive branch – in its beak. The inscriptions included on the reverse of the Palladium Eagle coin include “UNITED STATES of AMERICA” along the coin’s top rim, mirrored by “E PLURIBUS UNUM” along the bottom, and the coin’s “1 OZ. Pd .9995 FINE” metal contents appearing just above that. The $25 face value of the coin is inscribed to the left of the branch being held by the bird.

The finish of the investment-grade Palladium Eagle alternates every year. In 2018, it was released with a proof finish, followed by the impressive reverse proof finish in 2019, an uncirculated finish in 2020, and again as a proof coin for 2021.

Each different metal iteration of the American Eagle coin was authorized by a separate piece of legislation passed by the U.S. Congress. The program’s palladium installment was given the green light in 2010 by way of the “American Eagle Palladium Bullion Coin Act of 2010,” although, the first coin under this authorization would not be released for another seven years. The Palladium Eagle bullion version is the official palladium bullion coin of the United States and is the only palladium coin to have its metal contents, purity, and weight guaranteed by the United States government.

Each Palladium Eagle to date has been struck at the West Point Mint in New York state and carries a legal tender face value of $25.

The U.S. Mint’s American Eagle investment-grade coins have garnered reputations as stable stores of value for Americans’ hard-earned wealth, generally enduring even through troubled, turbulent, and uncertain times like those we are experiencing now. With new installments launched every year, the Palladium Eagle is a reliable investment vehicle for protecting your nest egg for years to come.

Keep an eye on our website to learn more details about the launch of the 2021 Palladium American Eagle Proof coin from the U.S. Gold Bureau later this fall or sign up for notifications.