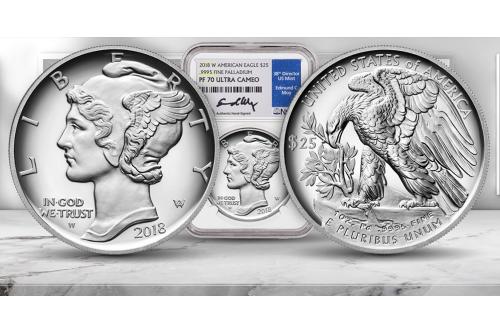 Hot off the heels of its stellar 2017 debut, the Palladium American Eagle is back for a 2018 victory lap! The U.S. Mint will be releasing 2018 Palladium Eagles starting September 6th, and if this year’s run is anything like last year’s, investors are in for a treat. 2017 marked the first time ever a U.S. Mint coin was struck from palladium and the first time the coveted high-relief style was used for any coin other those made of gold. 2017 was also the first time the American Eagle series had been updated since the late 1990s when the Mint released its 1997 Platinum Eagle. All this led to an incredibly successful 2017 Palladium Eagle launch marked by steep levels of anticipation, impressive market demand and high degrees of desirability that we’re still seeing today. Last year’s premiere Palladium Eagle run was made up solely of bullion coins. Raising the bar for 2018, the Mint is expected to issue just a Proof version, making this year’s pieces the first Proof palladium coins ever to be struck by the U.S. Mint! Mintage numbers are minimal again for 2018, with a mere 15,000 pieces available for purchase, meaning the coins will most likely be in incredibly high demand and will almost certainly sell out fast. Each Proof Palladium Eagle boasts an impressive .9995 fine palladium content, a $25 legal-tender face value, and W mintmark. Also starting September 17th, the United States Gold Bureau will be offering our clients the opportunity to get their hands on one of these coins of their very own! 2018 Proof Palladium Eagles from the U.S. Gold Bureau will be graded in perfect Proof 70 condition, as deemed by the Numismatic Guaranty Corporation, and will be accompanied by a certificate of authenticity hand-signed by former U.S. Mint Director, Ed C. Moy. This unique feature has proven to be a substantial value-add for these coins and is offered exclusively to U.S. Gold Bureau clients. Give our team of Precious Metals Experts a call today to reserve your very own 2018 Proof Palladium American Eagle (800-775-3504)!

What is the History of Palladium American Eagles?

A palladium version of the beloved American Eagle coin series was authorized by the American Eagle Palladium Bullion Coin Act of 2010. The act called for “a $25 coin of an appropriate size and thickness, as determined by the Secretary, that weighs 1 troy ounce and contains .9995 fine palladium.” The law allows for the U.S. Treasury Secretary to issue these Palladium Eagles in both uncirculated and Proof versions, with the latter being the only version permitted for production at the West Point Mint. Also, the "surface treatment" of the coins is required to differ "in some material way from that of the preceding year," meaning that if the Palladium Eagle program continues, other finishes will undoubtedly be employed in future years’ runs, making the 2018-W issues that much more unique and valuable.

What Do Palladium American Eagles Look and Feel Like?

As required by law, all Palladium Eagles are to be struck in high-relief style, a finish widely regarded as both beautiful and high in quality. The 2018 Palladium Eagle, like its 2017 predecessor, carries obverse and reverse designs created by the famed artist and sculptor, Adolph A. Weinman. The coin’s head boasts a portrait of Lady Liberty initially struck on the U.S. Mercury dime from 1916 to 1945. In this image, a young Liberty dons a Phrygian or “liberty” cap with wings on either side. This winged style led to the dime often being compared with denarii of the Roman Republic, coins which sometimes bore images of the Roman god, Mercury. Mercury also famously wore a winged cap, and thus the association between Weinman’s Liberty and the Roman Mercury was made. According to Weinman, however, the symbolism was much more straightforward. He noted that his winged cap simply epitomized the idea of “liberty of thought.” The 2018 obverse also bears the word “LIBERTY” spaced to stretch across the full top half rim of the coin, along with “IN GOD WE TRUST," its “W” mintmark, “2018” and Weinman’s initials occupying the bottom half. The reverse carries a high-relief replica of Weinman’s 1907 American Institute of Architects’ Gold Medal design. On it is an American eagle bowing to grasp an olive branch in his beak surrounded by the words “UNITED STATES OF AMERICA” and “E PLURIBUS UNUM.” The coin’s precious metal specifications are also struck near the bottom, while its $25 face value sits to the left of the eagle. Each 2018 Palladium Eagle is about 1.3 inches in diameter – or slightly more than half the length of a standard chapstick tube – and weighs about 31 grams, which is just a bit heavier than an AA battery. They are small and easy to handle, making them an easy addition to physical precious metal holdings. 2018 Palladium Eagles are on track to meet, if not exceed, levels of demand and value of their 2017 predecessors, and is projected to be a great, long-lasting way to bolster any investment portfolio.

When the early Spaniards first stumbled upon a white metal it looked similar to silver, they nicknamed the metal "Platina." When translated from Spanish to English, Platina means "little silver." Since it looked lighter in color than silver the Spaniards placed the metal back in the ground to "grow into" silver. Now we know better and have classified the metal as platinum.

Platinum is denser than palladium. Being denser, platinum can be used in jewelry, dentist's tools, and in coins to withstand more abuse of daily use. In fact, platinum is used in high-end watches, because keeping the correct time is of utmost importance.

What is Platinum Used In?

Because of their unique properties, both platinum and palladium are heavily used by the auto industry to make catalytic converters for vehicles. About 3-7 grams of platinum group metals are in a standard catalytic converter. Platinum, in particular, is also valued by jewelers since it is heavier and more durable.

Historically, platinum prices are frequently higher than gold, but we at the United States Gold Bureau have seen platinum fall under the price of gold and thus makes it an opportune time to buy since it is 1/10 more rare than gold we should see it surge in the future. As seen in the past, Platinum and palladium will fluctuate in tandem, but at the time of this writing, palladium is $180 above the price of platinum per ounce.

Palladium was named by its discoverer, William Hyde Wollaston in 1803 after the Greek goddess of wisdom Pallas, as well as the asteroid bearing the same name.

Palladium has many of the same chemical properties as platinum, but half as dense which allows it to have a lower melting point.

Palladium is 15 times more rare than platinum. If we take the above statistic about the rarity of platinum, which is 7.65 million ounces and divide that by 15, we find that the world supply of palladium should be about 510,000 ounces. This amount of palladium fits into one room of a house!

What is Palladium Used In?

Many analysts believe palladium is gradually replacing platinum in the industrial sector because of its lower cost and ability to perform virtually the same role as platinum. Palladium can be found in automotive catalytic converters, electrodes in medical equipment, and in fine jewelry.

Has surged past platinum since it is used in more so in the automotive industry than in the past. Currently, approximately $180 dollars over platinum.
September 6, 2018
Did you like this post?
0
0
Search The Blog
Categories
Recent Posts