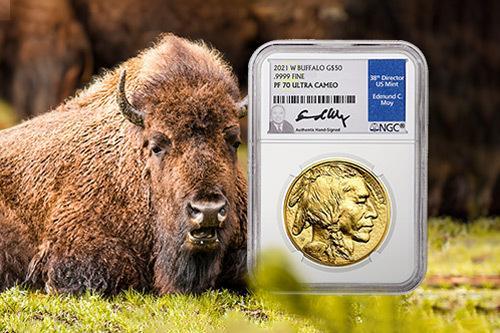 Since 2006, the U.S. Mint has struck and released this unique gold piece for investors worldwide. The Gold American Buffalo, authorized by the Presidential $1 Coin Act of 2005, was the first 24-karat gold coin produced by the U.S. Mint, undoubtedly one of the coin’s most defining features. Additionally, this modern-day precious metal piece harkens to the “golden age” of U.S. coin design by recalling one of the country’s most lauded and widely recognized circulating metal pieces – James Earle Fraser’s Buffalo – or “Indian Head” – nickel, which was struck, with only slight design modifications along the way, from 1913 to 1938.

The 2021 Gold American Buffalo Proof 70 is now available to clients of the United States Gold Bureau will have the opportunity to add one of these stunning coins, graded at the perfect PF70 level, to their investment portfolios.

The United States Mint made history in 2006 with the launch of its first-ever 24-karat gold coin – the Gold American Buffalo. The United States embarked upon a quest to create a domestically produced .9999 pure gold coin as a means for enabling the country to compete in the global 24-karat gold coin market, which, by the turn of the 21st century, had grown extremely popular with investors around the world. Since the United States did not offer a gold coin of such purity before the launch of the Gold American Buffalo, investors turned to non-U.S. pieces like the Canadian Gold Maple Leaf and the Austrian Gold Philharmonic coin to fulfill their 24-karat gold coin needs. As a result, such international favorites skyrocketed to the top of global gold charts, leaving the U.S. behind the curve in the gold coin market.

To capitalize on the booming 24-karat gold coin industry and bring investment dollars back to the U.S., Congress signed the Presidential $1 Coin Act into law in December of 2005. In addition to authorizing the production of $1 coins that would honor each United States president, as the law’s name implies, the 2005 Presidential $1 Coin Act also paved the way for the country’s first-ever 24-karat gold coin – the Gold American Buffalo. This authorization set the stage for the U.S. to become a leader, yet again, in the global gold coin market.

In 2013, the Mint produced a striking reverse proof iteration of its standard investment-grade coin. A reverse proof coin features a visually impressive finish in which the coin’s fields – or the recessed portions of its design – are frosty, and the coin’s devices – or the raised portions of its design – are smooth, with a mirror-like sheen. The opposite is true for standard proof coins, hence the name “reverse proof” for these alternative versions. While the result is quite different, the minting process for reverse proof coins is primarily the same as standard proof coins. The main difference in the making of the two types comes into play in the die preparation stages. For reverse proofs, rather than the frosting effect being applied to the entirety of the coin die’s surface, as is the case for standard proof coins, the die first receives an overall high-sheen finish, which is followed by targeted frosting to the appropriate portions of the design. In the past, this frosting step was achieved by applying an acidic solution to the coin die. Today, a computerized machine applies the frosting effect by laser.

Since its inception, the Gold American Buffalo Proof coin – and its bullion counterpart, for that matter – has featured the same obverse and reverse designs, both of which are modified replicas of the images struck on James Earle Fraser’s Buffalo – or “Indian Head” – nickel from 1913 to 1938.

The modern-day Gold Buffalo’s obverse features a right-facing portrait of a Native American man donning low-slung braids and two feathers in his hair. The word "LIBERTY" lines the top-right edge of the coin's obverse, matching Fraser's original design placement. Additionally, the Gold American Buffalo Proof's strike year and the letter "F," representing the artist's last name, appears diagonally opposite the "LIBERTY" inscription. The coin's "W" mint mark, indicating production at the U.S.'s West Point Mint facility, is struck just above that, at the nape of the man's neck.

The modern-day Gold American Buffalo Proof’s reverse features Fraser’s image of an American buffalo standing atop a patch of land, as depicted in the early 20th century Buffalo nickel’s “Type I” iteration, which was struck only for a few months in 1913. Later that year, the design was altered slightly to show the patch of land that the buffalo stands upon in a slimmer form, its lower boundary drawn above the coin's "FIVE CENTS" denomination. Alternatively, the patch of land in the previous Type I version stretched to the bottom edge of the coin’s surface, providing a backdrop for the coin’s five-cent face value.

In addition to our bullion Buffalo products, the United States Gold Bureau is proud to offer our clients an inventory of investment-grade Gold American Buffalos made up almost entirely of perfect-grade PF70 coins. The U.S. Gold Bureau provides investors with the opportunity to purchase investment-grade precious metals coins that have been graded by an industry authority such as the Numismatic Guaranty Corporation (NGC) before purchase. Coins purchased directly from the U.S. Mint, on the other hand, do not come pre-graded, and an investor would need to take that additional step on his or her own time (and dollar) after the coin is received if desired.

So, what is the difference between the bullion and proof Gold American Buffalos? And which one is the better option for your investment needs?

Each year, the U.S. Mint issues populations of varying sizes of both bullion and proof Gold American Buffalo coins, in addition to bullion and proof products for their other coin programs. In short, bullion gold – generally speaking, not just related to Gold Buffalos – is refined gold and is offered either in the form of coins or rounds produced by the U.S. or other mints, or precious metals bars, which are made in a variety of sizes ranging from one gram to one kilo. Bullion gold is a commodity and, as such, is tied to the gold commodity market. The precious metals index price is known as the "spot price," and since it is tethered to the commodities market, it fluctuates up and down based on activity in that sector.

On the other hand, proof – or “investment grade” – coins derive value from their rarities, levels of consumer demand, artistic appeals, overall qualities, and other such defining characteristics, rather than from their precious metal weights. Proof coins are not traded on or tied to an index-based market and, as such, enjoy more stable values relative to their bullion counterparts.

Proof coins are akin to other investment items that are generally known to appreciate with time, such as real estate, classic cars, and fine art. In contrast, bullion coins are more likened to other market-based commodities such as oil, corn, or natural gas.

Which option is better for you and the long-term safeguarding of your wealth depends on your unique financial and life situation and goals. The United States Gold Bureau generally recommends that clients diversify their holdings, both into and within precious metals, to achieve an asset mix that suits their individual needs. It is also often prudent for investors to regularly reassess and rebalance that mix to keep pace with life changes.

Additionally, PF70-graded coins from the U.S. Gold Bureau are accompanied by a one-of-a-kind certification label hand-signed by former U.S. Mint Director Ed C. Moy. This unique value-add is offered exclusively to clients of the U.S. Gold Bureau, and coins accompanied by the Ed Moy label have enjoyed extreme popularity levels and often enhanced return values over the years.

Edmund C. Moy boasts an esteemed career spanning both the private business and public service sectors. He was nominated to the role of Director of the United States Mint in 2006 by President George W. Bush, a role he served in from September of that year through early January 2011. Before the Mint Director role, he operated as President Bush's Special Assistant to the President for Presidential Personnel from 2001 to 2006, a job in which he oversaw the selection process for presidential appointment candidates in the areas of human, natural, and cultural resources. He was also part of the 2003 transition team for the new Department of Homeland Security formed in response to the September 11th attacks two years earlier. Outside of government, Moy has held various roles in the private sector, both prior to and following his tenure in public service.

Posted in: Investing, History, Gold
By United States Gold Bureau
Did you like this post?
0
0
Search The Blog
Categories
Recent Posts