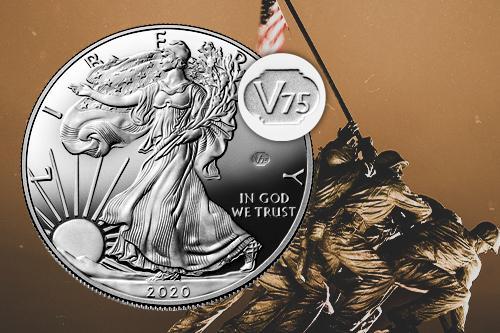 2020 marks the 75th anniversary of the end of World War II. To honor this significant global benchmark, the United States Mint has introduced a slate of WWII commemorative coins and medals set for release in early November 2020.

To this day, WWII remains the bloodiest conflict and largest war in history, with 40 million to 50 million deaths throughout its six-year duration. “[T]o salute the ‘greatest generation’ that rose to the occasion” of preserving democracy and defeating the Axis powers, the U.S. Mint is releasing a second 2020 installment of its signature American Eagle Proof coins in both gold and silver, each bearing what’s known as a “privy mark” that was specially designed for the occasion. Additionally, the Mint has also introduced a commemorative 24-karat gold coin and silver medal featuring “one of the most meaningful designs created by United States Mint artists.”

From 1939 through the better part of 1945, the Second World War was fought on multiple fronts, eventually consuming virtually all countries on the planet, as well as all of the world’s superpowers at the time, which included Germany, Italy, and imperial Japan, making up the Axis powers, and France, Great Britain, the United States, and the Soviet Union, making up the Allies. The Allied forces also included China, to a lesser extent.

The European front of the war began in early September 1939 following the mobilization of Nazi German troops into Poland and the subsequent declarations of war issued by Great Britain and France. By December 8, 1941, the United States was fully engaged in the Asian front of the war, following the surprise Japanese attack on Pearl Harbor. The European war continued to toil on in its horrific fashion until officially ending on May 8, 1945. The war with Japan ended in early September that same year. As of September 9, 1945, six long years after it started, World War II had officially come to a close.

For the second time this year, the U.S. Mint is releasing its signature gold and silver American Eagle-W one-ounce proof coins. The late-year issues are special releases within the American Eagle Proof series that were produced specifically to honor the milestone 75th anniversary of the end of WWII. The standard-issue gold and silver American Eagle-W one-ounce proofs were released in March and January 2020, respectively. The U.S. Mint will release these special End of WWII coins on November 5, 2020, at noon eastern time.

Both the gold and silver End of WWII coins mirror their standard-issue counterparts in terms of design and specifications. However, setting them apart is the fact that these late-year special releases will bear a specially designed privy mark, signifying the importance of the occasion.


A privy mark, as the U.S. Mint explains, “is a symbol that communicates information about a coin’s production.” While, traditionally, countries and mints have employed privy marks to identify the producer of a coin, in recent years, the emblems have been used to “commemorate events and for other marketing purposes.” Today, the specific mint at which a coin was produced is identified by alphabetical mint marks (such as the “W” for the West Point Mint, “S” for the San Francisco Mint, etc.) versus the pictorial privy marks of the past.

The U.S. Mint has a long history of using privy marks on its coins to represent specific production details. For example, in the 1800s, the Mint included small arrow devices on U.S. coins that had undergone weight changes from the previous year. "Although records don't refer to these arrows as privy marks," the Mint points out, they essentially served the same function in that they were used to communicate details about a coin’s production methodology.

Another recent example of the U.S. Mint using these marks is the eagle privy mark struck on the American Eagle Platinum Coin from 2009 through 2014 as part of the Preamble to the Constitution series. In addition to signifying a coin was part of the Preamble series of Platinum Eagles, the privy mark, which took shape as the profile view of an eagle, celebrated the discovery of an original coin punch found at the Philadelphia Mint.

Additionally, coins in the U.S. Mint’s American Innovation $1 Coin Program, which were issued beginning in 2019 and will continue through 2032, will include a different privy mark each year. With design concepts and themes changing, the Mint notes that using the privy mark on these coins is intended to "unify the designs" over the course of the program’s 13-year run.

This year, the Mint’s End of WWII gold and silver American Eagle Proof coins will both bear an intriguing take on the privy mark concept in honor of the Second World War’s coming to a close 75 years ago. Both the late-year Eagle Proofs will be struck with a privy mark that features the characters “V75”, with “V” representing “Victory” and “75,” of course, representing 75 years since the end of the war. The “V75” is surrounded by a cartouche, or frame, in the aerial-view shape of the Rainbow Pool in Washington D.C.’s West Potomac Park. As the Mint puts it, the Rainbow Pool “is now an integral part of the World War II Memorial, prompting somber reflection, appreciation, reverence, and hope for the thousands who visit each year.”


In addition to the unique privy mark that will appear on both the gold and silver American Eagle Proof End of WWII coins, perhaps one of the most striking and appealing characteristics of the gold proof is its extremely low mintage and product limits.

In an eye-popping display of symbolism, the Mint will produce a mere 1,945 Gold American Eagle End of WWII Proof coins, making it perhaps one of the smallest production runs set by the Mint in modern history. The 1945 figure, of course, is intended to represent the year the Second World War ended.

Coupled with the unique appeal of the “V75” privy mark and the fact that this coin is produced in honor of one of the most significant human struggles in history, such a low mintage number has the potential to set the Gold American Eagle Proof End of WWII coin up as an extremely appealing and perhaps even lucrative investment opportunity for precious metals enthusiasts across the country.

The Silver American Eagle Proof End of WWII coin will be produced in much higher quantities, with mintage and product limits both set at 75,000. The silver proof, like its gold counterpart, will also retain a household order limit of one.

The End of WWII Gold American Eagle Proof will display the same striking depiction of Lady Liberty on its obverse as does its current-year counterpart. Liberty is shown elegantly, holding a torch in her right hand and a branch in her left. She’s set against a backdrop of the sun rising over the United States Capitol, its rays beaming brilliantly in the distance. The coin’s reverse, which also bears the standard Gold American Proof design, shows an eagle in flight, descending toward a mother eagle cradling her hatchling.

Likewise, the silver End of WWII American Eagle Proof will carry the same designs as its annual standard-issue counterpart on both its obverse and reverse. Striking a similar chord to the Gold American Eagle's tone and theme, the silver coin's obverse shows a dynamic Lady Liberty in full stride, this time walking toward a beaming sun cresting over the peaks of a majestic American mountaintop. The silver coin's reverse proudly displays John Mercanti's heraldic eagle, which bears a shield over its chest and is positioned below 13 five-pointed stars.

As we wrote about, 2020 is expected to be the last year we’ll see the current designs struck on both the silver and gold American Eagle coins. The November 2020 End of WWII special releases could be investors’ last opportunity to get their hands on coins bearing the series’ original designs.

In addition to bearing the same designs, both the standard-issue and End of WWII gold and silver proof Eagles are struck at the West Point Mint in New York State. As such, all four coins bear the “W” mintmark on either their obverse or reverse sides.

Both the early and late-2020 gold American Eagle Proof releases are approximately 1.3 inches in diameter, have reeded edges, carry a $50 face value, and ring in at around one troy ounce of 22-karat gold. Additionally, the standard-issue Gold American Eagle Proof is also struck in fractional sizes, including one-tenth ounce, one-quarter ounce, one-half ounce, and of course, the full ounce.

Likewise, the silver American Eagle Proofs reflect the typical specifications for the series: approximately 1.6 inches in diameter, reeded edges, $1 face value, and a composition of 1 troy ounce of .999 fine silver.

As “companion pieces” to the End of WWII American Eagle Proof coins, the U.S. Mint will also release a 24-karat gold coin and 99.9% fine silver medal as part of its End of World War II 75th Anniversary Coin and Medals Program.

Both the gold coin and silver medal are virtually identical in terms of their obverse and reverse designs, save for the inscriptions on the two pieces' reverse sides. On their obverses, the coin and medal both show a close-up image of an in-flight eagle clasping an olive branch – the symbol for peace – in its right talon with the inscriptions, "1945," "LIBERTY," "WWII," the "W" mintmark and the artist's initials appearing in the left portion of the image. The obverse design was inspired by the 1945 version of the United States’ Great Seal.

The pieces’ reverse design, according to the Mint, “echoes the sun element featured on the obverse of the 1945 World War II Victory Medal,” a fitting choice of inspiration for items honoring the 75th anniversary of that occasion. The design features a partial sun image shining in “noon day brilliance” from the right edge of the coin, flanked by hanging olive branches in the left foreground.

The silver medal’s reverse is much simpler, with a single inscription of “75th ANNIVERSARY” accompanying the common design.

The Mint describes these pieces' design as representing "one of the most meaningful" works of art created by Mint artists.

With these special 2020 End of WWII American Eagle Proof releases, the U.S. Mint reminds us all to pause and “honor those Americans who fought one of the greatest threats our country and world ever faced.” The Mint’s slate of End of World War II 75th Anniversary coins and medals commemorates the “greatest generation” who, “[w]hether here on the home front or on far-away continents and islands…rose to the occasion in spectacular and selfless fashion to meet the challenge and preserve our freedoms and way of life.”