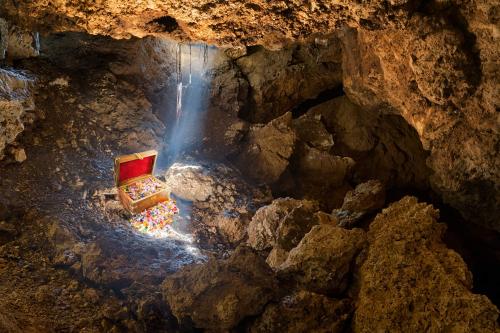 Welcome back for Part II of our Most Valuable Treasure Discoveries series. Tales of lost uncirculated coins, fortunes of the crown and treasure dating back to the Anglo-Saxons. Explore the values, size and discovery methods here in our second installment of the top 10 most valuable treasures ever found.

The largest trove of Anglo-Saxon treasure ever found, worth an estimated $3.9 million, the Staffordshire Hoard was found near the village of Hammerwich, near Lichfield, in Staffordshire, England in 2009. Most of the nearly 3,500 items in the trove consisted of warfare related objects dating back to the seventh century. Amounting to a total of 11 pounds of gold, 3 pounds of silver, and some 3,500 pieces of garnet cloisonné jewelry.

Terry Herbert discovered the artifacts on July 5, 2009, when he was searching an area of recently plowed farmland. Over five days, 244 gold objects were recovered, at which point Herbert contacted the Finds Liaison Officer and the landowner granted permission for a more complete excavation, leading to the discovery of the entire hoard. 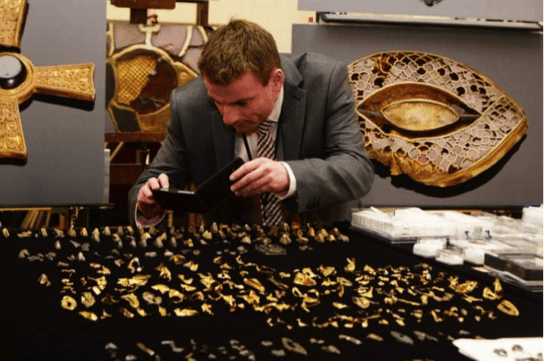 Most of the items in the hoard appear to be military and there are no domestic objects, such as vessels, eating utensils or feminine jewelry- objects which are more common in Anglo-Saxon finds. The average quality of the workmanship is extremely high and especially remarkable in view of the large number of individual objects, such as swords and helmets. In addition to the weaponry, the hoard included several religious artifacts and lots of decorative items.

During the demolition and renovation of the Polish town of Środa Śląska, a vase was found beneath the town’s foundation in 1985. Inside were more than 3,000 silver coins, the largest component of the hoard, dating back to the 14th century as well as gold coins.

Described as “one of the most valuable archeological finds in the 20th century,” experts noted that it is difficult to put a value on the trove since there are few items of a similar type being auctioned anywhere in the world. One estimate from 2001 put the lowest value of the treasure at $50 million. Another book published in 2005 placed the value closer to $100 million. 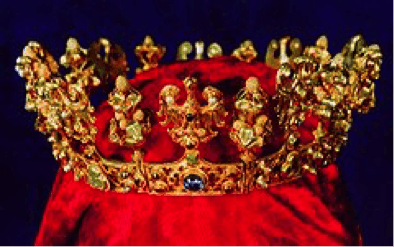 Over a three-year span, another even bigger discovery was found in the same vicinity as the initial find. More silver and gold florin coins were discovered, however many items disappeared before the site was secured by authorities. Many people in the town began scouring sites throughout the town, finding more treasures including coins and even jewelry.

It is now agreed that the treasure once belonged to King Charles IV of the House of Luxembourg. Around 1348, needing funds to support his claim to the King of the Romans, Charles pawned various items to a Jewish banker named Muscho in Środa. Soon afterward, the black plague affected the town, and Muscho was never seen again- it is unknown whether he died of the plague or fled the plague-stricken town. What is certain is that no one ever reclaimed the treasure, which was left hidden in the town for hundreds of years, until it was unearthed in 1985.

The most valuable elements of the treasure include a golden crown, which probably belonged to Blanche of Valois, first wife of Charles IV, gold pendants dating back to the 12th and 13th century, a medieval gold clasp adorned with precious stones, multiple rings, 39 gold coins, and nearly 4,000 silver coins.

Near the site of the Gold Rush of 1849, in the hillside area of Gold County, a couple, known to the public only as John and Mary due to privacy concerns, spotted a rust-covered metal can sticking out of the ground along a hiking trail on their property while walking their dog in February, 2013. After removing the rusty can from the ground, the lid popped off due to the weight of the contents inside. Using hand tools, the couple returned to the site of the first find and unearthed another can about a foot away from the first. Their work eventually resulted in the discovery of eight cans filled with 1,427 gold coins dating from 1847 to 1894, with an original face value of $27,980. 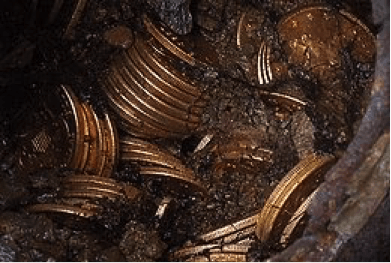 The hoard was assessed to be worth $10 million.

The collection is the largest known discovery of buried gold coins that has ever been recovered in the United States. The Professional Coin Grading Service reports that many of the recovered coins were in uncirculated, mint condition. It further stated that some of the pieces are so rare that they could be worth about $1 million each. The coin grading and certification revealed that over a dozen of the coins are either the finest known or tied for the finest known specimens in the PCGS Population report.

There was widespread speculation regarding the origin of the coins. Many believe that the hoard represented the discovery of the 1901 theft of $30,000 from the San Francisco Mint by employee Walter Dimmick. Some theorized that the hoard was a hidden stash of gold buried by the outlaw, Jesse James, or loot taken by Black Bart, who was known for robbing stagecoaches. Another theory is that the hoard was part of a treasure supposedly hidden by the Knights of the Golden Circle, later to be used to fund a second Civil War. The predominant theory attributes the trove to an unknown individual that chose to bury the coins rather than trust the banks to protect their wealth.

Travel to the start of our series here