More than a century of gold refining means that there’s gold in the air, and the walls, at Australia’s old Perth Mint, reported the Wall Street Journal.

“That's because the gold is in the form of dust that has accumulated in the brickwork of the old Perth Mint since its founding in the 1890s at the height of one of the world's great gold rushes,” wrote the Wall Street Journal’s Rhiannon Hoyle. “Decades of refining resulted in tiny fragments of gold embedding themselves in the fabric of the mint's historic melting house. To paraphrase a well-known bit of mining lore, there's gold in them thar walls!” 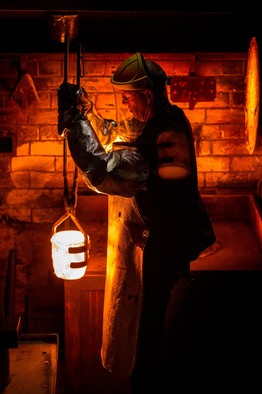 "The gold in the walls isn't visible. You can't see it," said Greg Cooke, how pours gold in the mint’s visitor demonstrations. "But the moment you point it out to people, you see their eyes darting around the room with excitement."

The former gold refinery is now dedicated to documenting and educating visitors about Australia's gold rush. The gold melting house was decommissioned in 1990 and now welcomes tourists who are looking for a gold fix of their own.

The original Mint was founded in 1890s, when thousands of people were working on gold deposits in Western Australia.

“Nuggets unearthed in the red clay of the Outback were brought to Perth to be melted down into gold bars or coins,” wrote Hoyle.

The yellow precious metal was refined with the use of charcoal and coke, which would vary in temperature. Furnaces could reach 3,092 Fahrenheit, causing the gold to vaporize and become lodged in the building’s brickwork.

Because of the building’s official heritage status, Australian preservation officials ensure that the historic Mint’s walls aren’t removed, much less scraped for gold. But other methods have been used to extract gold from the building.

“When 14 of the 15 old furnaces in the Perth Mint's melting house were scrapped, they were crushed and around 18 kilograms of gold was recovered, worth around US$800,000 at today's prices,” wrote Hoyle.

At the newer, modern Perth Mint, security is much stricter. Visitors are not allowed and all employees are screened and approved by the police's Gold-Stealing Detection Unit, known at the mint as the "gold squad." Security and surveillance is exhaustive.

The Perth Mint is known for producing the world's largest gold bullion coin in 2011. Weighing one ton and worth about US$50 million, the coin recently toured Europe and Asia on an exhibit with its own security detail. Heavy-lifting equipment is required to move the massive gold bullion coin.