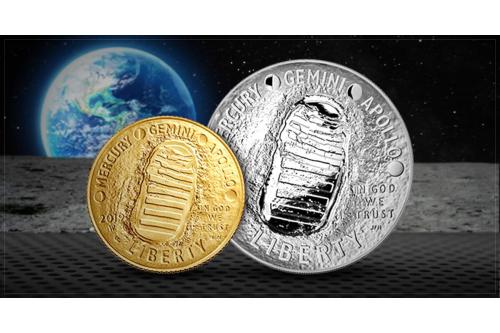 The United States Mint has created a coin to commemorate the 50th Anniversary of the Apollo 11 lunar landing and it is out of this world! Sorry, but we had to… Have you seen how massive the Apollo 11 Proof 70 Silver 5 oz is compared to its gold counterpart? Check out this video by clicking the image below.

With the world eagerly watching, NASA’s Apollo 11 Lunar mission successfully landed the first two people on the surface of the moon. Neil Armstrong and Buzz Aldrin, both American, landed the Apollo Lunar Module Eagle on July 20, 1969, effectively ending the Space Race between the United States and the USSR and fulfilling President John F. Kennedy’s goal of landing a man on the Moon and returning him safely to Earth. Armstrong became the first person to step onto the lunar surface with Aldrin being the second. This unprecedented engineering, scientific and political achievement was the culmination of the efforts of an estimated 400,000 Americans and secured the United States’ leadership in space for generations to come. They spent nearly three hours outside the spacecraft and collected 47.5 pounds of lunar material to bring back to Earth.

And if you couldn’t get your hands on any moon rocks or dust, the US mint is finally rolling out something to commemorate the 50th anniversary of the Lunar Landing. The $5 dollar gold coin is composed of 90 percent gold, six percent silver and the balance copper. The gold Apollo 11 coin will be limited to a 50,000 mintage across all gold product options. This five-ounce Silver Dollar is the first of its kind- it is the only US coin to be made with a proof finish, reeded edge, and curved shape. And what better way to celebrate the first manned Moon landing which occurred July 20, 1969.

The Apollo 11 50th Anniversary Commemorative Coin Act authorizes the production of a $5 gold, a $1 silver, and a half dollar clad coin, all in Proof and Uncirculated versions. It also calls for the production of the five-ounce silver coin in Proof. The .900 fine gold coin, struck at West Point, weighs 8.359 grams and has a diameter of 21.59 mm (0.85 in). The 26.73 gram silver dollar, struck at the Philadelphia Mint, has a fineness of .999 pure silver (a first) and a diameter of 38.10 mm (1.50 in). The clad half dollar weighs 11.34 grams and has a diameter of 30.607 mm (1.205 in); Proofs will be struck at San Francisco, while Uncirculated half dollars will be struck at the Denver Mint. And perhaps the most distinctive trait of the coin is its concave obverse and convex reverse. Ron Harrigal, manager of the US Mint’s design and engraving division, said die preparation proved to be quite the challenge to execute the curved features. The Mins started with the 3-inch coin first and then adapted the findings to the smaller diameter coins. Harrigal said each of the obverse and reverse dies were engraved individually on CNC cutting machinery and hand-finished, essentially making master dies into working dies, eliminating any hubbing.

The obverse design features inscriptions commemorating each of NASA’s Lunar missions, “MERCURY,” “GEMIINI,” and finally “APOLLO,” separated by depictions of phases of the moon in between each phase of NASA’s Lunar Missions to represent the lead up to the first manned Moon landing. A depiction of Neil Armstrong’s footprint on the lunar surface is the main feature of one side of the coin along with the additional inscriptions of “IN GOD WE TRUST,” and “LIBERTY.” The obverse was designed by Gary Cooper, an artist and sculptor based out of Belfast, Maine. His design was chosen as the winner of the Mint’s design contest for the program.

The reverse side’s design features a representation of a close-up of the famous “Buzz Aldrin on the Moon” photograph taken July 20, 1969, which shows the reflection of the visor of Buzz’s helmet with Neil Armstrong, the United States flag, and the lunar lander in the foreground. Half of the surcharges collected will go to the Smithsonian Institution's National Air and Space Museum’s “Destination Moon” exhibit. One-quarter of the surcharges will go to the Astronaut Memorial Foundation, which maintains the Space Mirror Memorial, also known as the Astronaut Memorial, at the John F. Kennedy Space Center in Florida. The other quarter will go to the Astronaut Scholarship Foundation, which awards college scholarships to exceptional students in the fields of science, technology, engineering and mathematics (STEM).
January 22, 2019
Did you like this post?
0
0
Search The Blog
Categories
Recent Posts