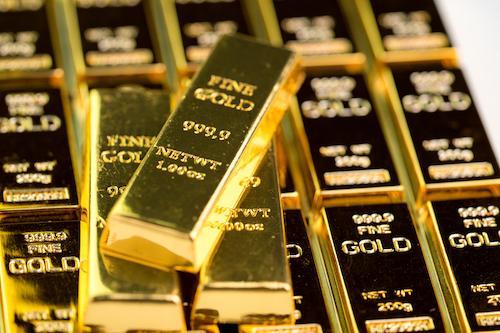 Six thousand years ago, one would have had a single choice when investing in gold bars. In modern times, there are three main types of gold bars: cast, minted and CombiBar. Each type of bar is different and has distinct advantages and disadvantages. The first type of precious metal bars that would become available are cast bars. Cast bars are also referred to as “molded” or “poured” bars. Metal casting, as a practice, dates back to the 4th century B.C. in China, so cast gold bars are known for their traditional nature.

What Are Cast Gold Bars?

Cast gold bars are the simplest and fastest for the manufacturer. First, a mold is created to ensure that the bars will be the proper size and weight. The gold is then heated until it becomes a liquid and poured into the mold. The cast bar will be more rugged and natural-looking than any other process and will likely only have a simple engraving describing the details of the bar and its manufacturer. No two cast gold bars are the same, but this also means that irregularities and blemishes are most common in this type of bar. Gold solidifies quickly, so it will then be taken from the mold and engraved within a few hours.

The casting process is also cheaper than any other. This allows the manufacturer to sell the bars at a lower price to the consumer, so cast gold bars are often the least expensive to invest in. The most commonly known type of gold bars, however, are known as “minted bars”. These are the very shiny, perfectly clean and straight gold bars one would see in a heist movie. The process used to create that perfect finish is more expensive and time-consuming than traditional cast bars, so minted bars usually come at a higher premium.

What Are Minted Gold Bars?

Minted bars come in two different types. When the manufacturing of minted bars first began, they were simply cast bars that had been fed through a compression machine. These bars would then have a more uniform shape and size. This method is still in use, but more commonly a “continuous casting machine” is used to create minted gold bars from scratch. There is still a casting process, but instead of individual bars, a long strip of metal is produced. This piece is then cut down into bars, which have no marks or blemishes.

Each bar is then inspected to make sure it is the proper weight and size, and those that fail will be put into a large furnace. When these bars have softened, a striking process will begin to ensure their uniformity. Bars that pass inspection are polished, cleaned, and dried. Minted bars tend to have a more complex finish and are incredibly popular with gold investors. This makes them much easier to resell than cast bars, but it also means that they are invariably more expensive to buy in the first place. These bars are often securely packaged, and they derive a significant portion of their value from that packaging. Opening the packaging is likely to decrease the value of a minted gold bar, so some collectors and investors consider it a drawback, as it does not allow you to touch the bar itself.

What Are Combi Gold Bars?

The CombiBar, created at the Swiss refinery Valcambi, is the newest innovation in gold bars. In 2010, Valcambi, Edelmetall-Service GmbH & Co. (ESG), and the German company Heimerle + Meule joined to produce and market the CombiBar. Due to issues with the global economy that summer, gold investors started requesting a higher number of smaller and more flexible gold bars. The newly invented CombiBars were the size of a credit card.

They contain fifty grams of gold, and can be broken into pieces as small as one gram by hand. With a purity of of 99.9 percent gold, the CombiBar follows a similar process and has a similar shiny appearance to minted gold bars. The main difference between the two is that the size and versatility of the CombiBar makes it accessible to a wider consumer base. The CEO of Valcambi, Michael Mesaric, said, “The rich are buying standard bars or have deposits of physical gold. People that have less money are buying up to 100 grams,” and also noted that pieces of the CombiBars could also be used as “an alternative method of payment,” increasing their usability. However, as is often the case, buying in lower increments does mean that, per gram, the CombiBar is the most expensive of the gold bar types. Cast bars will have the least return on an initial investment, but are the cheapest per gram and are often preferred by collectors due to their traditional nature. Minted bars are more expensive than cast and less than CombiBars, but CombiBars are versatile and can be bought in smaller quantities. Each type of bar is best used for a different purpose, and investment decisions can easily be made based on the intended use of the gold bar.