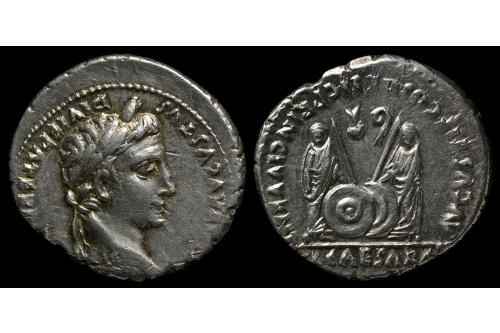 Few civilizations throughout history have made such a profound impact on the human story as that of the Twelve Caesars of the Roman empire. From influential styles of governance to lasting geographical influence to technological ingenuity, Rome is perhaps one of the most compelling historical societies to date, and one whose legacy will undoubtedly endure for generations to come.

Mirroring the impressive reputation of their motherland, coins hailing from ancient Rome are similarly revered and have become some of the most sought-after and difficult-to-find pieces on the market today.

One of the rarest groups of Roman coins an investor can amass is what’s known as “The Twelve Caesars.” A complete “Twelve Caesars” set includes 12 individual coins, each reflecting the reign of a Roman ruler from Julius Caesar to the Empire’s eleventh leader, Caesar Domitian. Different rulers produced coinage in different quantities of precious metal, and as such, “Twelve Caesars” sets can, and often do, contain varying combinations of gold, silver and bronze coins.

“The Twelve Caesars” as a group was made popular by Roman historian Gaius Suetonius Tranquillus, who penned biographies of each of the 12 men in his famed publication, De vita Caesarum, or more colloquially, “The Twelve Caesars.” Because of its poignant perspectives and unique insights, this body of work is widely regarded today as one of the greatest literary achievements of antiquity. 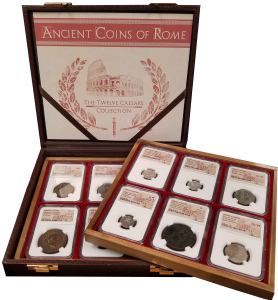 Due to the significant scarcity of some "Twelve Caesar" coins, completing a full set can often be a difficult and time-consuming feat.

Being late adopters of hard metal money, the Roman government brought gold, silver, bronze and other metallic pieces to its populace only around 300 BC. While not necessarily economically motivated, the introduction of coins was presumably more a way to emulate mighty Greece, a society often looked to by the Romans for cultural inspiration. Although Roman coinage experienced little use at the beginning of its tenure, it would continue to grow in economic, and perhaps to an even greater extent, cultural significance as time went on.

At least until the early years of Rome’s empirical era, the responsibility of producing the country’s money was charged to private individuals called “Moneyers,” who were officially permitted to carry out such work.

Before Julius Caesar, Moneyers designed coins primarily with images of ancestral figures, traditional deities, and scenes from mythology. In 44 BC, images of living individuals became legal to strike on coins, kicking off a long tradition of Roman rulers gracing one or both sides of the hard metal pieces. Julius Caesar's was the first such coin to embody this practice, bearing an image of himself on one side, and his adoptive son and future first Emperor of Rome, Gaius Octavius (or Caesar Augustus), on the other.

As Rome transitioned from a dictator-led Republic to a full-blown empire, the tradition of coins bearing images of living people grew stronger. The pieces became important means of educating the public on Rome’s current rulers, often also attempting to bolster the leaders’ reputation through association to deities and even attribution of divine-like characteristics to the leaders’ images.

The empirical period, which is arguably the most familiar of Roman eras, was preceded by the perhaps lesser known Roman Republic – the style of governance the very United States is in many ways modeled after. The famous Julius Caesar served as the Roman Republic’s last dictator until his murder in 44 BC, which effectively ended the Republic altogether and led to the rise of the Empire. His successor and adoptive son, Augustus Caesar, took to the helm as dictated by Julius’s will, becoming the founder of the Roman Principate and first Emperor of Rome.

Enduring periods of peace and war, geographic expansion, political and social clashes, and many other defining moments, the Roman Empire lived on under the influence of many subsequent rulers for about 1500 years, an impressive run three times that of the preceding Republic.

Regardless of its state of affairs, be they peace and prosperity, conflict and hardship, or a combination of the two, the Roman civilization is one whose lasting legacy will undoubtedly stand the test of time.