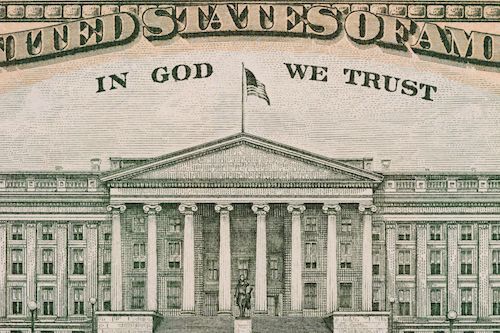 On October 26, Former Treasury Secretary Steven Mnuchin spoke at Saudi Arabia’s Future Investment Initiative (FII) conference in Riyadh. Mnuchin believes we are in a recession. He thinks it will last for about two years.

“I think you are going to see inflation in the U.S. will begin to come under control, and it will probably be a two-year period,” Mnuchin said. “But you’re going to begin to see that tightening relatively regularly. And I think people are overestimating the Federal Reserve’s actions just as they underestimated it.”

Mnuchin’s words differ from current Treasury Secretary Janet Yellen’s. In a recent CNN interview, Yellen said, "inflation is unacceptably high," but also said, "I don’t see signs of a recession in this economy at this point. We have unemployment at a 50-year low. There are two job vacancies for every American who is looking for work. We have solid household finances, business finances, well-capitalized banks, and we’ve been creating, on average, 300,000 jobs a month.”

Yellen acknowledged unacceptably high inflation but also stated that household finances are solid. How do the conflicting ideas mesh? The contradictory statements imply high inflation, but most households are only minimally affected. CNBC reported that 63% of Americans live paycheck to paycheck and 66% of workers are financially worse than one year ago. The National Retail Federation surveyed consumers in late September about the affordability of Christmas/Winter Holidays. 43% of respondents say they don’t earn enough to cover the costs of gifts and other holiday items this year. These consumers said they would be dipping into savings (40%), taking on credit card debt (32%), and selling assets (22%) to pay for the holidays.

Higher interest rates are used to encourage savings and decrease debt-based purchases. 43% of consumers plan on emptying savings, using increasingly more expensive debt, and selling assets (probably at a loss) to afford the holidays. The behaviors people are choosing are the worst possible strategies and the opposite of what rising interest rates are supposed to accomplish. Suppose Mnuchin's view is correct that we are already in a recession. We should expect about two years of pain. Higher credit card debt and lower savings are a recipe for disaster if the worst is still in front of us.

Secretary Yellen stated that businesses and banks are well-capitalized. Perhaps she needs to read this blog or see a stock chart this year. There are many signs we are in or close to a recession, severe economic downturn, market correction, less-than-trend growth, or whatever you may want to call it period of financial challenges. Earlier this year, Secretary Yellen admitted she was wrong about the path inflation would take. With all due respect Madam Secretary, you are making another mistake about the economy’s health and what is next.

As they say about opinions, everyone has one. The former Treasury Secretary thinks we are in a recession, and the current Secretary doesn’t see any signs of a recession. They both can’t be correct. Both Secretaries have impressive resumes and fancy educations. Secretary Mnuchin graduated from Yale, and Secretary Yellen graduated from Brown. Despite their experience, education, and access to the most recent and accurate data, they draw different conclusions about what is truly happening and what is about to happen.

Since both Secretaries come to wildly different conclusions, we must ask some questions and think for ourselves. There are a few essential questions. Is there any reason to believe one or both parties are intentionally or unintentionally misrepresenting the facts? Does either person have a personal benefit or potential loss for the electorate believing things a particular way? Do I care? How does it affect me? What do I need to do?

Most people don’t care about Secretary Mnuchin and Yellen’s opinions. I don’t. However, the issue is whether the economy is in a recession. The thing everyone should do is think about that issue and formulate their own opinion. People act upon what they believe. I believe the economy will probably get worse before it gets better. It is still an opinion despite researching and presenting facts, news, and charts every day. I could be wrong in my interpretations.

My belief is my best attempt at interpreting the facts, i.e., an opinion. My belief has led me to buy precious metals faster than at any other time in my life. I began investing in precious metals in 2012. I bought more precious metals in 2021 and 2022 than in all the other years combined because I am acting on my belief that economic judgment and pain are coming. However, my opinions have nothing to do with your finances. Your opinions will shape your financial behaviors, strategies, and mindset. What is your opinion?

Do you think we are in a recession? Do you think the Dollar will get stronger or weaker in the long term? Can we print our way out of debt? Do you think the Fed will continue raising rates to destroy market demand like they said they intend to? Do you think a day will come when the world chooses a currency other than the Dollar? Will digital or tangible assets protect you better in a financial crisis?

What is your opinion about the direction of the economy? Do you agree with President Trump's Secretary or President Biden's?