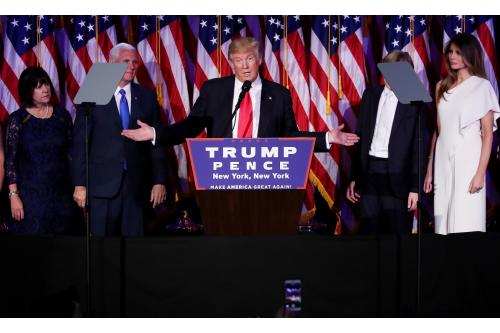 Posted in: Investing , Gold
No comments

The election of Donald Trump to be the next President of the United States surprisingly sparked a sell-off of gold after a very brief uptick in the spot price of the precious metal. Investors fled from gold to dividend earning assets like the stock market. The result was record highs for the Nasdaq Composite Index, the S&P 500, and the Dow Jones Industrial Average. The Russell 2000 Index, which is the most common benchmark for small-cap to mid-cap mutual funds, rose 15 straight days since the election. The election of a pro-business, anti-regulation president has convinced investors that increased economic growth is imminent. Donald Trump plans to take dramatic steps to stimulate economic growth and these steps are likely to add to the U.S. debt. Investors who truly understand the value of gold, understand that it is largely an investment in the failure of monetary policy and the decreasing value of paper currencies. The national debt of the United States is about $20 trillion and mirrors the historic debt levels around the globe. Central banks are desperately attempting to create inflation by printing money whose value is based on nothing. The more money printed, the less valuable each dollar becomes. [caption id="attachment_7346" align="alignnone" width="300"]

Donald Trump[/caption] The recent good times for the stock market may be a reason to be pessimistic about the future of gold. In actuality, investors should see this as a “golden” buying opportunity. Gold is not a short-term investment, and those looking for a quick profit will likely be disappointed. It is an investment to hold for years and it is the higher inflation that President-elect Trump is likely to bring is actually good for gold. The value of the U.S. dollar and its purchasing power is decreasing thanks to inflation but the value of gold is actually increasing in value. Under Trump, taxes will be cut and infrastructure spending will increase. The result will be a larger deficit for the federal budget. The deficit increased last year alone over $1 trillion. Increasing the deficit in an attempt to stimulate growth will not address the debt crisis the country is quickly facing. National Debt and Likelihood of Default The United States has the largest amount of debt for any single country. It is roughly equivalent of the entire European Union, which is 28 countries. The debt is more than the United States produces in an entire year. In 1988, the debt amounted to only half of what was produced in a year. This is a strong signal that the U.S. could eventually have issues repaying their debt. [caption id="attachment_7349" align="alignnone" width="300"]

Fed Chair Janet Yellen[/caption] The U.S. debt is the sum of all outstanding debt owed by the federal government. Two-thirds of this debt is held by the public in the form of U.S. Treasury bills, notes, and bonds. The “public” in this instance is not just the American people but companies and governments. One-third of the national debt is intragovernmental debt. The Treasury owes it to various departments that hold Government Account securities. Trust funds like Social Security are the biggest owners. Although these have run a surplus recently, these securities will come due as more Baby Boomers retire. [caption id="attachment_7355" align="alignnone" width="300"]

What everyone owes for the National Debt[/caption] Every President borrows from Social Security. This increases the national debt. The surplus of revenue through payroll taxes on Baby Boomers in previous years was used to offset deficit spending. This debt must be repaid by increasing taxes when Baby Boomers retire. Causes of the National Debt There are a few different causes of the national debt. The first is the accumulation of Federal budget deficits. Each tax cut or new program adds to the debt. President Obama is responsible for the largest budget deficit. President George W. Bush had the second largest deficit. President Reagan increased defense spending, expanded Medicare, lowered taxes, and increased the deficit. All three of these presidents were confronted with a recession. Most believe, the U.S. economy will experience some type of recession during Trump’s presidency, likely increasing the national debt. Lastly, China, Japan, and other countries buy Treasuries to keep their countries currency low compared to the dollar. In this way, these countries are lending money to the U.S. who in turn keeps buying their exports. The Impact on the Economy The debt-to-GDP ratio increases as deficit spending mounts year after year. Holders of the U.S. debt can begin to require a higher interest rate based on the increased risk they will not be repaid. This decreases demand for Treasuries which increase interest rates. When interest rates rise the economy begins to slow. The decrease in demand for Treasuries causes the dollar to lose value which further decreases the demand for Treasuries. Foreign countries turn to investing in their own countries causing increased payments amount by the United States just to cover the interest on the U.S. debt. What would really happen if the U.S. defaulted on their debt? Similar to the financial crisis of 2008, companies would quit hiring and the unemployment rate would rise. For reference the unemployment rate from December 2007 to December 2009 increased from 5% to 9.5%. Banks would stop loaning money, stock market prices would drop and likely put the nation into a recession if not depression. Dollar Goes Down, Investments Go Down, and Prices Go Up There would be a mass sell-off of the U.S. Dollar and that would threaten the dollar's standing as the world’s reserve currency. The buying power of the dollar would significantly decrease and everything from groceries to gas would be become drastically more expensive. During the financial crisis of 2008, the S&P 500 lost 37%, devastating 401K plans especially for investors heavy in the stock market. Wall Street analysts believe the U.S. defaulting on its debt would cause the market to drop 10%-20%. Bank Operations Stop American banks own about $2 trillion in government-backed debt. If the U.S. defaulted on its debt, Treasury and related securities could wipe out U.S. banking equity. The result would be bank lending to the private sector would cease immediately, existing loans would not be rolled over and immediate repayment would be demanded. Global Markets Collapse China and Japan who hold the largest amount of U.S. Treasury debt, $1.28 trillion and $1.14 trillion respectively, would see the value of their reserves depleted as a result of the U.S. defaulting on their debt. The decrease in reserves might cause a sell-off of their ownership of American debt and likely cause global panic. [caption id="attachment_7352" align="alignnone" width="300"]

Donald Trump speaks to supporters as he takes the stage for a campaign event[/caption] You are probably thinking that the U.S. would never default on their debt but did you ever really think Donald Trump would ever become president? He was a longshot to even get the Republican nomination much less become the president. Point being, it’s a possibility. The presidential math simply does not work for the long-term well-being of our economy and country. To put it simply with the expanding national debt, the likelihood that the U.S. will default on their debt in the future increases. This increased risk of default is good news for those savvy enough to invest in gold now. As the U.S. dollar continues to decline in value, the one constant store of wealth will be gold, just as it has always been.
December 5, 2016
Did you like this post?
0
0
Search The Blog
Categories
Recent Posts