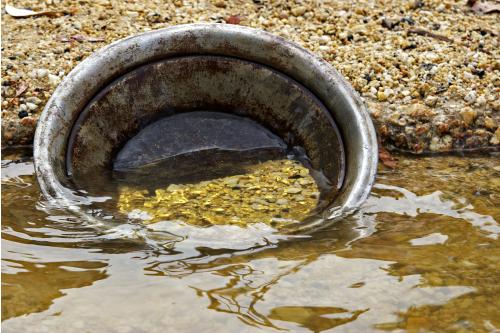 Tales of ambitious trailblazers striking it rich in the California Gold Rush of the mid-1800s loom large in our national narrative. While there are countless uplifting stories of these pioneering souls peppered throughout our history, there are also many aspects of the Gold Rush era that get drowned out by the glitz and glam of the “strike it rich” lore. To celebrate the 171st anniversary of the California Gold Rush on January 24th, we’re diving into some of these lesser-known facts and bringing you our top 8 things you may not know about the discovery of gold in America.

The first U.S. gold discovery was not in California, nor was the Gold Rush the first time gold was discovered in California.

While perhaps colloquially thought of as the first time gold was discovered in America, the California Gold Rush did not mark the initial unearthing of the precious metal in the country. Sometimes referred to as the first “world-class” event of its kind, the California Gold Rush was instead when large-scale gold production first came into play. In fact, gold mining had been happening in the U.S. since gold was discovered in North Carolina in 1799 on the Reed farm – a whole 50 years before the California Gold Rush gets underway. Even before that point, minor domestic gold production took place – also in North Carolina – as early as 1793. The California Gold Rush kicked off on January 24, 1848, when American carpenter and sawmill operator, James W. Marshall found pieces of the precious metal at the construction site of the soon-to-be Sutter’s Mill in Coloma, California. Before Marshall's discovery, gold had already been found in the region by a native Californian named Francisco Lopez. In 1842, while attempting to track down a herd of lost horses, Lopez discovered a gold nugget in a bundle of onions he dug up from the banks of a small creek. The site was located in what would later be known as Placerita Canyon, about 30 miles northwest of present-day Los Angeles. He went on to unearth even more gold from the site, compelling him and others to continue and also expand their search to nearby areas.

California was still part of Mexico when its Gold Rush began.

When the California Gold Rush kicked off in January 1848, the region was technically still part of Mexico, although it was under American military control as a result of the Mexican-American War. The war would end a little over a week later on February 2, 1848, with the signing of the Treaty of Guadalupe Hidalgo. Upon initiation of the treaty, California became a possession of the United States, although it was never a formal “territory.” The region wouldn’t become a state for another two and a half years.

The increase in population from the Gold Rush directly led to California’s statehood in 1850.

After all was said and done, the mid-1800s Gold Rush drew approximately 300,000 new residents to California. Most newcomers migrated from other parts of America, but some came from foreign lands including the Sandwich Islands (present-day Hawaii), Mexico, Peru, Chile, Britain, Europe, Australia, and even China. As a result, demand for a more representative and functional regional government grew, eventually necessitating the formation of a Constitutional Convention in 1849. A constitution was drafted and adopted the same year, followed by California officially becoming a state the following year. The granting of statehood was part of the Compromise of 1850. A few years into the Gold Rush, most of the easily accessible gold – which was collected by simple panning or other low-grade methods – had been obtained. This increasingly smaller supply led to tensions among miners, and many foreigners were eventually driven out of the gold fields by American workers. Chinese immigrants endured some of the most extreme animosity, with cases of violence and blatant racism wielded against the group. Continued antagonism toward foreigners eventually led to legislative restrictions on the earnings or operations of non-American miners, including the Foreign Miners Tax, passed by California’s first legislature in 1850, and later, the Chinese Exclusion Act. While one could argue that the California Gold Rush is generally thought of a positive occurrence, many negative repercussions were felt across the region. The sudden surge in mining operations put tremendous strain on the natural landscape and indigenous peoples. Catastrophic natural disasters ensued, and the decimation of many Native Americans came about as direct results of the rapidly changing environment of California.

California’s large-scale agricultural industry was born out of the Gold Rush.

Some early Gold Rushers were lucky enough to "strike it rich" in the Golden State, but most hopefuls were left with nothing to show for their efforts. Many migrants packed up and headed back home after trying their hand at prospecting, but others decided to stay, transitioning from the gold fields to the crop fields. Between 1859 and 1929, the number of California farms increased by about 700 percent, and the real value of the state’s crop yield increased by more than 25 times. The first widespread farming in the Gold Rush era was that of wheat. The combination of California’s flat, fertile terrain and moderate climate proved ideal for growing impressive levels of grain. By the mid-1850s, California’s crop output surpassed the consumption capabilities of its local market. As a result, much of the state’s yield was shipped to European markets, leading to California’s reputation as an integral part of the world’s food supply. Mid to late-19th century California farms were the birthplace of many labor-saving, growth-geared technologies. However, decades of focusing solely on production and scale led to a period of stagnation in other business areas such as cultural practices, new or diversified crop varieties or even simple quality maintenance. As a result, it was clear by the 1890s that nearly 50 years of monocrop production took its toll on the land, resulting in lower and lower yields. In the next couple of decades, California’s farming industry would shift from large-scale ranching and grain production to smaller-scale fruit farming, catapulting the state, once again, to the forefront of the global produce supply.

The terms “Mother Lode” and “Forty-niners” were coined during the California Gold Rush.

The California Gold Rush was by far the most expansive event of its kind in the U.S and perhaps even the world to date. With California being the largest producer of gold in the United States, it earned the moniker, the “Mother Lode,” indicating its superior supply levels of the precious metal. While it’s easy to mistake “Lode” for its homonym, “load,” the word refers to a natural resource ore deposit, known as a lode. The name “Forty-niners” was given to the vast wave of immigrants that flooded into the state in 1849 in search of gold. While the California Gold Rush technically kicked off in 1848, it wouldn’t be until the following year that thousands of migrants – over 100,000 of them – would be lured by the dream of striking it rich to the hills and valleys of the American West Coast. The name “Forty-niners” reflects the year 1849 when peak levels of immigration were seen.

We’ve all seen images of those enterprising souls panning for gold by hand in the banks of rivers and streams. While this is indeed how gold recovery started in the California Gold Rush, such low-grade methods would quickly become outpaced by more advanced, larger-scale techniques capable of processing larger and larger amounts of earth in shorter and shorter amounts of time. Early gold sourcing shifted from individual-level panning to more advanced placer mining by about 1855, which often required groups of miners operating cradles, rockers, long-toms or sluices. Coyoteing was also popular in the early advancement period of gold recovery. It involved digging a 20 to 40-foot shaft into placer deposits along streams or rivers and supplementing that main shaft with by additional tunnels extending in all directions, allowing miners to reach the richest areas of the earth. The next stage of advancement set in by 1853 when extraction graduated to hydraulic mining methods. Approximately 11 million ounces (343 tons) of gold were amassed using this method. The end of the Gold Rush did not mean the end of gold in California. Even after the Gold Rush fizzled out, the mining industry continued its innovation streak. By the late 1890s, dredging – which entails processing large volumes of earth scooped up from the beds of water bodies – was an economical approach to gold recovery, leading to approximately more than 20 million ounces (620 tons) being retrieved. That’s nearly twice as much as with the previous hydraulic phase’s yield. Hard-rock mining also surfaced as a viable, albeit involved, means of retrieving gold both throughout and even after the Gold Rush. Digging, blasting, crushing and chemically processing hard-rock deposits are all part of this approach, which can require advanced equipment, elaborate infrastructure, large teams of people, specific scientific expertise and large sums of capital to execute and maintain.

Merchants – not miners – were the big winners of the California Gold Rush.

Recent studies have confirmed that the big money-makers of the 19th century Gold Rush were not the miners seeking the gold, but rather, the merchants who set up shop to supply, outfit and otherwise sustain those miners. Samuel Brannan, a San Francisco newspaper publisher, and shopkeeper publicized the news of James W. Marshall's gold discovery at Sutter's Mill and quickly headed up to the Coloma area to set up shop selling prospecting supplies. He was the first to open supply stores in Sacramento, Coloma, and other prospecting towns, and eventually became the wealthiest man in the entire state during the early Gold Rush years. Other shrewd entrepreneurs followed suit, and eventually, it came to light that those shopkeepers were the ones who actually struck it rich in the California Gold Rush.

Levi Strauss was lured to the West Coast during the Gold Rush – although not initially to sell his famous jeans.

One such merchant lured to the American West during the Gold Rush was the legendary Levi Strauss. The Bavarian-born Strauss was one of five children who, at the age of 18, moved with his two sisters to the United States, where their two brothers had already settled and opened a wholesale dry goods company in New York City. The company was called, “J. Strauss Brother & Co.” News of the booming California Gold Rush spread quickly across the country and soon reached the shores of the East Coast. Levi Strauss saw this rapidly emerging industry as an excellent opportunity to establish a West Coast outpost for his brothers’ business, although he differentiated it from its East Coast counterpart by naming it “Levi Strauss & Co.” It wouldn’t be until after the Gold Rush in 1873 that his legendary, all-American blue jeans company would be born.
Posted in: Investing , History , Gold
Did you like this post?
0
0
Search The Blog
Categories
Recent Posts